Part of the joy of toy soldiers is scouting for the sort of cheap plastic toys in pound stores and toy shops that link back to my childhood – Cowboys and Indians, Knights and what Americans (after the Toy Story film) call “green army men”, pirated copies of various ‘army’ soldiers.

Pirate  and buccaneer figures themselves were once a rarity, now more easily available. Perhaps they are a modern alternative to Cowboys and Indians, maybe nowadays a little more PC than playfully recreating Wild West-ern genocide?

I have enjoyed browsing through the  wonderful Small Scale World blog as it celebrates many of these cheap plastic toys, mass produced and branded Hong Kong or now China. These were not ‘proper’ (i.e. expensive) Britain’s Deetail, Airfix or Matchbox figures. They were affordable, erratic of supply and of an odd mix of scales and nations. 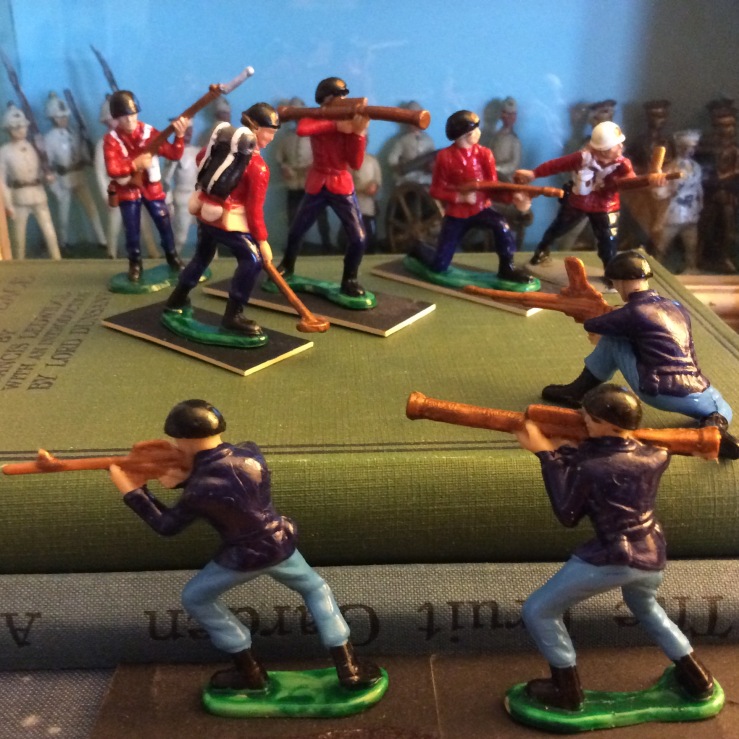 They have been slightly Steampunked into the futuristic Victorian or Edwardian imagi-nations. Bronze or brass colours are used for weapons.

If redcoats had bazookas, flame guns or mine detectors …

This rough paint work can be seen on some of the more bashed, less expensive paint quality jobs for vintage  “soldiers of tin” or “soldiers of lead“, some of which can be seen in my glass cabinet behind. Some of the cheapest finishes (glimpsed far right in cabinet) were simply painted gold. These for many were some of the basic troops that many men and boys would use to puzzle out or play out their versions of H.G. Wells’ Little Wars at floor or table level.

I was always pleased as a child or young solo gamer to recognise plastic figures in my toy soldier collection that featured or were photographed in gaming books and magazines.  It somehow made me feel more connected to this mysterious adult world of rule books  and expensive metal figures, figures way beyond my resources and pocket money. (Many of the  rule books were also way beyond my maths ability, way of thinking and chosen style of simple gaming).

Thankfully many Donald Featherstone books from the local library, if not permanently booked out and borrowed,  occasionally pictured affordable Airfix plastic figures, often interestingly converted or reused out of period. A real encouragement and a lifeline.

I was interested looking through the links and blog roll on the crafty, innovative and always interesting Wargaming Miscellany blog  by Bob Cordery to see a “Funny Little Cold Wars” game using some of the same plastic figures as above and wonderfully outside on http://megablitzandmore.blogspot.co.uk

Another website I have enjoyed browsing is the Battling with Britain’s blog site, a great and cheerful improvisation with Britain’s  Deetail figures that many will remember fondly. Expensive figures at the time though,  but the innovative mix of figures and periods on this weblog are something I feel H.G. Wells would recognise or approve of in his Floor Games or Little Wars.

Muddy green and grey are not my favourite colours, hence the more glossy or garish plastic troops above. Enjoying some of the above blogs, I realise how Garden wargaming has long seemed a way back to the imaginative but muddy, strangely out of scale ‘real plants and dirt’ of childhood garden games,  crawling around on lawns, paths and among flowerbeds; that must be the subject of another blogpost.