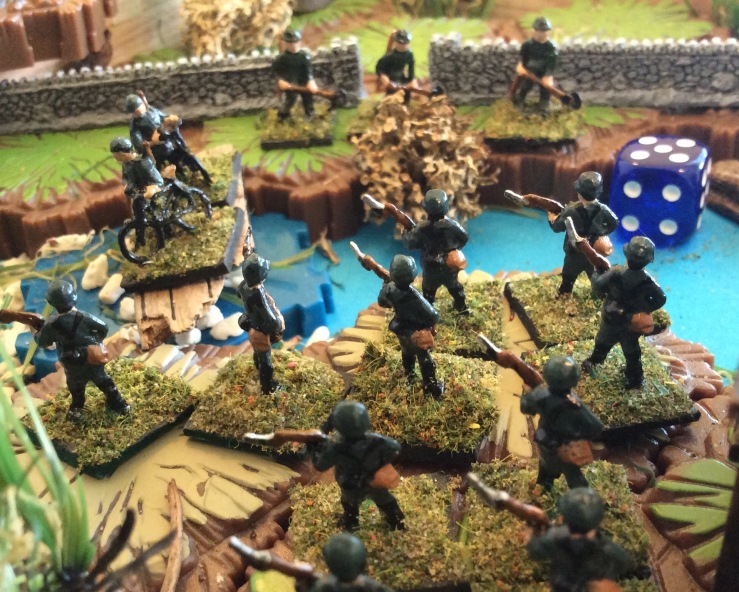 I wanted to fight another skirmish over the hex terrain portable game board that  I had laid out for the American Civil War skirmish a few weeks previously.

I also wanted to test out a platoon level infantry scrap with few heavy weapons and almost no vehicles using a mash up of Donald Featherstone’s ‘Close Wars’ appendix rules to his 1962 War Games with a few additions from his simple WW2 rules in that book.

A lucky find of some Peter Laing WW1 / WW2 figures (lots of Sapper figures) amongst a job lot of 15mm WW2 figures of various manufactures gave me just enough for a small platoon level skirmish. Sappers and others  had rifles added by me from finely carved slivers of wooden coffee stirrers.

This gave me a scratch force of British infantry:

Three 5 man sections of pioneers or sappers with rifles and shovels (handy in a scrap!)

Versus a much larger but slightly lightly equipped German infantry group:

A larger infantry force of German infantry consisted of:

The game was played solo over two evenings with a skirmish figure scale of 1 figure = 1 man.

Indirect artillery fire could be plotted in using this grid system and dicing to see which turn this lands but none was used in this game.

The Germans started with their reconnaissance troops (3 rifle equipped bicycle troops) in place at the river crossing and to the North a British 5 man pioneer unit of sappers and officer and the Bren Gun team on the board.

To speed things up, no casualty savings throws were used after Melee.

In Turn 1, Germans moved first and shots were exchanged without casualty between the British motorcyclist and the German cycle troops who were behind the cover of the stone farm walls.

In Turn 2, the British despatch rider was not so lucky!  In turn the first British  rifle volley brings down one German infantryman.

Playing solo, deciding which of the two possible British infantry targets the German troops fire at is decided by dice throw: roll 1 to 3 aim at Bren gun team on left, 4 to 6 at British infantry on right.

The terrain is the same portable hex wooden box lid territory as used for the American Civil War skirmish, but with the house location moved and a small wooden hut used instead.

The high rocks and the forest either side of the river are deemed impassable, the river unfordable. This concentrates the efforts into dominating the crossings and the ground between them with all available firepower.

Turn 3 sees more infantry on each side appear on the game board. Line of fire is checked with a reversed Lionel Tarr style periscope (from another appendix in Featherstone’s 1962 War Games).

Turn 4 sees the British  move first and a further British  rifle squad appear near where their despatch rider was killed. They close in melee with the German cyclists and two are killed for the loss of one British infantryman.

Turn 5 sees more German troops emerge onto the board. The German motorcyclist emerges onto the board only to be blocked and killed in melee with three British Infantry. 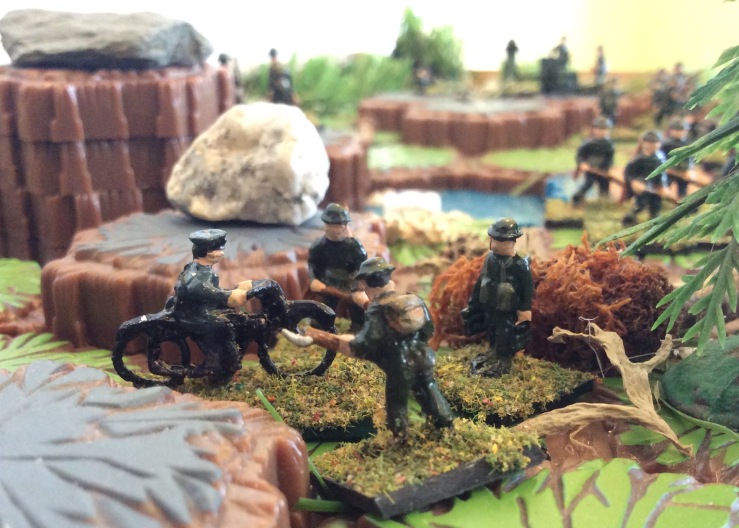 One of the British Bren Gun team is hit – I diced quickly to see if another nearby British soldier could help man the gun and it to remain operational. It did and brought down a German infantryman, as did the light field gun. Fortunately for the Germans the British light mortar team is just out of range.

In Turn 6 the German Light Machine Gun MG34 and light mortar teams (each of two men) make it onto the Board at G and J on the German / South side of the river. 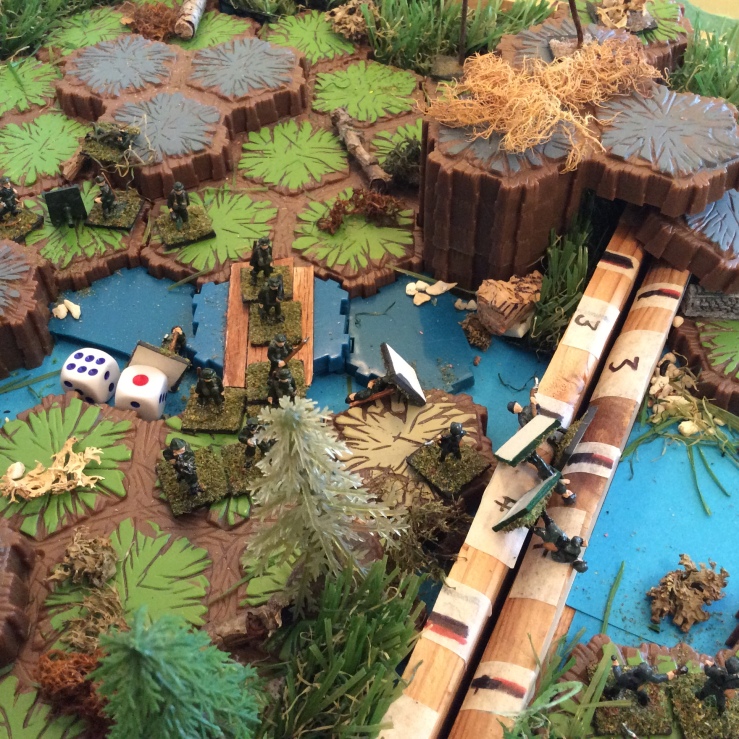 This mortar team in Turn 7 take out one British infantry, whilst melee and rifle fire take out 3 German infantry and 2 further British.

The forest, impassable scrub, rocky ridge and river crossings continue to create safe spaces or bunchings but once the mortars come into action, lobbing their shells over trees and obstacles etc, these safe spaces are no more.

The British field gun is a board game piece from childhood.

By Turn 9 , a stalemate has set in – the British mortar team from behind cover takes out the German Light Machine Gun team. Positions are consolidated. Both sides have lost their officers.

If the German infantry remain in the cover of the hut, they will eventually be killed by the 2 pounder which is just out of rifle range.

In Turn 10, the German mortar team move closer towards the British position whilst four German infantry take cover behind the stone wall to give themselves a better field of fire onto the British dominated bridge, should anyone try to cross it. Many of the German and British troops  are now out of sight of each other and out of rifle range.

A lucky ‘counter battery’ hit by the British mortar team on their German rival reduces the last opportunity of the Germans to dislodge their opponents without a fatal rifle charge.

Turn 12 – the German infantry dice to advance or stay put. They stay put but a further German infantryman in the hut is then killed by 2 pounder fire.

By Turn 14, one of the British mortar team is hit crossing the British sector bridge. The last German in the hut retreats over the German bridge behind the stone wall.

3 Germans killed are crossing the bridge under rifle and gun fire; the bridge is destroyed (d6 1-3 destroyed, 4-6 intact). In the return fire, a further British infantryman is hit.

Turn 17 – German infantry retreat behind wall out of rifle range, their bridge blown.

The game is at an end, nominally a British victory but  all depends on whose reinforcements turn up first.

The increasingly dominant force in this game were the heavier weapons – mortars, light machine guns and the light field gun. It would be interesting to play / replay this game at rifle squad level without (some of) these other weapons.

This and the restricted terrain created the shape and the pressures of this solo game.