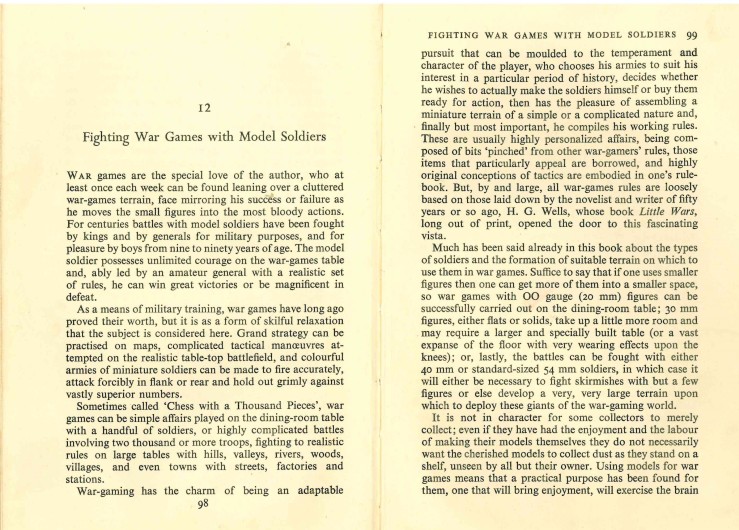 Stephen Briddon, one of my blog readers, asked about an ‘elementary ‘ set of Donald Featherstone simple WW2 or Moderns rules that I had mentioned. These were first published in a chapter in his 1963 book, Tackle Model Soldiers This Way.

They prove an interesting comparison with his War Games published the year before in 1962. He keeps to the same periods, Ancients, Horse and Musket and WW2 Modern.

“It should not be thought that the only types of war games are those for which elementary rules are given here, that is for battles in the ancient oeriod, horse and musket period and the modern game. There are many war-gamers throughly enjoying games which involve redskins and settlers, naval wargames  …”

“The easiest and cheapest method of fighting modern combat seems to be by using Airfix figures (these come in British and German infantry, plus British 8th Army and German Afrika Korps). By using a combination of these figures it is possible to end up with adequate machine-gun teams, anti-tank guns, whilst mortars are not too difficult to fabricate.”

There are some interesting differences and simplifications in these simple WW2 rules. Here modern troops are based in threes and rifles fire  in threes for example, rather than firing in a volley of five men as Featherstone usually does in his ‘horse and musket rules’ here and elsewhere in his WW2 rules.

Order of firing is an interesting idea here as well, useful for solo games.

In short, a lovely short inspirational chapter full of enthusiasm for the hobby. Hopefully it created lots of converts for the hobby!

It is a good short summary of his earlier book War Games, designed to create a cross market from one hobby / readership of toy of model soldier collectors to another of wargaming.

I know that Donald Featherstone’s 1962 War Games has been recently reprinted or available as  an ebook for a new generation of gamers by John Curry. I’m not sure if John Curry has reprinted these 1963 simple rules elsewhere in his Featherstone reprints.

I posted sections from another of these simple cross readership efforts,  a guest  chapter in Henry Harris’ book How to Go Collecting Model Soldiers, first published by PSL in 1969. https://manoftinblog.wordpress.com/2016/06/24/simplest-featherstone-rules-ever/

A short set of rules influenced by but  almost simpler than H.G. Wells’ Little Wars:

The whole of Donald Featherstone’s Tackle Model Soldiers This Way book  anyway  is worth tracking down on second hand book sites. 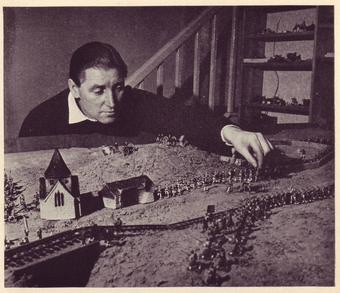