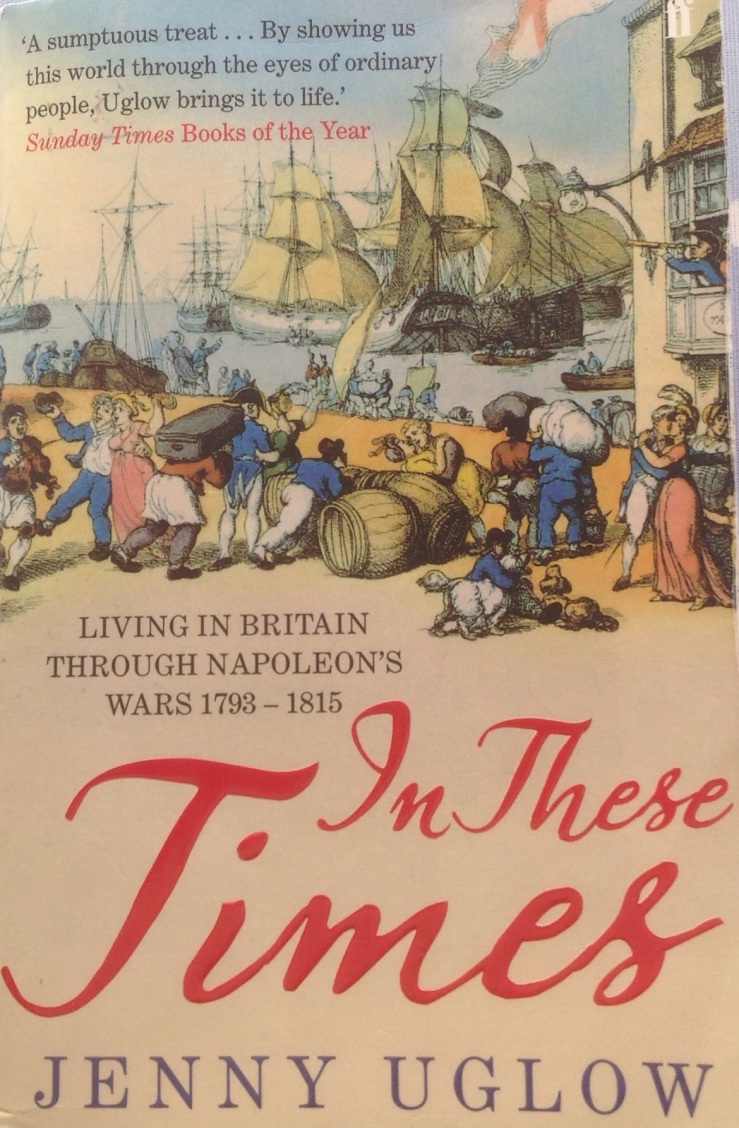 I missed this book first time round in 2014 in the run up to the Waterloo 200  Annversary, but was really interested to have finally read Jenny Uglow’s In These Times: Living in Britain Through Napoleon’s Wars.

The book is a social history of Britain and Europe throughout the Napoleonic Wars, covering events overseas from North America to Europe, naval battles and trade wars.

From the terror of the French Revolution and ending of slavery to riots at home and the threat of espionage and  invasions by the French, the book is well supported by diary entries, letters and the story of ordinary people as well as the notable figures of the day.

Georgian Britain is not an area I knew much about, having previously mostly read about the Victorians and 20th Century.

There are lots of interesting details about the Militia movement, how the arms industry expanded and reacted to the threat of invasion, the switch from peace to war, truce to war again as Napoleon and the French threat grew and receded.

I remember seeing the ghost marks and signs of the remnant of the gun making trade in Birmingham during its redevelopment, now vanished firms that would have sprung up with different companies and areas making the flint lock, wood stock and the metal barrel separately then bringing them all together for completion – “lock, stock and barrel”.

The book is rich in many of these interesting details.

The Volunteers from the invasion scare (including Robert Burns, mentioned in our blogpost recently) are also fascinating

If you wanted a “what if” scenario, it would be  a Napoleonic or revolutionary France invasion of Georgian Britain defended by its stout citizens, an  Opération Sealion  1780s 0r 1790s style.

Certainly a must-have history book for the wargamer, as well as for anyone interested in the social history of the period,  it makes for interesting reading as background to the dashing red uniforms that crop up in Jane Austen novels.

Jane Austen’s brothers Francis and Charles  were both in the Royal Navy. There is good coverage of the Royal Navy during this period, its equipping and maintenance, mutinies, careers, Nelson’s career and Trafalgar as well as Merchant shipping.

I felt like I had lived my way through two decades of conflict engulfing a whole generation or two by the time I had finished the book. To make up for missing the book on publication the first time round, as soon as I finished reading it the first time, I sat down to read it all over again!

Well worth tracking down.

2 thoughts on “In These Times”