Lots of steampunk Sherlock Holmes era self defence, umbrella duelling etc – don’t try this at home  – on this interesting website about E.W. Barton Wright, 1860-1951,  the inventor of Bart-itsu.

Bartitsu.org is a fascinating website or blog,  written by James Marwood since 2008, is a real labour of love, researching this once-forgotten pioneer of the martial arts.

How to use your cane and hat (shield ) to defend yourself – a short silent film by James Marwood.

I wonder how many manufacturers make these kind of gents and ruffians? 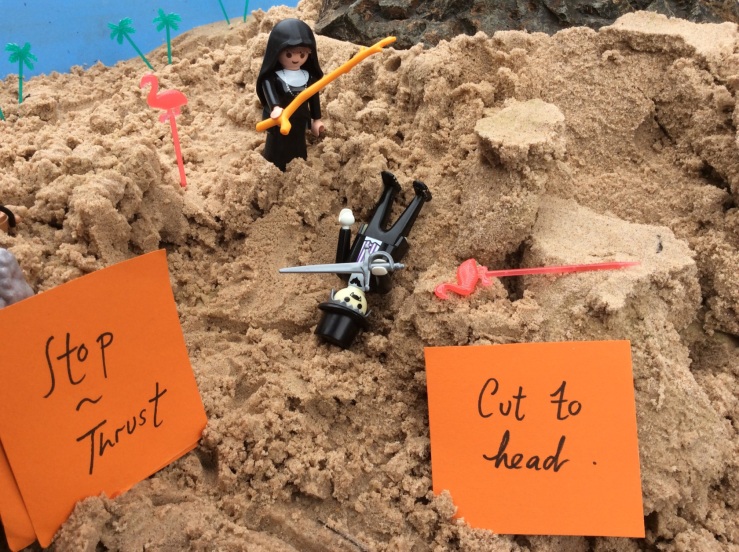 Playmobil certainly do top hat figures like Dracula. Somewhere amongst the many interesting steampunk and VSF miniatures, other figures might be found wielding sticks, umbrellas and walking canes etc. I searched the toy box and my collection for a few suitable figures:

A Match for Any Ruffian! Ladies Self Defence 1902 style

“The umbrella is distinctly a form of rapier; the husband-beater is a hand-and-a-half estoc (to be used in the saddle, if required); and the sunshade and parasol are short swords, or long daggers: and one and all are designed for thrusting— not cutting.

Yet how does the citizen use his characteristic weapon ? Why, as a broadsword—nearly always!”

Over almost a decade the Bartitsu website has thrown some interesting people nad pictures including:

The Simms Motor Scout, one of the world’s first armed motor vehicles?

I’m sure H.G. Wells would approve of Simms’ inventiveness and foresight. This 1899 invention narrowly missed deployment in the Boer War: “Because of difficulties, including a gearbox destroyed by a road accident, that arose during completion the prototype was not finished by Vickers until 1902 when the Boer War was over”. Now there is a “What If?” Boer War gaming scenario.  The French version with a Russian Army connection looks even more modern –  https://en.m.wikipedia.org/wiki/Charron,_Girardot_et_Voigt_1902

Noted Bartitsu historian Emelyne Godfrey has written several books and articles  on crime and self defence in Victorian Britain.

All fascinating stuff – don’t try Umbrella Fencing at home without suitable head protection  – from a website and area  which throws up lots of interesting duelling scenarios for Gerard Du Gre’s “Lunge, Cut and Stop Thrust” rules. 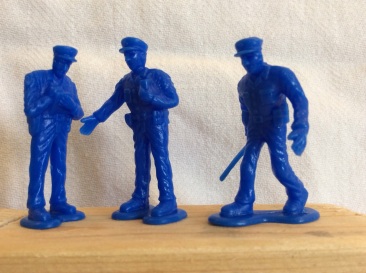 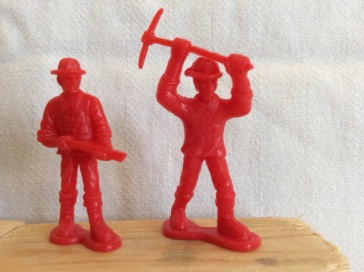 At last a gaming use for all those civilian figures, ladies with parasols, farmers with sticks, useless cameo cowboys and soldier figures  clubbing with rifles, drum majors with their batons etc.

Part of the role of the Militia in Britain throughout Napoleonic, Regency and Victorian times was crowd control, as set out in Jenny Uglow’s In These Times (reviewed earlier on this blog). Rioters, luddites and mobs of protesters often armed only with pitchforks, cudgels and tools would be broken up or scared off by calling out the Militia. The Riot Act would be read etc, etc.

The Militia  formed this role of suppression or public order before an organised police force in Victorian times. Jenny Uglow is very even-handed in her views on the British Government’s use of the Volunteers and Militia to suppress dissent or keep order during a surprisingly turbulent time of food riots, resistance of the press-gang, Highland clearances and labour disputes.

An Angrian police force or constabulary in top hat,  blue tail coat and cutlass  appear in the Charlotte  Bronte Angria juvenilia stories in her early Victorian  novella “Henry Hastings”. They are sent to all points of the compass, tracking down this escaped treacherous murdering deserter!

While some early top hatted policemen with their leather stock neck pieces (against garrotting gangs) carried a cutlass, traditionally British police have been unarmed. What is the police truncheon or American patrol officers night stick however but an extension of this Bartitsu type approach of self defence? Highwaymen beware!

Not forgetting those ever so useful handy Steve Weston Mexican Peasant figures, some of which would have a distinctively Boxer / Oriental / Street Fighting appearance with suitable painting. http://www.plasticsoldiers.co.uk/reg-pages/Weston%20Toy%20Co.

Off to track down some more useful ‘useless’ posed figures for more duelling in the mean streets, backyards, gardens and sandpits of my Imagi-Nations …

Meanwhile in the leafy Edwardian garden of my imagination 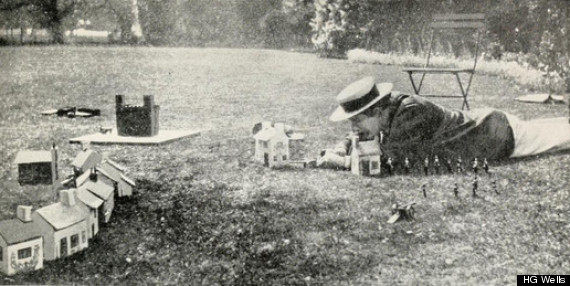 If  any Ruffian  snuck up on H. G. Wells in his garden whilst busy playing Little Wars, sorry I meant  researching his next book, no doubt Wells would snatch up a nearby garden cane, whip off his straw hat and Have at Them! En Garde-ns! 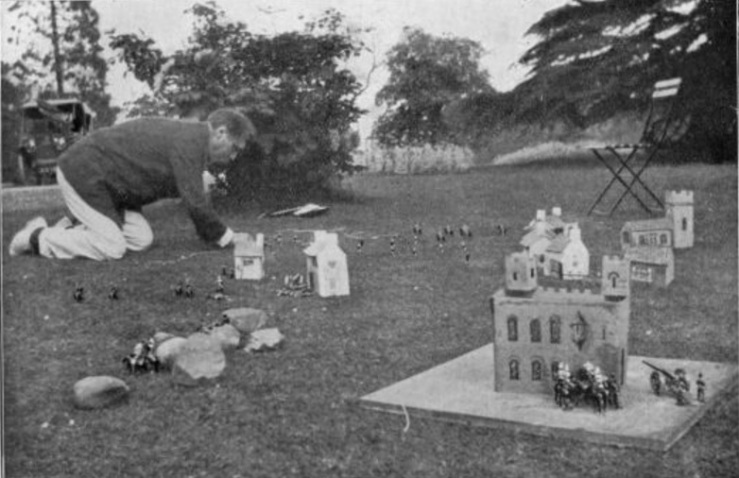