This made me think it was time to start work on another recent seaside gift shop impulse purchase that I saw and thought, “That might just be …”

It took me a while to work out exactly what the house was for. Looking at it outside the shop, hidden beneath its very reasonable price label of £6.99, I spotted a fairly obvious hole.

A hole which could be turned from looking through a “round window” into a “square window” (memories  of 1970s BBC Playschool flood back!)

I looked at this and thought that underneath the charmingly rustic addition of moss and pine cones, there was a simple solid little building, albeit one a little grand in its gables and roof work.

Maybe it could be a Wild West Train station? A mail or trading post?

It could be an excellently rough toy-like building for the wargames table or garden war game, representing a range of periods. With a little work …

It works with a range of figure scales from Lego minifigures and 40mm Prince August Cowboys through to 54mm.

A touch of Andrew Wyeth or Grant Wood’s American Gothic …

Short work with a craft knife removed the oversized blue hat, bird house, pine cone roof decorations, hanging string thread and twisty branch things. Much of it was originally hot glue gunned in the factory, so not too difficult to remove. I wanted to keep the rough and ready nature of the building and its materials

Some of this removed scrap was reused such as the staples, reused to hook on the removable Station and Stores signs, which were made from thin balsa wood. These hooked over the existing “Our Summer Home” Sign. In this way different language signs could be used for different scenarios. The new looking Balsa signs were aged by staining with a tea bag, confident that the lettering would not run as I used artists fine liner waterproof ink pens.

The separate “miniature bird house” on the pole is now an ornament in my kitchen.

The altered bird house entrance / round window can be seen here.

A simple square window was added to the rounded bird hole and the small round perch removed. This was glued at front as a log next to the giant axe. Small wooden patches of damage from removing items were repaired either by brown felt tip or coloured / stained coffee stirrer ‘patches’ superglued in place. Good and rustic.

Balsa, coffee stirrers, felt tip pens, and a bought bird house – all this saved me time, paint and mess especially having no workshop and few woodwork skills. Like Bob Cordery’s greyed dayglo castle, I may add some flock but the base feels like a wooden veranda or porch. 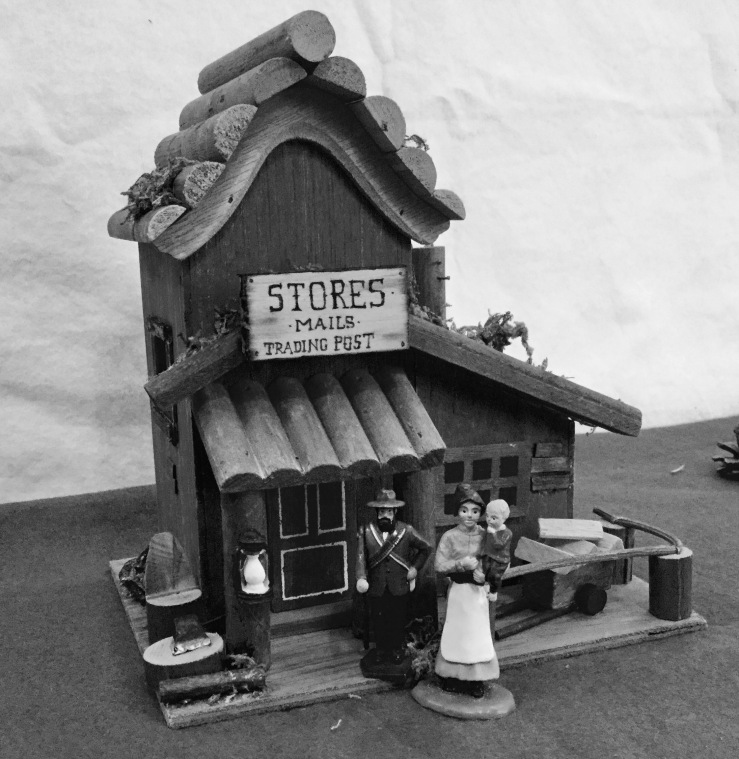 A happy bit of “Kit Bashing” on the kitchen table, which certainly saved me some woodwork. It should provide an interesting focus to a suitable backwoods scenario game.

If anyone asks what I do outside work, I can say I am now a proud home owner or property developer, renovating an interesting period property with no previous owners. 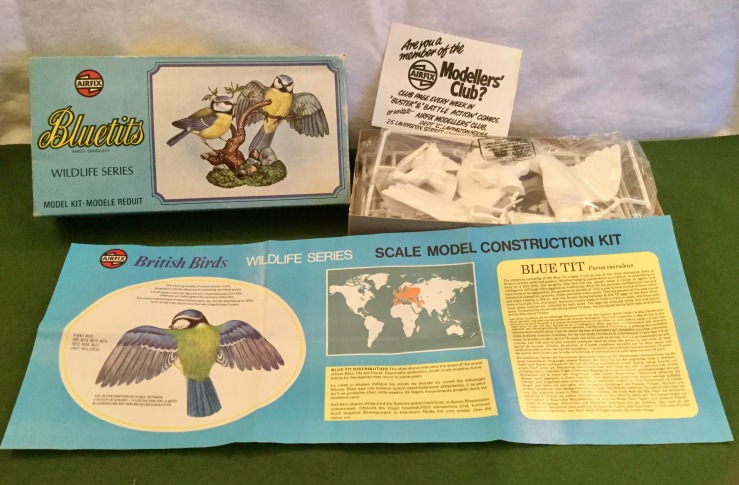 Or should I have painted up my carefully hoarded boxed 1978 Airfix Bluetits kit from their Nature Series and let them move in?