Part 2 – This Herald Infantryman figures reminds me of my late father’s many tales about his National Service days. 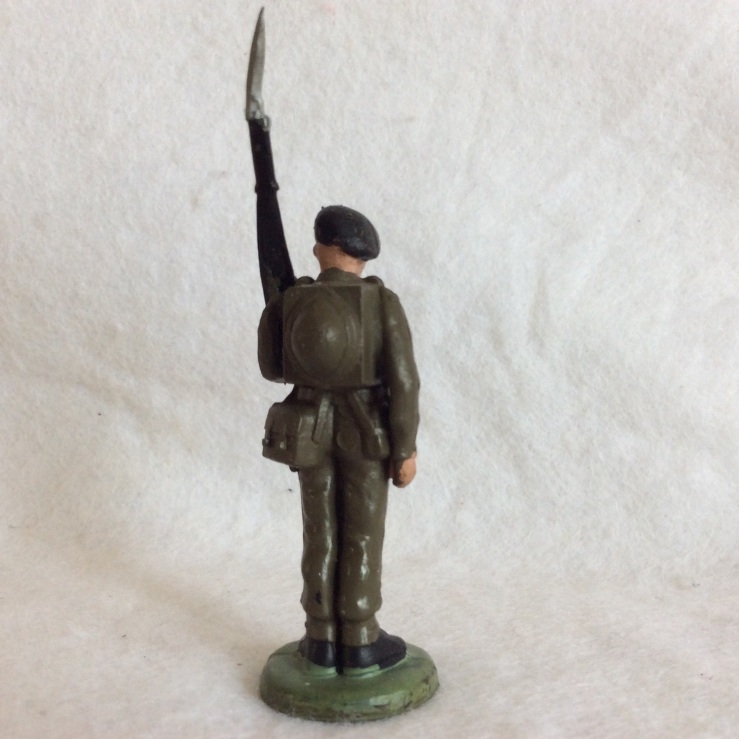 I love all the details of kit (helmet, pouches etc.) required on parade. All these would be wearily familiar to the 1950s  and 1960s National Serviceman like my father.

I recall seeing the shapeless uniform and beret of a National Serviceman in the Duke of Cornwall Light Infantry Museum at Bodmin and on visits with my Dad to the National Army Museum in Chelsea.

Dad told me how itchy this battle dress was and how they used to soap the insides to reduce this itchiness. It’s true – having worn battle dress trousers for a re-enactment event a couple of years ago, scratchy they certainly are! Boots were softened and broken in by peeing in them, leaving it overnight. How fragrant they must have smelt.

My late Dad as a lowly private was pretty philosophical about his National Service,  talking about it 25 to 30 years after the event. He understood that what they were doing by keeping you away from family, shouting at you, making you work or fail as a platoon, not wanting to be the weakest link etc. It was all about “breaking you down as a civilian” to build you up as a soldier who follows orders without question – he understood the cult psychology of training, which somehow made it easier.

One day he was up on a charge. His crime? Having his back pocket undone, whilst lying down on rifle firing practice at targets. Why? Next time, he was told, it could be an undischarged round in your rifle when cleaning. Attention to detail.

This photo from the IWM’s National Service collection reminds me of this training story and of my Herald British Infantry figures.

It’s odd how some of these wartime or army sayings make it into family life including from someone  my family their WW2 maxim that “Time spent on Reconnaissance is rarely wasted” (or “seldom wasted”).

Dad told me lots  of stories of his National Service Days, but sadly I can’t remember them all now, as he died almost 20 years ago. He never wrote them down or recorded them.

Stories of navigation training  and map reading, involving  an army lorry drop off in the middle of nowhere, tasked to find your way home using a compass and map. Who would be home first? He seemed to enjoy this as a bit of a country lark.

Stories of sleepwalking squaddies found by civil or military police wandering naked in the centre of Aldershot, having climbed over a barbed wire fence to get out of camp unobserved – the sentries on duty that evening got a rocket for that one.

Guarding the gatehouse and camp armoury against arms theft (by the 1950s IRA?)  Cycling back from leave, Dad said that you could wake the sentries up by holding your bike pump out and rattling it along the camp railings so that it sounded like a machine gun. That put the wind up the sentries!

Being in a technical trade (REME), Dad reckoned he could still strip down and reassemble a Bren Gun with his eyes closed in a remarkably short time of a few minutes. One day in the mid 1990s I saw a Bren Gun still crated, greased but deactivated. I was tempted for a few moments to buy it as an unusual retirement present. Similarly he could rattle off his National Service number many years later.

Wearing boots all the time will apparently give you weak ankles.

“Get a trade or a certificate so you have something to fall back on”, said this former REME Craftsman.

He seemed to spend a lot of his National Service time fixing the electrics of  tanks and lorries – it made him very practical around the house, competent with tools and DIY, something that didn’t get passed on to his cack-handed son. He was also pretty keen if any of were thinking of joining the forces to make sure we got a trade certificate for civilian life so we had something to help us bridge life into civilian work. This was probably from his experience of his working generation of former WW2 and National Service conscripts.

As my Dad was called up in the last few years of National Service in Britain and he said that they didn’t really know what to do with them all. He spent as a result a lot of time (once technically proficient at his trade) cycle racing for the British Army and doing the Isle of Man cycle TT, training and racing to the point of boredom for his former much-loved sport. Moral of this lesson, he said: “Never make you hobby your job!”

The endless 1970s sitcoms reliving the war from Dad’s Army to It Ain’t Half Hot Mum, along with National Service RAF comedy Get Some In!,  all of these brought back his National Service memories. The early Carry On Sergeant film  (1958) and Private’s Progress (1956) also brought back similar memories to be shared.

The youngest photo I have of my Dad is his REME platoon passing out photo, signed by all on the back, along with his discharge papers releasing him as a National Service / Territorial Army  Reservist a year or two after his National Service ended.

There are many other  interesting books about National Service including:

730 Days Until Demob! National Service and the Post-1945 British Army by Keith Miller,  2003 (which accompanied the National Army Museum exhibition?)

I have met many older work colleagues about whom you could sometimes tell that they had done their National Service in the 1950s and 1960s. Others you would never have guessed that they once passed muster and the scrutiny of a drill sergeant.

Some told you about it; some indeed thought me a bit scruffy and that I could be much improved by a spell of National Service or time at Sandhurst to smarten both me and my ideas up.

Stranger still,  some of my overseas student colleagues during my college days many years later were only a year or two older than me but had done national service and active service in their home countries ranging from the Middle East to southern Africa. They didn’t talk much about it. They were generally happy it was over.

“Demob happy” is still a National Service phrase that gets used 50 / 60 years later by many at work  about holiday leave or moving on to a new job. Likewise “Demob Suit” for something a little garish or very old fashioned or “Civvies” as well for your non-work clothes.

In a future part of this National Service Remembered blog post, I’ll show some of the  Herald figures that Dad and I used in our under the table floor wars or gardens wars (based on other postwar National Service era 1950s troops).

Many of these Herald figures look posed just like the  photos from a 1955 British Army infantry training manual that I have, which no doubt formed the content  of my Dad’s rifle training.

When the Falklands were invaded, my Dad jumped out of bed convinced like much of the Nation that these Islands were somewhere off the coast of Scotland and probably wondering not only why Argentina was invading Northern Scotland but also if 20 years on he would be recalled as a Reservist for Home Defence. Now where’s that National Service / Territorial Army Discharge Certificate …