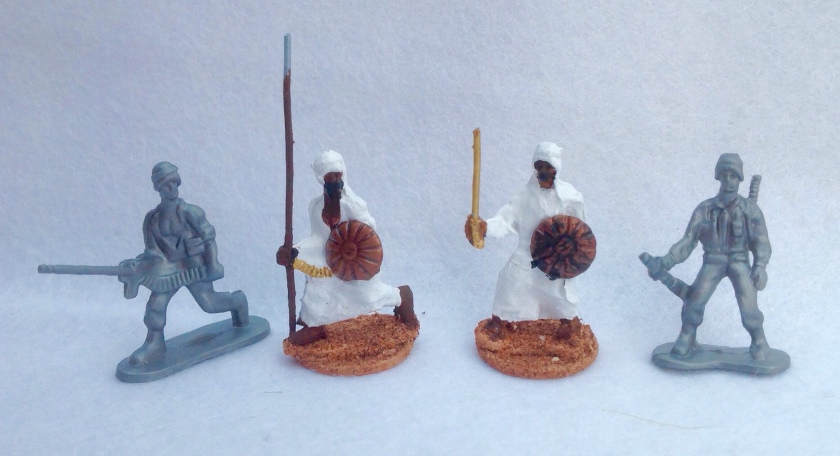 Some unprepossessing modern pound store plastic ‘penny’ figures (£1 for a tub of 100 or more recently 80 figures from Poundland) have proved great conversion potential for my skirmish games, at the slightly odd size of roughly 36mm.

Over the last few months I have been busy creating small skirmish forces of 25 to 30 figures a side for my portable hex game boards.

Some work in progress / ‘how to’ photos about these figures are shown here:

It has been interesting comparing how many simple conversions are possible with these same 12 sometimes crudely moulded figures, explored in this blogpost:

Some kilted Colonial Highlanders conversions to join my Redcoats, straight out of my favourite Carry On film, Carry On Up The Khyber with Private Jimmy Widdle of the 3rd Foot and Mouth, the ‘Devils in Skirts’ no less!

The same figures can be painted and converted into many different figures, like this versatile rifleman. This was another of the figures that attracted me to these pound store figure tubs.

And finally, a host of Little Green Men in orange and gold space suits to take on my silver and blue Space Marines 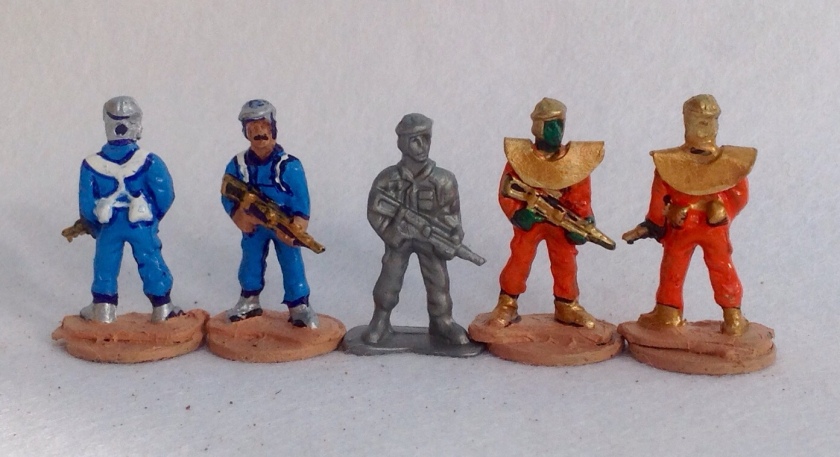 Coming soon to a hex game board near me …

Crossposted from my occasional Sidetracked blog by Mark, Man of TIN https://sidetracked2017blog.wordpress.com/2018/01/22/the-other-channel-tunnel-to-ireland/

A free gift from the wider family, this versatile cardboard packaging. Great that it isn’t unrecyclable plastic. Even better that it suggests lots of scrap modelling possibilities.

There are a few felt tip marks from previous play owners that will need a gentle paint disguise. Otherwise I will probably leave the blocks as they are for now. Any detailing would diminish them or fix a scenario  too much. They remind me of the desert and city scenery in Star Wars Rogue One.

They also work for multiple scales, another reason for not adding detail. At 54mm the deep pits make firing positions in an old fort or blasted village. At the 36mm scale of pound store plastic warriors, they are more like old tombs or excavations, an abandoned city in the Generic Badlands.

Being essentailly papier-mâché cardboard packaging, they may need hot glue gunning to some backing board and not leaving around in the garden. A thin brush over of PVA might waterproof them all.

When storage space becomes a problem, they “flatpack” back to cardboard with the happy aid of boots and into the recycling. 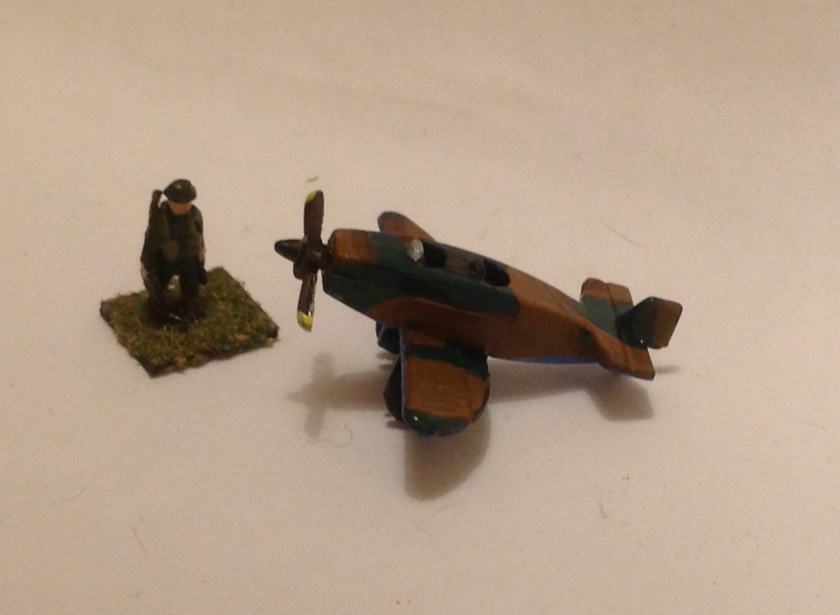 The  festive season has brought some gaming delights to be shared on the blog over the next few weeks. Usually crackers only yield up the occasional useful dice.

Some were unexpected delights like this Christmas Cracker derived air capability.

This tiny 5 part airplane kit is very useful, being about 15mm sized, especially after opening up the double cockpit to make a single seater.

I shall have to look about for a suitable Air Force type figure or two.

I don’t think Peter Laing ever made any 15mm aircrew, which I think a little odd.

Odd, considering that the scale of 15mm figures were accidentally invented by Peter trying to make figures for 1:144  aircraft. He produced a small range of WW1 vehicles and tanks but no planes.

Check out the Peter Laing Community  page on Google plus or this website for more about his WWI and WWII range.

This airplane story is mentioned in the December 1982 interview in Military Modelling, one of the filleted  magazines for useful article pages from my scrapbook. I found it really interesting to see who and where my figures came from.

The full article can be read at

More shots of the near finished aeroplane.

I have yet to work out what decals may be required. 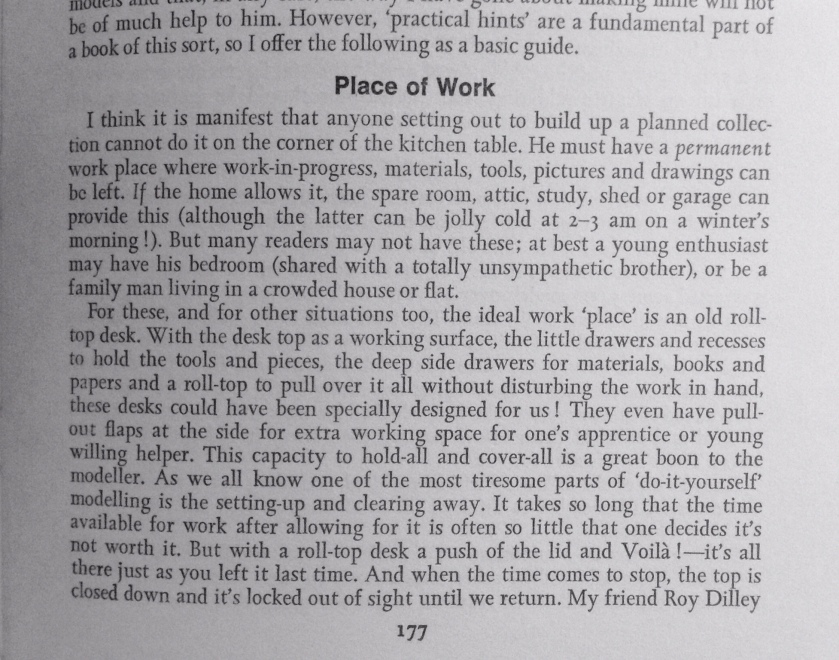 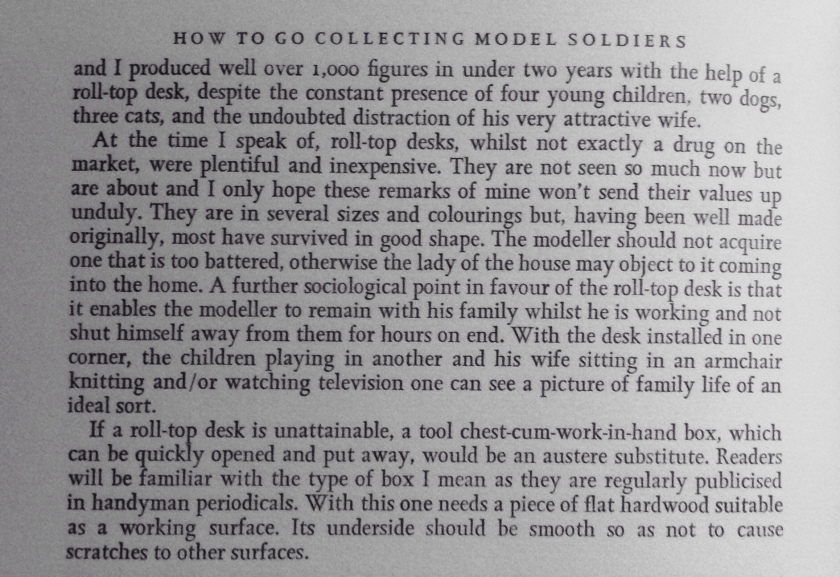 Some illustrators I know use roll top desks for much the same tidy domestic reasons.

Henry Harris’ useful little book also has a 6 page chapter on Wargames by Donald Featherstone including a short rules section, reprinted here and those in Featherstone’s own Book Tackle Model Soldiers This Way (Stanley Paul, 1963) : 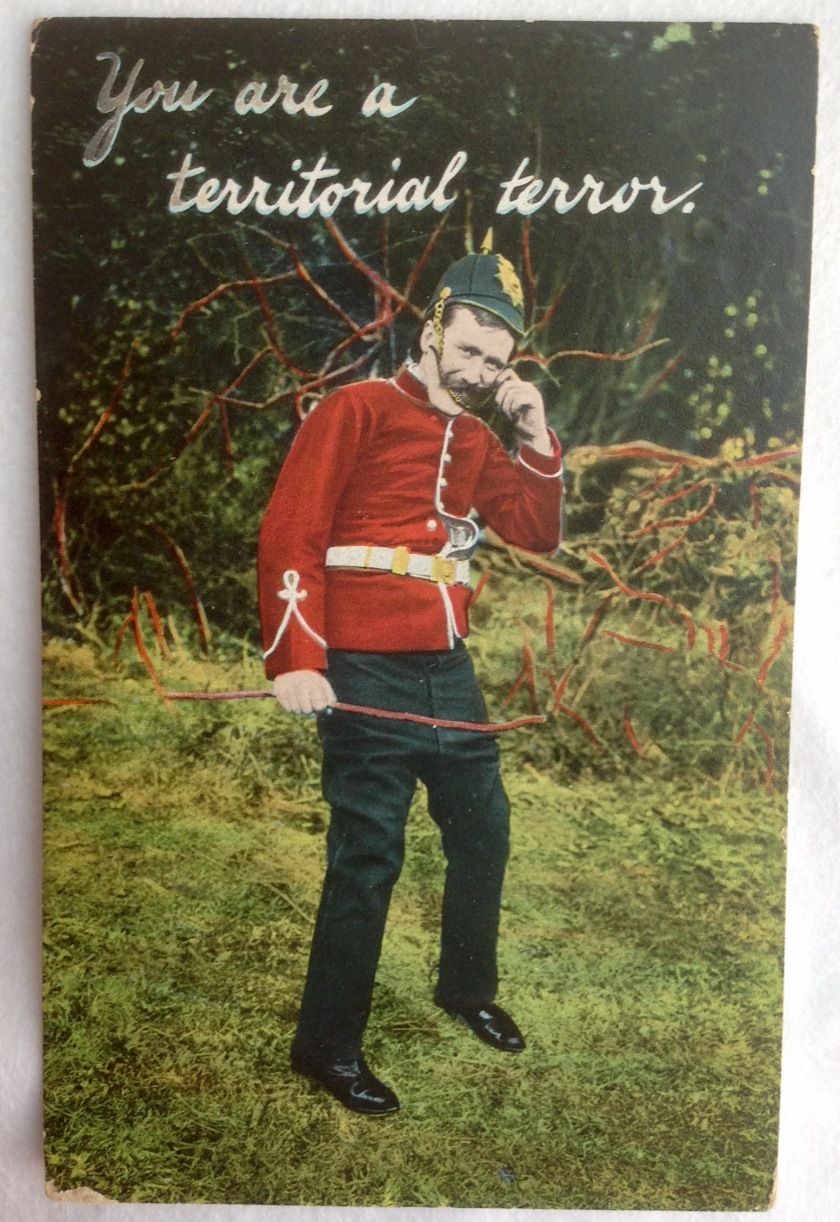 A comic postcard from 1911 with an interesting WW1 story on the back.

Crossposted from my occasional blog Sidetracked

Man of Tin blog
Create a free website or blog at WordPress.com.