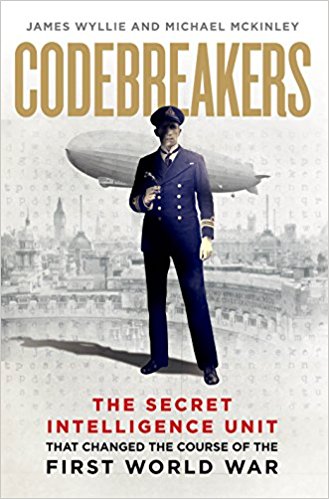 My World Book Day choice is a book called Codebreakers, a  highly readable book on Room 40 and WW1 Codebreaking by James Willie and Michael McKinley (published by Ebury, 2015).

Codebreakers is a very interesting book on WW1, picked up in my local branch library (childhood habits die hard!) but certainly worth buying in paperback.

It covers naval and submarine warfare, Zeppelin raids, the Western Front and Ireland. It also features German espionage and sabotage in America and the legacy of WW1 codebreaking, after the interwar lapse, with  the transition to WW2 codebreaking and breaking the Enigma codes at Bletchley Park.

Some remarkable characters are involved like Blinker Hall and larger than life authors who wrote in fictional form about their wartime espionage exploits such as  A.E.W. Mason, author of The Four Feathers https://en.m.wikipedia.org/wiki/A._E._W._Mason

I should imagine there are probably lots of gaming scenarios in this book for different people, although building spies and  (lack of ) Signals Intelligence  into games can be a challenge.

The book covers less familiar areas such as the Middle East and after the Russian Revolution. An interesting passage on Lawrence of Arabia, desert codes, telegraph wires and railways on page 249 in Codebreakers is  featured here on my occasional railway and gaming related Sidetracked blog.

It looks like there are several other similar titles out there on WW1 code breaking too, well worth buying or ordering through the library.

So that is my World Book Day Choice for 2018 – what are other gamers and other  people reading?