I have acquired second-hand a few dozen of these attractive 19th Century infantry from Peter Laing’s 15mm range, now commercially unavailable as the moulds have vanished.

With the tall shakos or tall kepis with the ball crests and long frock coats, they look mid 19th Century Crimean to Austrian  / Franco Prussian Wars. I think they are probably supposed to be French or Sardinian infantry, but they also look like French Foreign Legion 1850s.

With almost Napoleonic shakos, they would do well as Imagi-Nation troops for the Bronte juvenile fiction of Angria, Gondal and Gaaldine. I have enough spare standard bearers for alternative flags and nationalities.

I would be interested to hear from other Peter Laing collectors if they have or recognise these figures as mid 19th Century French.

Some other figure suppliers have similar tall shako / kepis. 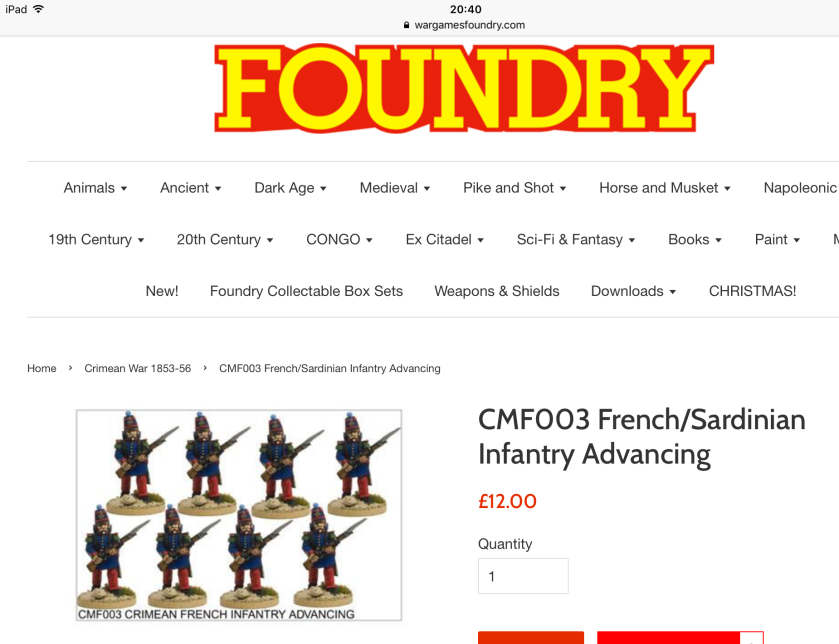 Interesting post about Franco Prussian War French Infantry (in French) that reminds us that the 150th anniversary is only 2 years away (1870 / 2020). This will no doubt generate more gaming and historical interest in the FPW. The Austro-Prussian War anniversary was I suspect slightly overshadowed by the 1916 WW1 anniversary events.

Crossposted from my occasional Sidetracked blog by Mark, Man of TIN blog, 17 April 2018.

Lots of information here on some unfamiliar aspects of WW1 from Africa to China, the Balkans, Gallipoli, Salonica and across the Middle East. Fascinating stories here. A WW1 Centenary website to watch for an alternative to the more familiar coverage of the Western Front.

The contribution of Portuguese troops during the Spring Offensive, Operation Georgette and the Battle of The Lys of March and April 1918 was commemorated by the French and Portuguese Governments today at the Portuguese War Memorial on the Western Front.

April 9th 1918 / 2018 is obviously an important day in Portuguese army history, as set out in The Portugal in WW1 Wikipedia entry: https://en.m.wikipedia.org/wiki/Portugal_during_World_War_I

April 9 1918: The Battle of La Lys, as it becomes known in Portugal, or Operation Georgette or the Battle of Estaires to the British, starts with a heavy artillery barrage from the Germans, followed by a German offensive with intensive use of lethal gas. The German Sixth Army deploys eight divisions (about 100,000 men), supported by intensive artillery fire. Against the force, the Portuguese have 20,000 soldiers and 88 guns. As a result, the Second Division is annihilated during the battle. The Portuguese CEP loses 327 officers and 7,098 soldiers, about 35% of its effective fighting capacity. The survivors are sent to the rear, some of the units being integrated into the British Army later on.

During this battle, one of the most courageous acts in Portuguese military history is perpetrated, as private Aníbal Milhais (also known as “Soldado Milhões” [“A Soldier as good as a million others” in his commanding officer’s words]) defends the retreating allied forces with nothing but his machine gun, allowing them to fall back and regroup. Once he runs out of bullets, he escapes the battlefield.

After defeating two German regiments and forcing the remaining German forces to go around him (they find it impossible to defeat what they believe to be an heavily armed post), he gets lost along the way, having to eat nothing but the sweet almonds his family had sent him from Portugal for three days. Lost and exhausted, he is able to rescue a Scottish major from drowning in a swamp. The major leads him to the Allied camp and tells of Milhais’s deeds.   (Infomation source: Wikipedia)

More about the Portuguese Expeditionary Forces in WW1

Plans for a memorial in England were recently suggested here  http://www.centenarynews.com/article/memorials-for-a-king–country-plans-for-tribute-in-uk-to-portugals-fallen

The Portuguese Fireplace is an unusual Memorial of Canadian and Portuguese troops on forestry duty in the New Forest.  https://en.m.wikipedia.org/wiki/Portuguese_Fireplace

There is a small amount of information about the Portuguese Army in Britain and Western Front in WW1 on the Imperial War Museum website.

I knew that the Portuguese Army of WW1 fought in French sky blue coloured  British Army cut uniforms with unusual fluted steel helmets from a comment on  some sky blue painted Airfix WW1 British figures I had posted online in 2016.

I couldn’t remember where I had seen coloured illustrations of such troops, it wasn’t in my usual reference of  Preben Kannik’s Military Uniforms of the World in Colour. Instead I found a page on Portugal 1917-18 in Andrew Mollo’s Army Uniforms of World War 1. 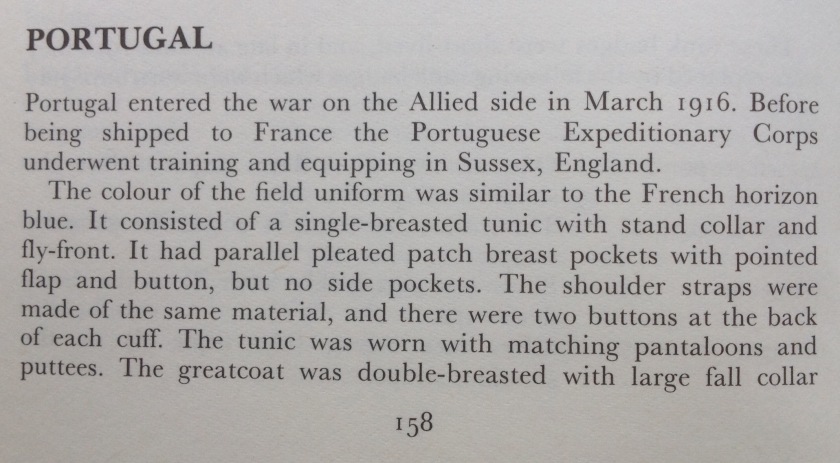 Modellers and gamers should be able to adapt WW1 British Army figures with steel helmets or soft caps into suitable Portuguese troops.

An interesting bit of WW1 history that I knew little about.

Amongst one lot was a small group of about a dozen WW1 Russian Infantry figures with rolled greatcoats F759 and officer F760  but  all painted brown with unusual black and white cross-gartered boots.

A quick check in Military Uniforms of The World in Colour suggests that the original owner painted them as WW1 Bulgarian Infantry. They needed basing and some of the paint touching up, whilst about half of them have no fixed bayonets.

An unusual choice of figure. I had to go and look up which side the Bulgarians fought for in WW1  – with Germany and the Central Powers from 1915  – and against whom.  After a period of early neutrality, courted by both sides, they joined the Central Powers and fought initially against the Serbs, then against other Allied troops including the British on the stalemate of the Macedonian / Salonika Front.

“The Kingdom of Bulgaria participated in World War I on the side of the Central Powers from 14 October 1915, when the country declared war on Serbia, until 30 September 1918, when the Armistice of Thessalonica came into effect.” (Wikipedia)

The unusual leggings are called Opankers and a dull brown woollen uniform was already in use amongst other ranks.

During basing and flocking, I managed not to obscure the well painted opanker leggings too much.

So these Bulgarians were  part of the army that invaded and pushed back the Serbian army, whose soldiers  that Marvin at the Suburban Militarism blog has been  beautifully  painting recently, albeit in slightly larger 1:72 plastic figures.

Alongside the painted Peter Laing Bulgarians were some unpainted original figures of  Russian infantry and others in peaked caps that may be British, Russian or other figures.

With Peter Laing  figures details being so slight at 15mm size, there are a range of similar looking figures in similar helmets or soft and peaked  hats which are almost interchangeable with some suitable painting.

A suitbale painting guide for these figures as Russian WW1 infantry can also be found in the same uniform guide.

Amongst some of the other mixed figures were these artillerymen, one type medieval and the other Russian fur hatted artillery men.

With so few of these Russian figures it is difficult to know whether to paint the remaining nineteen unpainted infantry as Russians.

Alternatively I could paint most of them as Bulgarians  to make a small Bulgarian skirmish force of about thirty to thirty five figures to fight my British pith-helmeted infantry in a Macedonia or Balkan scenario, aided by the WWI Turkish infantry that I have.  The two uniforms are pretty close anyway to paint and use interchangeably with a bit of gamer’s licence. I may keep one figure back to use as a future mould original and one to paint as a Russian figure.