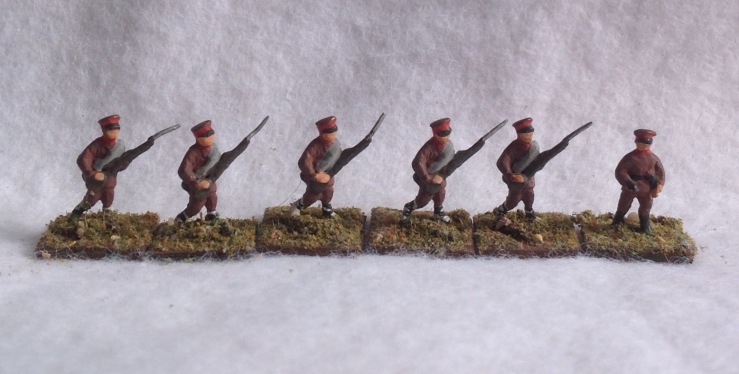 Amongst one lot was a small group of about a dozen WW1 Russian Infantry figures with rolled greatcoats F759 and officer F760  but  all painted brown with unusual black and white cross-gartered boots.

A quick check in Military Uniforms of The World in Colour suggests that the original owner painted them as WW1 Bulgarian Infantry. They needed basing and some of the paint touching up, whilst about half of them have no fixed bayonets.

An unusual choice of figure. I had to go and look up which side the Bulgarians fought for in WW1  – with Germany and the Central Powers from 1915  – and against whom.  After a period of early neutrality, courted by both sides, they joined the Central Powers and fought initially against the Serbs, then against other Allied troops including the British on the stalemate of the Macedonian / Salonika Front.

“The Kingdom of Bulgaria participated in World War I on the side of the Central Powers from 14 October 1915, when the country declared war on Serbia, until 30 September 1918, when the Armistice of Thessalonica came into effect.” (Wikipedia)

The unusual leggings are called Opankers and a dull brown woollen uniform was already in use amongst other ranks.

During basing and flocking, I managed not to obscure the well painted opanker leggings too much.

So these Bulgarians were  part of the army that invaded and pushed back the Serbian army, whose soldiers  that Marvin at the Suburban Militarism blog has been  beautifully  painting recently, albeit in slightly larger 1:72 plastic figures.

Alongside the painted Peter Laing Bulgarians were some unpainted original figures of  Russian infantry and others in peaked caps that may be British, Russian or other figures.

With Peter Laing  figures details being so slight at 15mm size, there are a range of similar looking figures in similar helmets or soft and peaked  hats which are almost interchangeable with some suitable painting.

A suitbale painting guide for these figures as Russian WW1 infantry can also be found in the same uniform guide.

Amongst some of the other mixed figures were these artillerymen, one type medieval and the other Russian fur hatted artillery men.

With so few of these Russian figures it is difficult to know whether to paint the remaining nineteen unpainted infantry as Russians.

Alternatively I could paint most of them as Bulgarians  to make a small Bulgarian skirmish force of about thirty to thirty five figures to fight my British pith-helmeted infantry in a Macedonia or Balkan scenario, aided by the WWI Turkish infantry that I have.  The two uniforms are pretty close anyway to paint and use interchangeably with a bit of gamer’s licence. I may keep one figure back to use as a future mould original and one to paint as a Russian figure.