A week or two ago I shared photos of how my inexpensive purchase of a metal detectorist’s finds of battered old toy soldiers were cleaning and shaping up. https://poundstoreplasticwarriors.wordpress.com/2018/05/07/more-dumb-soldiers-in-the-garden-the-clean-up-operation-begins/

Alongside repairing some other Broken Britain’s figures, I have been painting and restoring these wrecked figures to gaming and playable condition  or fighting fitness.

The aim is to give them the kind of glossy toy soldier factory painting bench finish that they might once have enjoyed.

Two bashed sailor bodies required a lot of restoration, although some of their original  blue paint remained. These Britain’s sailors were once proud part of either the prewar Royal Navy Reserve set 151 or the second grade paint set Royal Navy Bluejackets Set 49N, an attractive simple fixed arm figure like one I have in my collection.

Legs were repaired or restored  with matchstick and cocktail sticks,  wrapped round and round with masking tape, then sealed with paint.

The sailor figures  had no base and feet remaining. Fimo bases were made, fired and  painted to match my other Britain’s figures which are mounted on 2p pieces.

A 1mm hole was drilled through the shoulder where the rifle is broken off to insert some 1mm metal to rebuild a barrel. This was thickened to rifle size again by winding a small width of masking tape around it.

Two sailor’s heads with different hats were found in my bits box,  both recasts from Dorset Soldiers, and the neck  and sailor scarf area built up on each one to take these heads.

These figure repairs need to be stout and strong as they will once again be in tabletop  action or campaigning in the garden, H.G. Wells’ Little Wars style, albeit without firing real projectiles at them.

I do not use Milliput due to a family allergy,  instead I use the masking tape, matchstick and Fimo (polymer clay) method of repair. I also do not yet know how to solder such small figures.

The pink or red cheek dot on the faces is a useful gloss paint toy soldier style trick. Nothing very Military Modelling or realistic about this type of face. 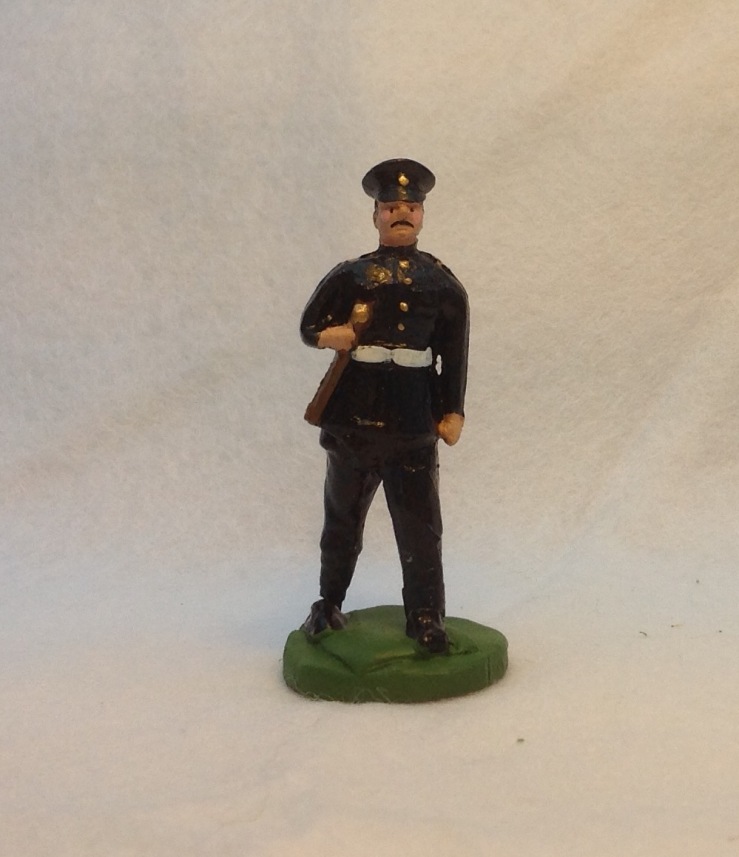 I worked on the swagger stick torso figure and made this figure out of him, using a peaked cap Prince August 54mm Toy Soldier head that I had previously cast in one of their traditional toy soldier moulds.

He got one of the disembodied pair of legs with puttees, along with a separate wooden leg. This (Crescent Models?) figure’s  body is curiously rather short in the arms!

These Guardsmen needed both leg and rifle repairs.

Two of the broken figures were clearly Britain’s Guardsmen marching and firing.

After preparing new legs as required, replacement bases were made from Fimo (polymer clay). Metal replacement bases can be bought for some footless damaged Britain’s figures from companies such as Dorset Soldiers.  As these are being repaired back to gaming or  fighting condition, rather than restored to red box display condition, I thought Fimo and tuppeny mounted bases like my other restorations were suitable, as well as cheaper and to hand.

Until some suitable recast Guardsman heads arrive, I am showing these figures with a spare loose fusilier or guards busby head.

As these old soldiers are special, restored to life and recalled to the colours, I have given several of them suitable status with various stripes as Corporals and Sergeants / NCOs.

My favourite figure of this bunch so far is one of the most wrecked figures whom, with the addition of a Dorset recast bare head and moustache, I have made into a brave bare-headed Battling Sergeant.

This bareheaded “on guard” pose reminds me of Victorian Battle paintings.  I have painted this brave fellow with the yellow facings (colour and cuffs) of the Buffs (East Kent Regiment), one of the popular Britain’s Toy Soldier Line Infantry Regiments. 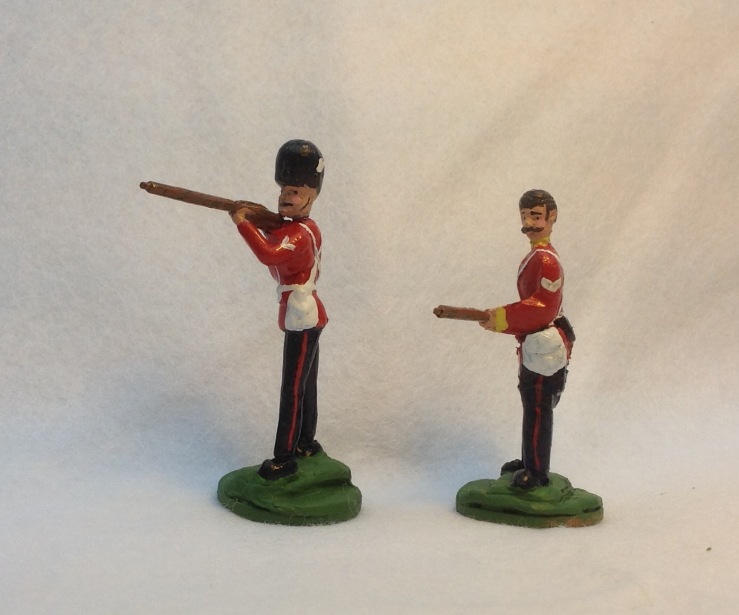 This Sergeant  matches two of the Buffs “on guard” figures amongst the Broken Britains figures recently given to me by John Forman, whose broken rifles I  have repaired.

Compared to what he was a few weeks ago, he’s looking quite handsome! I like the fact that his painted red coat is still showing even after years in the soil and now sits within his new red gloss Acrylic painted tunic.

Next task – watch this space

Amongst the next figure challenges from amongst the metal detectorist’s finds are these fine kilted colonial Highlanders by Britain’s and John Hill Co. (Johillco).

I would love to know their previous history, past battles and how these battered toy soldier figures ended up in the earth to be found by metal detectorists decades later.

Great fun, I am really enjoying this quiet, slow and colourful restoration work.