I had identified some slender leggy toy soldiers as short-lived WTC Wellington Toy Company figures amongst a batch of old lead figures that Alan was paint stripping.

I mentioned to Alan that I was working on some paint conversions of my few examples of these Wellington Toy Company figures into female troops.

Very kindly Alan sent me from Tradgardland these two extra paintstripped WTC figures to join my female rifle squad, along with two useful but battered GI mine detectorists by Charbens. Thanks Alan! 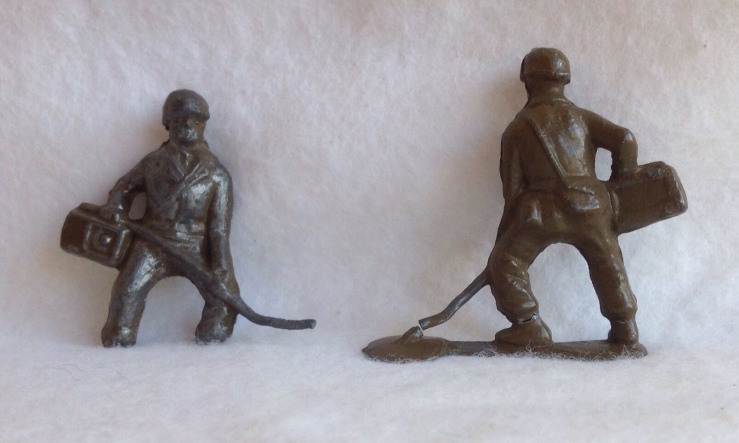 The footless one of the two Charbens GIs mine detectorists may well end up as aircraft ground crew as he looks like he is refuelling or oiling something.

In mixed batches of figures over several years I have picked up the odd leggy WTC figure, along with a cache of 6 dark green Rifle Brigade type Regiment ones from the 1920s/30s amongst some French Rivolet guns and gilt cavalry from a Miss Sanderson, selling her father’s boyhood collection to find it a safe home.

Not much is written about WTC figures but in my two most used reference books by Norman Joplin and Andrew Rose, both reference books very much worth the money, I found these few photographs.

The three types of WTC figures I have so far out of the Twelves known WTC are Rifle Brigade / Cameronians, Redcoat line infantry and Bluecoat Line Infantry … 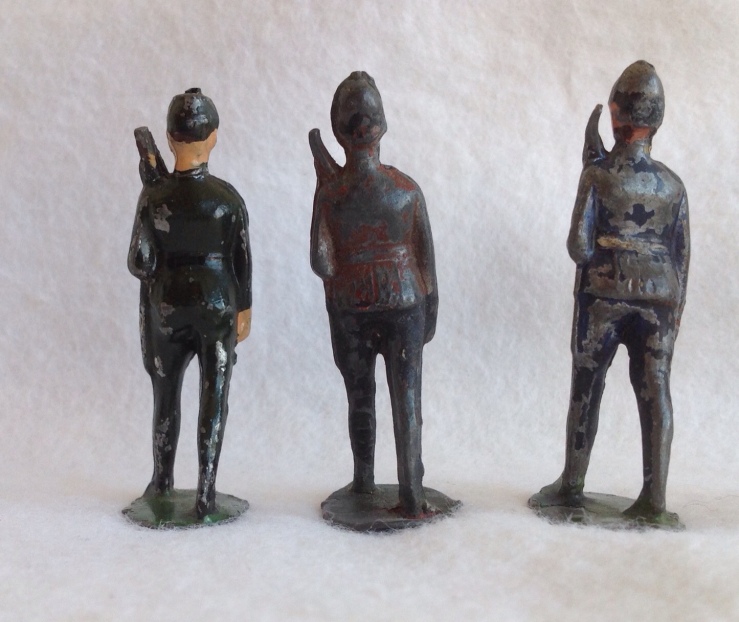 They can be identified through their slender build, along with WTC marked on the untidy circular / oval base.

Andrew Rose suggests, when discussing Unity Toys and O.H. and Co (Oliver Harper) range of guns, that these WTC figures are also found as the Unity Series of Metal Soldiers Manufactured in London as a cheap range of target figures made for them by WTC. Cheap, they may have been to some, but they would have been to some small boy a great colourful delight.

Base marked WTC, seen here on one of the few legible bases in my collection. 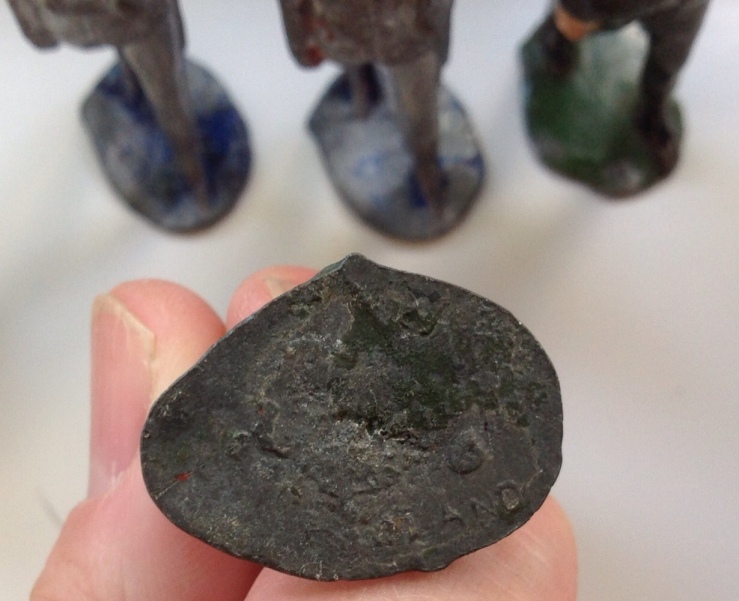 The untidy semi circular puddle bases are marked WTC for Wellington Toy Company and a number, possibly 724. Other markings suggest Made in England Copyright.

The Duchess of Wellington’s Own?

I think these WTC soldiers are quite attractive figures, slender and surprisingly shapely fore and aft. They remind me of Suburban Militarism’s series of posts about female soldiers illustrated on postcards and prints including the comic Ellam series of haughty female Household Cavalry. As if women could be soldiers, the postcards joke!

Looking back through Marvin’s posts on Suburban Militarism, this female squad in their strange kept caps could have made a fine set of Flora Sandes type Serbian soldiers.

Blogposted by Mark, Man of TIN, 1st August(a) 2018 – the 1st Augustas sounds like a Lady Regiment too, albeit more European or Roman. Is it #FEMbruary already again?

Unfortunately as with Prince August homecasts, the WTC noses are not always very distinctive until the moulds warm up or the metal just right. Such heads should usually go back in the melting pot. On cheap target figures, with simple quick factory paint jobs and little  quality control, who would notice?

This does not make for the most attractive haughty ladies.  So as well as the toy soldier pink cheek spot highlight, which maybe should have been a little redder,  I have done the same pink paint highlight for a nose on some of the five figures so far.  Leading to a variation on the old music hall joke,

My Lady Soldiers have got no noses.

How do they smell?