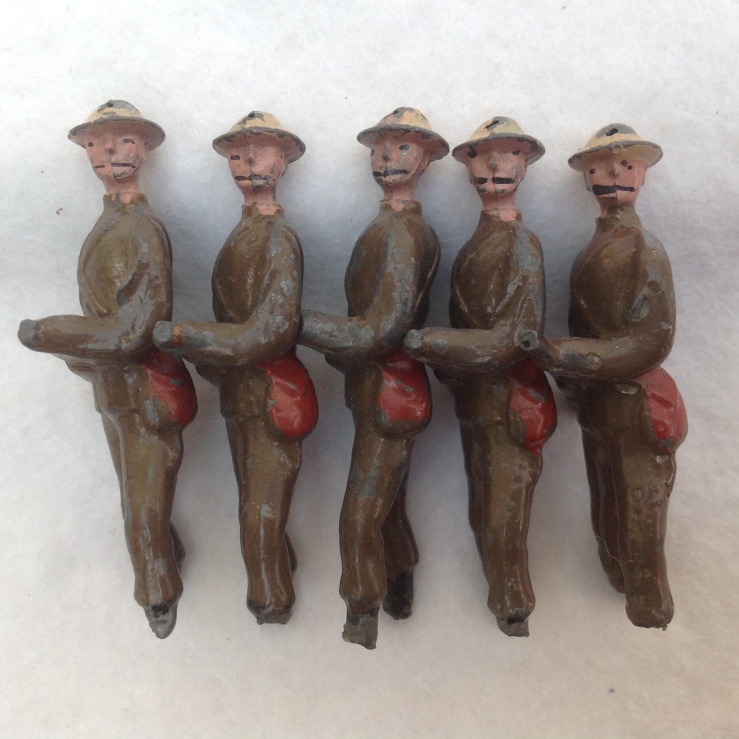 “Meet the gang, for the boys are here, the boys to entertain you …”

That was the  familiar opening to the 70s WW2 Jungle sitcom by David Croft and Jimmy Perry,  It Ain’t Half Hot Mum, stalwart of my childhood along with their other sitcoms such as Dad’s Army.

This group of Broken Britain’s have the look of  a dodgy ENSA show or music hall chorus line, cheap comics in a strange troops revue.

Seen from another angle, they are more Broken Britain’s – East Kent Regiment in Khaki on guard –  from a donation by John Forman, all broken  figures that would otherwise probably be scrapped.

There were seven types of Broken Britain’s infantry in the group kindly donated by John Forman, variously missing feet and bases and all missing rifles.

1. Britain’s Guardsmen firing – six classic figures with broken rifles – not sure which Guards Regiment, as they were play-bashed enough to have no obvious plume colours. 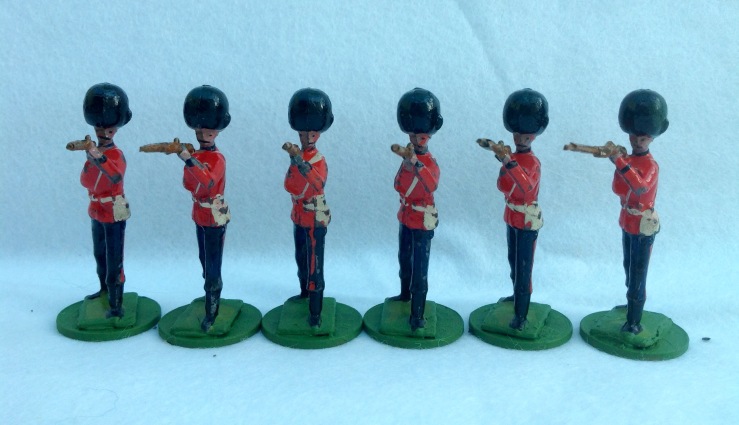 5. Britain’s  East Kent Regiment on Guard, service dress set 326a produced postwar in Steel Helmets (my “boys to entertain you”, above) – 5 figures.

7. The 3 charging Highlanders seen in a previous blog post

They have rifles missing as well as feet or base missing, so replacement bases are required, easily made from Fimo polymer clay to suit tuppeny 2p coin bases.

The rifle repairs are more fiddly, requiring drilling a hole with a 1mm pin vice or hand drill into the broken section. If this is a stubby section of broken rifle this is quite tricky, whereas it is much easier to drill into the hand section where it grips the rifle, which has a greater thickness of lead.

So finally  how did the ENSA “boys to entertain you” turn out in the end? 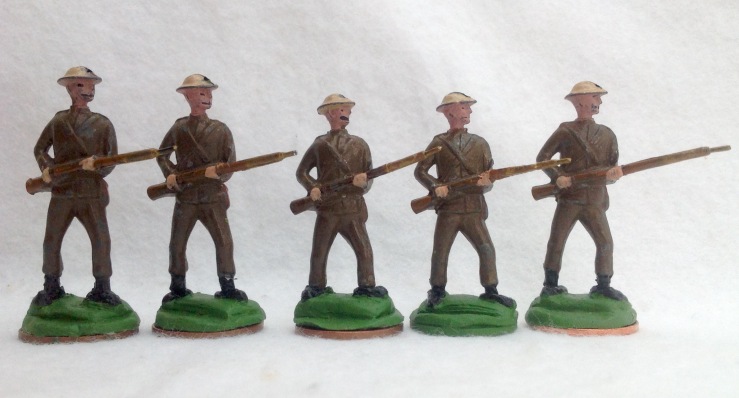 And for a suitable ear worm … the theme song to It Ain’t Half Hot Mum. Whilst the services / Seventies humour might have dated and the Indian characters would be handled differently today, as a child and still today, to me Windsor Davies is every bit the archetypal comic Sergeant Major to his “Lovely Boys”.