I have never quite recovered from watching this wonderful surreal weirdness by the Two Ronnies as a boy in 1980. Partly I remember this because one of the props was my much loved Star Wars laser rifle sprayed silver … In the year 2012, England is ruled by women, who wear the trousers. The controller of all is Diana Dors.

Men have been forced into frocks and the 1970s idea of women’s roles of housework, hairdressing and cleaning. Ronnies Barker and Corbett or ‘Betty’ and ‘Janet’ as they are known plan to escape the very punk leather clad or PVC 1970s State Police.

The head of the State Police

The cap badge of the security forces.

The role reversals must have been great fun for the Costume Department. 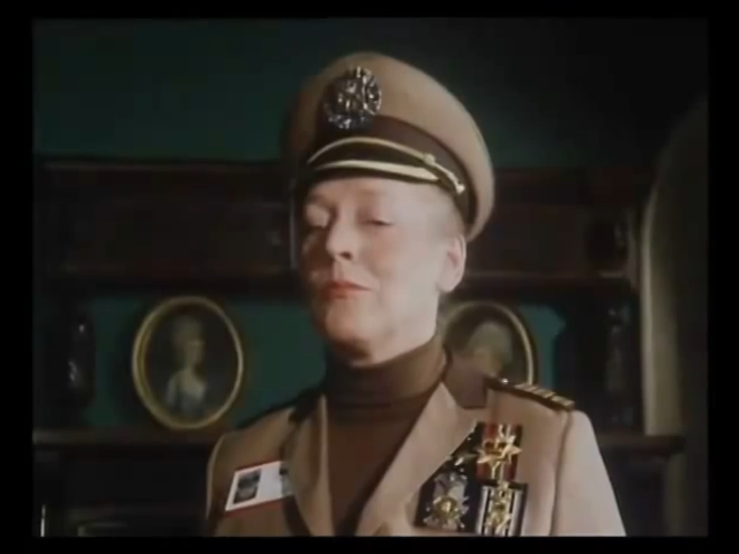 Watching this 1980 series  again this year,  almost 40 years later,  it has lost none of its strangeness!

Some of the humour and jokes however may have dated. Its feminist credentials are possibly challenged by the occasional joke about effeminate men and any excuses for lingering camera views of the state police in hot pants.

The Worm That Turned  – Here is a 1970s VBCW (Very British Civil War) type scenario to beat all others … and a great source of Imagi-Nations uniform ideas.

Worth watching again, even if it’s for a glimpse of the shops, high streets and supermarkets of late 1970s Britain, also seen in these behind the scenes shots posted by the Two Ronnies Appreciation Society.