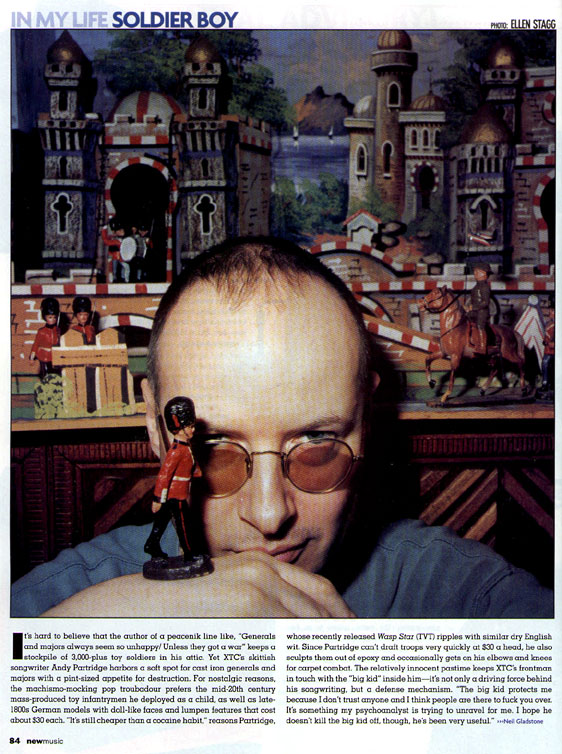 It’s hard to believe that the author of a peacenik line like, “Generals and majors always seems so unhappy/Unless they got a war” keeps a stockpile of 3,000-plus toy soldiers in his attic. Yet XTC’s skittish songwriter Andy Partridge harbors a soft spot for cast iron generals and majors with a pint-sized appetite for destruction.

For nostalgic reasons, the machismo-mocking pop troubadour prefers the mid-20th century mass-produced toy infantrymen he deployed as a child, as well as late-1800’s German models with doll-like faces and lumpen features that cost about $30 each. “It’s still cheaper than a cocaine habit,” reasons Partridge, whose recently released Wasp Star (TVT) ripples with similar dry English wit. Since Partridge can’t draft troops very quickly at $30 a head, he also sculpts them out of epoxy and occasionally gets on his elbows and knees for carpet combat. The relatively innocent pastime keeps XTC’s frontman in touch with the “big kid” inside him–it’s not only a driving force behind his songwriting, but a defense mechanism. “The big kid protects me because I don’t trust anyone and I think people are there to f*** you over. It’s something my psychoanalyst is trying to unravel for me. I hope he doesn’t kill the big kid off, though, he’s been very useful.”
— Neil Gladstone

Earlier in the year  by chance I heard a repeat of an interview with XTC punk band lyricist Andy Partridge who talked about his love of toy soldiers, partly because of a chaotic childhood where his mother kept giving his toys away.

Many musicians live in a world of their own, but Andy Partridge — singer/songwriter and guitarist for the Brit art-pop band XTC — has scaled his down to minuscule proportions. He collects toy soldiers. When not releasing Fuzzy Warbles albums and other musical miscellany on the Web (www.ape.uk.net), the 51-year-old Partridge is at home in Swindon, England, messing around with thousands of toy soldiers, many of which he’s hand-painted in uniforms of his own design. “It’s a world that’s not going to bite you,” he says.

His obsession began early. “Being an only child,” Partridge explains, “I needed to flex my brain as much as possible and disappear into the fantasy world that these little figures populated. Toys were immensely important for me. There weren’t always people around to play with and the weather wasn’t always great, being England, so you’d be stuck indoors. We weren’t a very rich family, so a lot of my toys for birthdays or Christmas were secondhand. But the one thing that I seemed to get brand-new from grannies and aunties would be toy soldiers. I was besotted with the world in miniature.”

Partridge also cites H. G. Wells, suggesting one way to avoid life-size conflict: “The leaders of the different countries are given as many toy soldiers as they want. Put them in a room with a set of rules and a few dice, and they can work it out that way.” — Rhonda Markowitz, Tracks Vol. 1 Issue 7 February/March 2005 SideTracks

“Yet for one so vehemently anti-violence, Partridge has a craftsman’s passion and skill for toy soldiers. He loves military history but only as it is encapsulated in the tiny, controllable world of the miniature battlefield. “I must be a tender little Napoleon, a benevolent Mussolini,” muses the man who describes himself as “very optimistic, repulsively so”. But it is the shabby, badly made, naive, folk-art toy soldier that truly engages him.”

It also appears that Andy Partridge designed these charming Irregular Miniatures ranges, some of which figures I hope will complement my 40-42mm Pound Store Plastic armies.

According to Japanese XTC fan site

PAINTING FACES by Andy Partridge
Here’s a couple of good rules that seem to work well. After you’ve painted the face you must add THE one toy soldier ingredient, cheeks. They are naked without them.

Virtually every maker filled in the ruddy blush of their little heroes,you must do the same. Mix up some red and white to make a pink that is tonally similar to the flesh but with no darkening, it will zing out more. Load the brush and wipe it in a patch on either side of the face.

If your soldier is a real Victorian man he will of course have a moustache, some thin black on a fine brush will do well, quickly {always!} apply across the face. If he is the fresh faced type,  dab a spot of red in a small blob where the mouth might be.

Don’t be tempted to add a mouth under a moustache, one or the other, never both please, it always looks wrong, Britains and others knew that.

Same rule applies for beards.Hair can be a swift wipe with black or a reddy mid brown across the back of the head but don’t bother with sideburns as they always look like you’ve over messed with the face.

You have a choice with eyes. Most makers painted one simple black dot each side,which oddly looks better the farther away they are from each other. Nearer in to the nose comes over rather cross eyed. It’s a matter of taste as to whether they’ll have eyebrows or not, the rule seemed to be the farther back or simple the headgear, the more the likelihood of brows. Britains tended not to paint them in except for Scotsmen and some sailors?? I always leave them out.
Don’t try to give them whites of the eyes. Again it looks too fussy and not classic. A few German makers did so on their larger scale figures but even then the soldiers still looked like stunned madmen. Shell shocked?

Unfortunately for its minstrel connotations, Africans were always given whites to their eyes, but it seems okay as the contrast makes them look more toyish.

Check the photos of the ‘native’ figures in the Deutsche Homage picture section of the Irregular Miniatures website.

I have used many of these painting tips from Andy Patridge over the last year, whilst repairing broken Britains, especially the one about rosy or pink cheek dots. It really does suggest the classic Toy Soldier style.

I reprinted these blog interviews as online web stuff has a habit of vanishing when you look for it again.