I am slowly trying to work out how to reproduce Boy Scout and Girl Scout Wide Games with miniature figures on the gaming table or in the garden.

In Britain since 1910, we have not had mainstream Girl Scouts,  after Guiding was set up to manage the enthusiastic adoption of Scouting for Boys by many Edwardian girls, sometimes originally in mixed troops.

However in some parts of the UK, across America and the world, Girl Scouts have survived in  both name and spirit.

The Girl Scouts of America kept their distinctive Scout name since their formation in 1912, led by Juliette Gordon Low. In this Very good history guide to the early Girl Scouts of Britain before they became Girl Guides, it mentions Cuckoo Patrol Girl Scout troops, the fears about mixed groups, suffragette activities and WW1 and the fact when Guides was set up in Britain  not all Girl Scouts  apparently transferred …

Following the publication of Scouting for Boys in January 1908 girls were actively engaging in Scouting, they had been just as inspired by the ideas in the book as their male counterparts. Troops and patrols of Girl Scouts were encouraged by Robert Baden-Powell;

“I think girls can get just as much healthy fun and as much value out of scouting as boys can. Some who have taken it up have proved themselves good souls in a very short time. As to pluck, women and girls can be just as brave as men and have over and over again proved it in times of danger. But for some reason it is not expected of them and consequentially it is seldom made part of their education, although it ought to be; for courage is not always born in people, but can generally be made by instruction.”

Robert Baden-Powell, The Scout, May 1908

One group of Girl Scouts, sadly only known to us as “Kangaroo Patrol” were so inspired by this quote that they copied it out at the beginning of their patrol magazine in May 1909.   Their magazine was full of adventure stories with Scouts preventing robberies and kidnappings, it also showed girls and boys Scouting together.

The British Boy Scouts and Girl Scouts movement (1909), sometimes known as Peace Scouts, ran in parallel for a time, absorbing Girl Scouts who did not want to transfer into Guiding in 1910.

Wonderfully the BBS and BGS troops still exist in small numbers in Britain and elsewhere proudly wearing the old fashioned uniform, open to boys and girls  and linked to the worldwide scouting movement.

Baden Powell was surprised but not antagonistic towards the enthusiatic uptake of Scouting for Boys by the kind of vigorous “intelligent sort of girl who likes boys’ games and books” as H.G. Wells observed in his preface to Little Wars  a few years later in 1913.

“As records show, at this time Baden-Powell was clearly supportive of Girl Scouts. In May 1908 he wrote to one Girl who enquired that she would be welcome to set up a Patrol of Girl Scouts, and in his regular column in ‘The Scout’ in January 1909 he stated of the girls that “some of them are really capable Scouts” …” 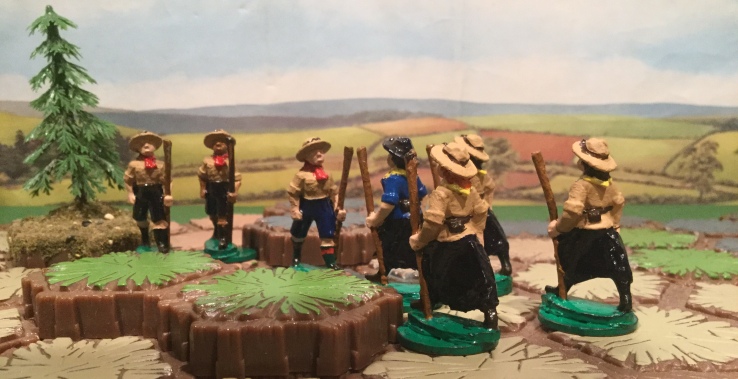 “ …In the 1909 edition of Scouting for Boys the uniform suggestions included recommending blue skirts for Girl Scouts. Large Scout Rallies were held, including one at Scotstoun near Glasgow, where Girl Scouts were both specifically invited, and warmly welcomed.” Source: Leslie’s guiding history website.

Useful painting or colour scheme tip : blue skirts rather than the Boy Scout blue shorts mentioned in the 1909 Scouting for Boys. Dark Blue went on to become the colour of early Guide uniforms.

“By late 1909 amongst the official Scout membership of 55,000 there were already over 6000 Girl Scouts officially registered, and more registering daily.” Leslie’s Guiding History.

By 1910, Guiding had been established to protect the reputation of these Edwardian girls and of the fledgeling Scout Movement. Scouting for Boys was adapted by Baden Powell and his  sister Agnes into a Guiding Manual, “How Girls Can Help Build The Empire”,  designed to equip girls with camping skills, homecraft and child care skills for adult life in Britain or upcountry in the Empire. 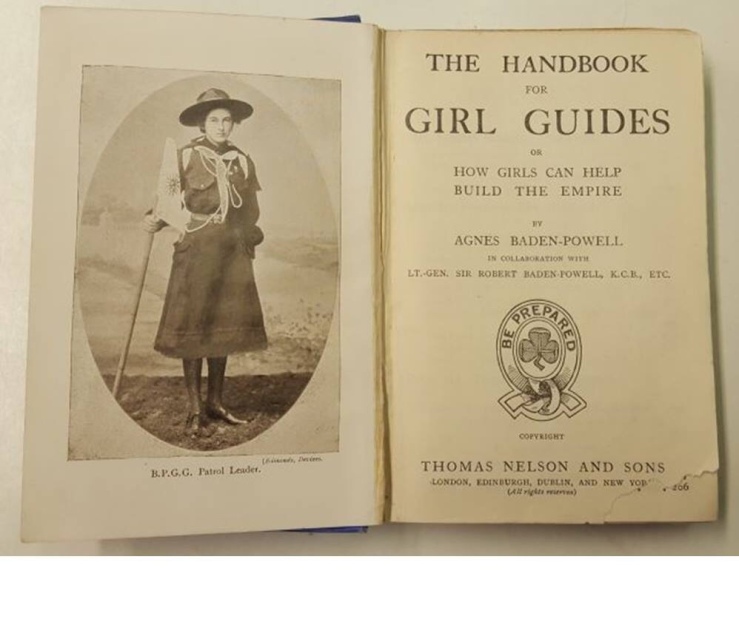 It would be almost 70 years before mixed older (Venture) Scout groups were established again in Britain.

Guiding and scouting being world movements, it is of course possible that fictional  Imagi-Nations like the Bronte family’s  Gondal and Gaaldine, or the many great Tintin-esque Imagi-Nations and Grand Duchys created by gamers could have their own Boy Scout and Girl Scout movements.

Girl Scouts of Gaaldine or Gondal?

Boy Scouts of Angria or Generica, anyone?

13 thoughts on “Wide Games and the early Girl Scouts?”