For a few months I have not done much gaming to write up.

Not since a short Mountie Skirmish in late November 2018 last year https://manoftinblog.wordpress.com/2018/11/30/mountie-ambush-game-15mm/

For a few months my gaming area and tabletop have been covered in broken Britain’s figures awaiting repair, Peter Laing 15mm figures awaiting paint, tools and useful bits of scrap for modelling.

I am as happy casting, repairing and painting figures as I am gaming with them, hence the quote on Man of TIN blog from Donald Featherstone:

The largest hex game board has hung on the wall being a former picture frame – a neat storage solution tucked away in the corner of a shared living room. 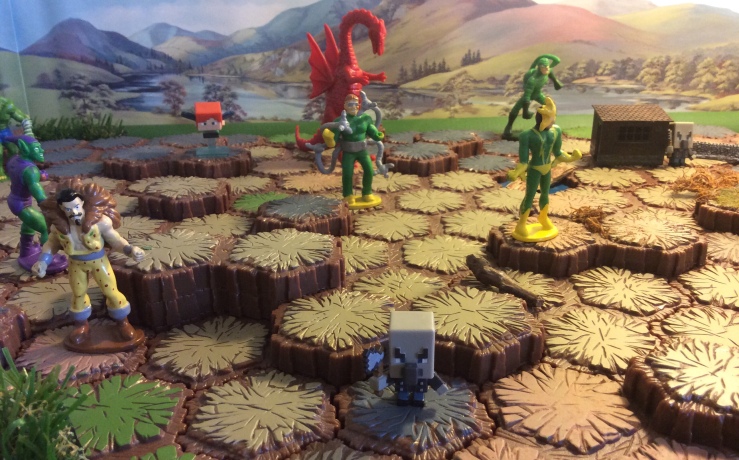 As part of the Scout Wide Games research and rules writing, I am not sure if my hex boards will be too small for the 42mm range Scout figures I have painted. Maybe I should have gone smaller, say OO/HO railway or my Pound Store figure conversions? Different size figures, different scale scenarios?

I have been playing around with scale from 54mm superheroes and tiny blocky Minecraft blind bag figures (Heroscape hexes have a 3D landscape Minecraft feel) down to 15mm Peter Laing figures, which give a bigger playing space.

Having a large enough landscape for the Wide Games scenarios is obviously harder with the larger Scout figures 42mm Shiny Toy Soldiers / Little Britons range (from Spencer Smith Miniatures), so the scale and ground space available may shape the scope of future scenarios.

My couple of quick paint conversions of Pound Store figures in a smaller scale may enlarge the territory available to my Scouting games – I can cheaply and quickly knock up a couple of patrols of these to try this out.

Part of the Wide Games appeal is that tabletop Wide Games could equally function as Garden games especially with the largest, simplest 60mm semi-flat Scouts – as pointed by Alan the Tradgardmastre of the Duchy Of Tradgardland Blog.

The rest of the space? 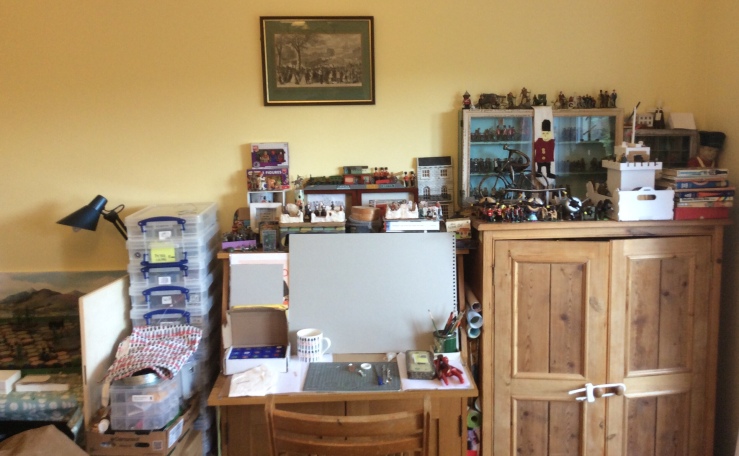 For the last few months, wriggling into the old crafting chair has felt like sliding into a narrow cockpit to focus down onto the hand tools, paintbrush and figures in front of me. It’s also meant that I had no gaming space. Shifting these about and restowing boxes has helped no end.

I understand more fully now the points about concentration and wellbeing made in the Models for Heroes videos. There is a mental craft zone that the world shrinks down to.

I am reminded of the ominous episode in Harry Pearson’s gaming memoir Achtung Schweinhund where Harry hears from his gaming best friend about an obsessive hoarder (stereotypically male, middle aged, single). This man’s decaying house is in danger of collapse from an Aladdin’s Cave of stored vintage unboxed figures, magazines and newspapers, yet eerily the paint table is immaculate and ordered. Harry and friend see a vision of their possible lonely futures.

The cutting board and painting space that forms my crafting area has now transferred to the right of the board onto a flap down modern bureau desk, rather than than the traditional modeller’s Roll Top type desk. It fits into the rest of the family without sitting in a room apart. It’s stuffed full of toy soldier things and research notes and books for other work-related projects, protected from paint splatters by a removable cardboard screen. Reorganising the contents means that everything should be able to fold back up out of sight.

The desk top “display” space itself could also do with a tidy up as it is currently piled with figures and books that I have worked on in the last year. Inspiration but it’s also a jumble of what has been inside my head recently.

Next to this sits a small bulging cupboard stuffed full with books, hollowcast figures and hoarded Airfix figures and kits from childhood onwards, again its top piled with this year’s projects. Again all of these could do with a sort through on another grey day.

More Really Useful storage boxes live in the garage for my metal casting kit, buildings, some other temperature proof gaming stuff and metal figures, whilst the indoor storage is reserved for the more vulnerable fragile vintage and childhood plastics figures and vehicles.

The painting above the desk is a recent acquisition, a framed Illustrated London News print of the Lancashire Rifle Volunteers parading at Knowsley Park. Britain’s Victorian Home Guard against another Napoleonic French invasion, and finely dressed at that. One for Marvin at Subterranean Militarism!

So there you are, restored –

an experimental games lab to try out Wide Games or gaming scenarios indoors,

an encouragement to paint and base those Peter Laings stuck in the lead limbo of the ‘work in progress’ painting box,

hopefully a little more presentable part of the Living Room if we have visitors to the house!