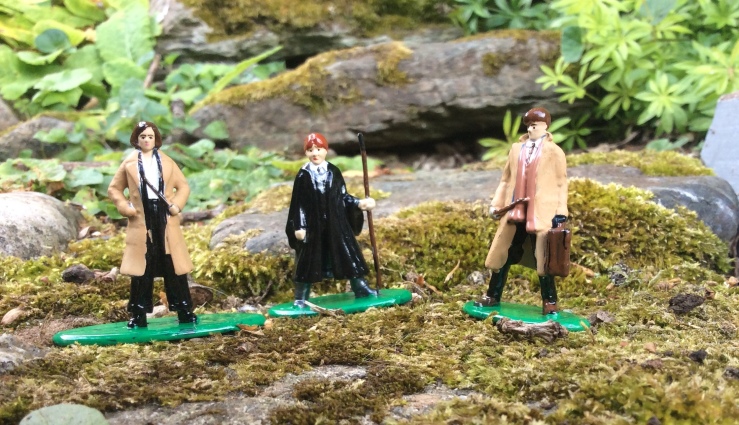 A quick trip into town on  dull family business was enlivened by popping into several charity shops (sadly no plastic tat, but a mass of obscure WW2 aircraft, mostly foreign 1/72 kits in one – resisted) and The Works.

The Works had a tiny selection of a few Nano Metal Figures, mostly Harry Potter / Fantastic Beasts and Halo SciFi, but at good prices – 2 for £3.00.

I had previously bought one of this Nano range last year (above),  who with his suitcase and suit worked well as a civilian or spy figure in different eras  for some 40 – 42mm figures I have https://poundstoreplasticwarriors.wordpress.com/2018/09/02/pound-store-42mm-spy/

As a result they should roughly fit with my 40mm figures to 42mm figures. They do slightly tower over my Pound Store Plastic Warriors penny dreadful conversions, which are roughly 32mm. There is only a slight size and build difference between the adults  and child / pupil figures  in the Harry Potter series.

The shiny colours are not a problem as I like old toy soldier Gloss paint styles.  It was the choice of colours that needed work on them to blend them in better as multipurpose civilians. Blue and silver trench coats were quickly repainted in dull khaki, a little more ordinary civilian or secret agent. A green Toy Soldier style base quickly altered the feel of the figures.

The original Nano figures can be seen here with their packaging, colours and a range of other figures for size comparison. I flagrantly ignored the instruction on the reverse “Caution: Heavy metal collectible figure  – not meant to be played with as action figure”

These figures are diecast metal. Whilst I found that I could drill a hole without difficulty through Ron Weasley’s hand to take a Scout stave, I could not easily clip or cut the generously sized bases any smaller.

I thought that ‘Ron’ might somehow make a useful Scout Wide Games figure, alongside the two civilians. With the “Cloak of Romance” mentioned in the 1930s Wide Games scouting scenarios book , Alan ‘Tradgardland’ Gruber  suggested that we could adopt or re-use any available figures that the Boy Scouts are imagining themselves into being – pirates, smugglers, natives,  cowboys, Indians, settlers etc.

As well as as cheaper books, The Works also has a craft section of paints and crafting materials, small wooden boxes etc. I found this set of Scrabble style thin wooden tiles designed for crafting and scrapbooking. With the sticky backing dot removed, they could make quick and easy figure bases for 15 mm figures. 4 pence each a base.  This would make an alternative to penny bases for 20 – 40mm figures or an alternative to cutting  out squares of scrap mounting board, which is how I usually mount my Peter Laings.

Alongside the 32mm pound store plastic figure conversions of space figures, the Halo female figure of ‘Cortana’ is slightly taller at 41mm. But in space and sci-fi, different  races and cyborgs etc will vary in size. Just watch Star  Wars cantina scenes.

The civilian, railway and military  ranges at at S&D Phoenix  1/43 https://www.sanddmodels.co.uk/products_43_figures.htm

Meanwhile back in the post Edwardian years before WW1 …

Travelling back to a different time and different world, I have finished reading through ‘How Girls can Help to Build Up The Empire – The Handbook for Girl Guides’, c. 1912, the second of  my original Scouting texts that I have read as part of the scouting Wide Games Project. The paperback reprint American adapatations or versions of both books are on order.

Whilst H.G. Wells was working on Floor  Games and Little Wars, Robert Baden Powell’s sister Agnes was busily adapting his bestselling Scouting for Boys for an eager new audience.

This book is a fascinating period piece, along with Baden Powell’s 1908 Scouting For Boys, with lots of useful details to include early BP Girl Scouts and then the BP Girl Guides in the scouting Wide Games tabletop simulations. However from 1912 the new BP Girl Guides were discouraged from or not officially allowed to ‘romp’ or train alongside the Boy Scouts.

No fraternisation? This might have to be ignored in many circumstances on my table top simulation / gaming version. I will have to trust them to behave. Scout’s or Guide’s “Honour” is an important concept to bring into the gaming set up. 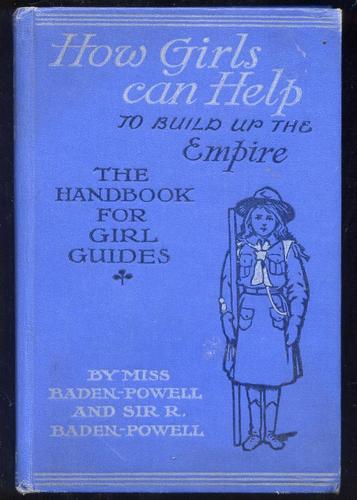 More on these fascinating books in future blog posts. The Phoenix 43 Scout Trek Cart group is almost finished too.

4 thoughts on “A Quick Trip to the Works”