Tomorrow / today the 18th November is the day of Stuart Asquith’s funeral.

I know that several of Stuarts’s long term gaming friends and magazine colleagues and contemporaries will attend.

I hope the many online tributes and the tribute games played this weekend in his memory will be of great comfort to his family.

Aerial view of the skirmish area set out as in the Solo Wargaming book. Turn 1

My tribute to Stuart, using some of his former 15mm Peter Laing troops, is a small Ancient skirmish.

“A lightly guarded convoy of wagons has run into a spot of bother. One of the wagons has suffered a broken wheel and had to be left behind with a guard by the rest of the convoy. On reaching their destination the scouts pass on their news about the disabled wagon. At once a relief column is organised, complete with spare wheel to put the wagon back in service and sets off.

Meanwhile the enemy is also interested in the immobile wagon and its small escort and decide to investigate. The wagon guard, on the alert for just such an event, open fire on the inquisitive enemy, hoping that relief is at hand.

This scenario is fought in three stages. Firstly the wagon guards attempt to keep their attackers at bay. Next reinforcements arrive and deploy to allow the wagon to be repaired. Finally the wagon and its new escort have to gain the safety of the eastern edge of the table once more. A moderately complex, three-part engagement follows and offers numerous permutations for the solo player …”

I am not normally an Ancients player but having picked up several years ago a 15mm Pict / Celtic and Roman army from Stuart Asquith and also other figures from online sellers, I have enough scraps of Egyptians, Greeks, Assyrians etc to field several different national skirmish forces. 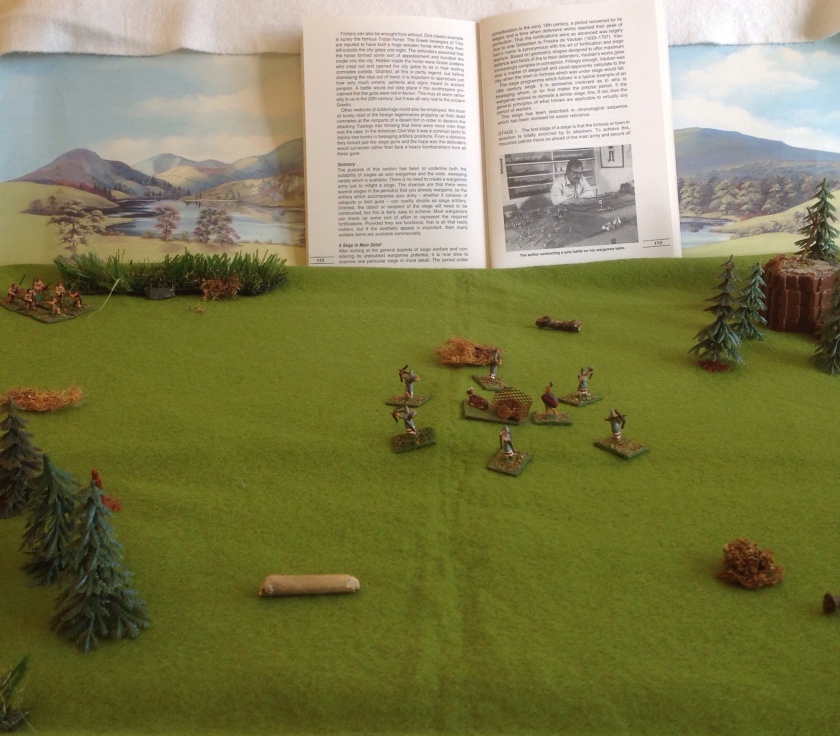 A Roman supply column has left behind a broken down wagon with a few escorts, promising to send a relief force.

A small shadowing hunting party of Pictish scouts lurk to the Northwest.

The broken wagon is a fire cart, a blacksmiths cart, belonging to the Roman Army.

Stuart recommends a small ‘Wagon Guard’ force for part one, such as 6 archers (or musketeers in later periods).

A d6 is thrown to find out when reinforcements on both sides will arrive. In this game they would appear on Turn 5, Romans to the East and Picts to the West.

There are several areas of uncrossable forest to the Southeast and Southwest and a passable rocky forest outcrop to the North East.

It takes two turns to fix the wagon once the Roman forces reach this waggon with the repair tools and a spare wheel. Repairs take the help of four men.

Turn 1 sees the Roman armoured archers spread out into a defensive circle, the Pictish scouting party spread out to the Northwest. The Roman archers land two successful hits at mid range and hit the two Pictish archers.

Without distance or range weapons, the Picts charge into melee – one Roman archer is killed and two more Pictish spearman.

In some melee situations, the +1 advantage of the armour of a Roman archers is cancelled out by being confronted by two Pictish spearmen +1.

Roman archers fought the melee with their swords, so are unable to fire this round.

With few Pict scouts left, we take a morale test to work out what the Picts will do. Roll d6 – 1,3, 5 continue for melee and 2,4,6 outnumbered, retreat. The Picts move into melee and being within firing range, the last Picts are quickly wiped out. 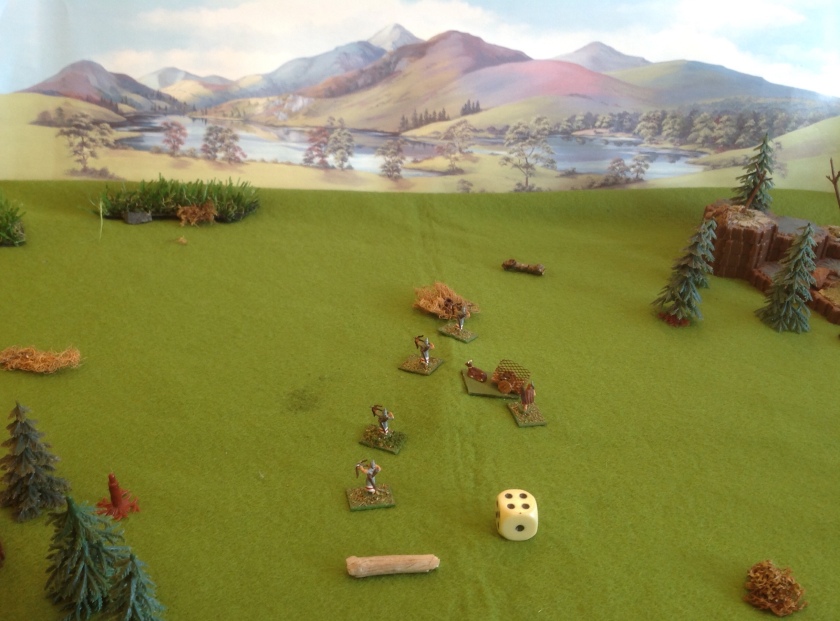 The Pictish War Band and Roman relief column arrived on the scene at opposite ends. The Light Cavalry and Light Infantry head out ahead of the others. Roman archers take out a Pictish light cavalryman and archer. The Pictish archers miss their targets.

The Roman light infantry and cavalry ride up with the mounted office of the relief column to join the Roman archer Wagon Guards who fall back behind the wagon to join them.

In the ensuing movement / melee and fire turns, 2 more Pictish archers are successfully targeted by the Roman archers but the Roman mounted officer is killed by a Pictish archer. 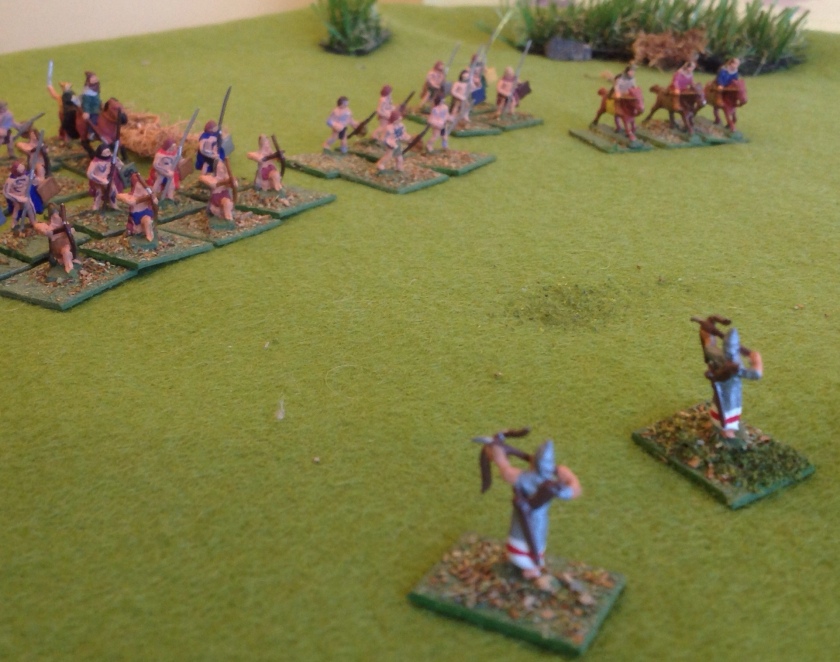 Romans move first and the legionaries in the relief column reach the stranded waggon – the light infantry and cavalry on both sides clash in melee. Two Roman cavalry and two auxiliaries are quickly killed.

At this stage the Picts have a series of lucky dice throws, spelling disaster for the Romans. They slam into the Roman ranks, killing the last 4 Roman archers of the Wagon Guard.

The Romans are unable to fire their pilum short spears as their own men are out in front. Fortunately the Pictish archers are equally blocked from firing by the presence of their own men.

In the melee the Roman Eagle standard bearer and another infantry officer is killed. However the Eagle is quickly grabbed by another legionary.

As soon as the Romans can throw their pilums, six Pictish warriors are brought down.

Rule – only the first two rows can throw pilums.

In turn 8 the two front Roman ranks who have thrown pilums spread out to counter the Picts to their right. 6 more legionaries are lost in melee before the remaining pilums are thrown taking out three more Pictish archers and spearmen.

As the Picts move into further melee, 2 more legionaries fall – the Eagle is again grabbed to safety by the Roman officer – and 4 Picts are killed. Only one of the Pictish archers is left.

On the Pictish side, only one archer, a spearman and the mounted Pictish officer and one of foot remain.

On the Roman side, 4 legionaries, the trumpeter and officer with the Eagle remain.

The Picts choose to retire, the Romans to fight on.

Phase 3 – The Wagon repaired and rescued

The Picts retreat and the Roman legionaries repair and recover the wagon, heading off to the East, wary of further Pictish attack. 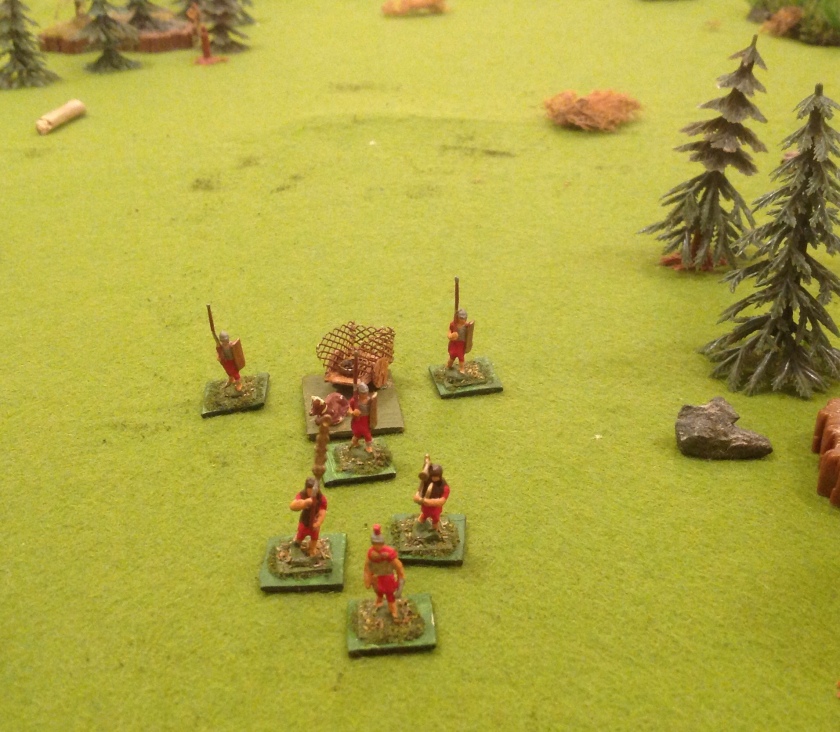 A beer tribute to Stuart Asquith who watched over the whole proceedings.

Once the game was over, I raised a glass of WW1 anniversary beer to Stuart in thanks for all he had done for my hobby.

Sadly my last bottle of this 2014 WW1 anniversary Cornish vintage beer picked up on my travels hadn’t aged well in the bottle. I had picked up a couple of beer mats for figure basing from the pub after Sunday lunch after an earlier walk – appropriately drinking some Tribute beer. 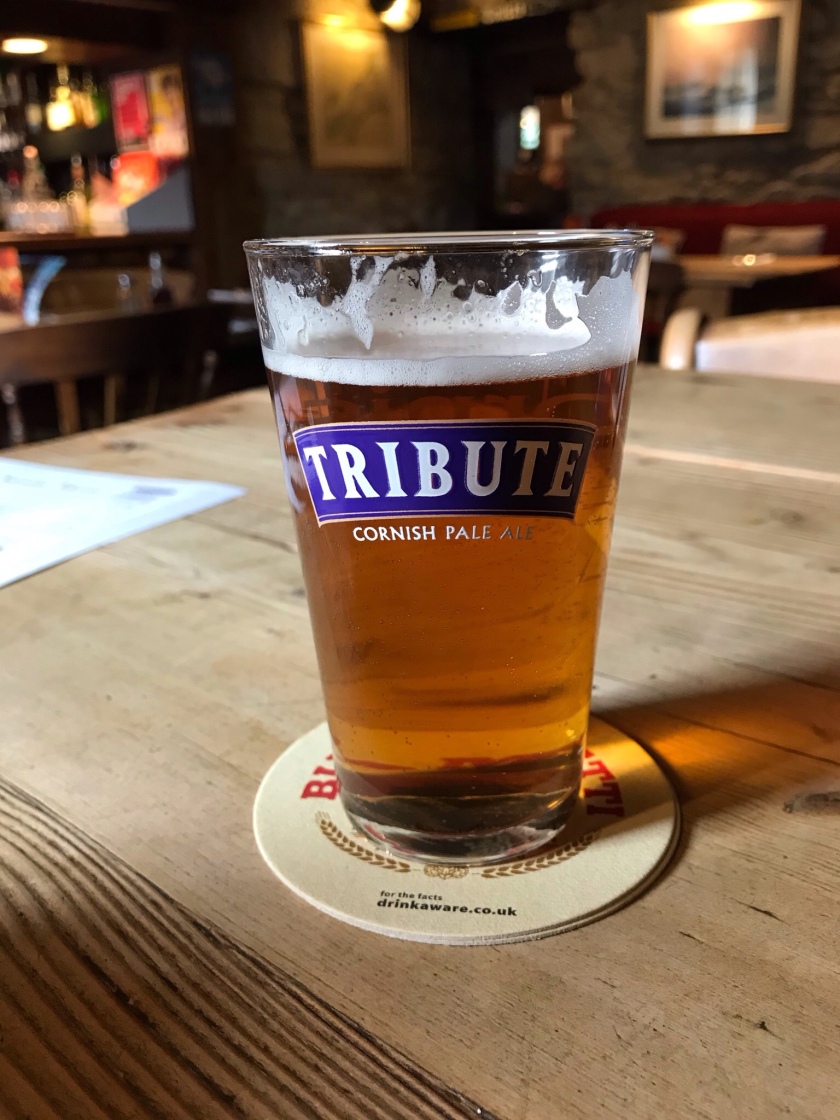 Rest In Peace, Stuart Asquith – hope you enjoyed the game.

I reduced the movement scales and weapons ranges down from Stuart’s simple rules for 15mm scale:

Spears (such as pilum) 4 inch range.

Individual melee, throw a d6 for each man involved, highest number wins. If there is two versus one man, add +1 for each attacker.

Mounted versus foot, +1 for mounted.

Fighting troops with shield or armour, -1 for attackers.

Unarmoured troops, -1 from their dice.