For a forthcoming gaming scenario in 2020 about the Battle of Saxby between navvies and country farmworkers in Leicestershire during 1844, I needed some suitable looking country figures for the mid 19th Century to match my Airfix OOHO trackworkers / navvies with their red neckerchiefs.

I raided all the spare civilian figures that I could find from hoarded boxes of Airfix Waggon Train, American Civil War Artillery and the odd Airfix civilian or airman.

I have used a Citadel Agramax Earthshade brown shade wash to make the figures’ clothes and faces suitably muddy for farm work, on campaign or on the trail.

These men with rifles might be too well armed for the Saxby Bridge battle of farm tools and navvy tools.

I painted them non-uniform and nondescript enough to work as American Civil War troops, Wild West cowboys, irregular troops or even Boer sharpshooters. The lamb or calf carried by one of the figure types can be underpainted to look like a bed roll or provisions sack.

Some of the Airfix Waggon Train civilians have no tools or weapons so I used a range of spare picks and shovels from the Airfix OOHO Forward Command Post or Jungle Outpost.

The Earl of Harborough’s men at Saxby Bridge fought off the Midland Railway navvies, who were trying to survey and build a railway across the Earl’s estate, with stout staves and every tool they had to hand.

The farm figures equipped with picks and shovels should work equally well for future modern railway games, as well as civilian workers, sappers, miners and engineers with a wide range of armies.

Some interesting figures of the American Civil War Artillery crew look as if they could be miners or farmworkers, whilst still being usable as gun crew. 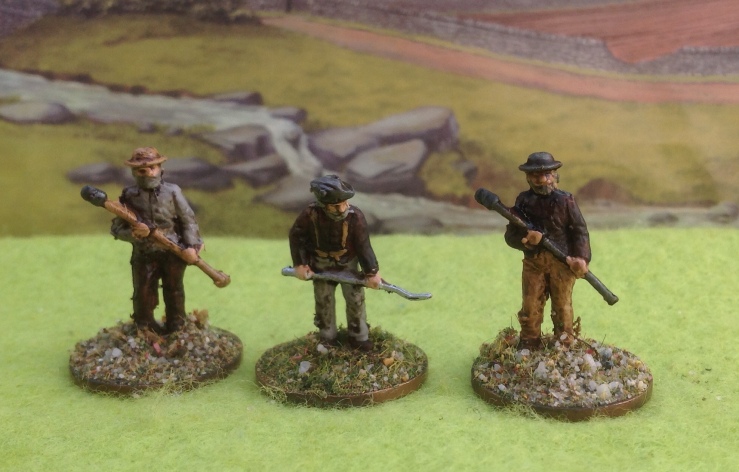 There are also useful Waggon Train female figures who could double up as nurses and a Boy from the Waggon Train (who also works well as a tall man with my Peter Laing 15mm figures). Spot the spare RAF crewman, as many of my past railway figures were padded out with German and British Aircrew.

My favourite conversion of the lot came from looking in a tin of unshucked or uncut sprues from the 1960s https://manoftinblog.wordpress.com/2017/09/08/vintage-airfix-tin-hoard/

I looked at the Confederate Artillery Officer and thought – could he become an early Victorian policeman to sort out the unruly mobs?

One snip off a plastic straw or paintbrush guard later and I had superglued a Brunel sized top hat in place. Cutlass by his side, he was soon ready to read the Riot Act as needed.

Reading and posting the Riot Act, our brave Victorian bobby faces a surly crowd of more than 12.

Disperse you mob, else you face transportation or hanging!

So there you are, a man ‘happy with his wash’ and some useful vintage Airfix figures, penny based and ready for action next year.