It has been interesting chatting by email to other gamers like John Patriquin or Alan the Tradgardmastre about Imagi-Nations campaigns as I delve deeper into the involved worlds of the Bronte family’s young fictional countries and characters.

What to keep and what to invent or extrapolate?
In some ways I am finding working inside or through the Bronte fictions are hard work because there is so much detail to them but also much is missing or that only made sense inside their four different imaginations / heads.

I want to steal their fictional geography and fill in the gaps as best I could. Here is my sketch map of a Bronte island country of Gondal, based on Yorkshire:

There are lots of scenario ideas here.

However I think another solution that I will explore further is to jump forward a decade or generation or two, past all the mess of complicated political and personal relationships of the Bronte characters to the Mid and Late Victorians. The Bronte tales are written in the decade before Queen Victoria was on the throne and into the early years of her reign, roughly 1830s / 1840s.

What would the Bronte countries have made of the expanding British, French and Other European Powers throughout the Victorian era?

Jump  forward to the Palmerston forts scares of Napoleon 3rd and the French in the 1850s, along with European Colonial expansion throughout the mid to later nineteenth century.

The Oxford Companion to the Brontes has entries on some of the conflicts before they were born (the Napoleonic Wars) and during their 1830s -1850s lifetime such as the Ashanti Wars, the Crimea and First and Second Afghan War, First Opium War, Russo Turkish War 1828 and Greek war of Independence 1821 – 1828. They would have read about these in the newspapers and journals that their father allowed them to read from a young age.

There were many Wars in the few years after their deaths which give the pattern for what was happening in their late Regency /  early Victorian world. The Second Opium War, the Indian Mutiny, American Civil War, Franco-Austrian War are all mentioned in the Oxford Companion to the Bronte chronology and timeline.

There are many other historical events to take into account of the ‘real’ world that formed the backdrop to the Bronte  Imagi-Nations or Paracosms of GlassTown, Angria, Gondal and Gaaldine.

There are other world events such as the Irish famine and emigration, the Bronte’s father being Irish,  the California Goldrush, along with more Britain based situations 1840s Chartist movement and riots (following on from the 1830s Luddite riots) whilst the late 1840s saw revolution in many European countries. Charlotte  Bronte’s novel Shirley covers this industrial revolution and Luddite period.

The Battles of Saxby

Even the railway boom led to conflict with landowners and aristocrats who did not wish to have the populace on the move and intrusion on their land such as the Battle of Saxby Bridge around Stapleford Park. I’m sure that some of the  Glasstown and Angrian aristocracy would have some of the same concerns.

What of the Angria, Gondal and GlassTown involvement with the First and Second World Wars? Who did they side with?

I’m pretty sure that, being set in fictional Central West Africa and the fictional tropical Pacific islands Gondal (North Pacific) and Gaaldine (South Pacific), they would continue to be at risk of being Invaded by or invading “real” countries into the 20th Century such as Britain, German East Africa and Japan. Had the Brontes been alive they would have reflected these real events transformed into their imaginary worlds.

There is also the throwing off the Colonial leash and independence from Empire in the 1950s and 1960s.

I wonder how the Angrian Defence Forces dealt with WW1 colonial campaigns in Africa? Problems with the WW2 Vichy French rulers of Frenchysland off the coast of Angria?

I wonder how the rival provinces and rulers in Gondal or Gaaldine dealt with the Spanish / American colonial conflicts in the 1890s or the Japanese Pacific campaign after 1941?

I can see it now, the Bronte fictional countries but armed with early light tanks, bicycles, biplanes and Machine guns skirmishing in the tropical grassland jungles moors and rivers (fused / mixed with their familiar Yorkshire moors).

Being Imagi-nations, there are no restrictive uniform charts, and there is little or no guidance from the text to such things. This gives lots of freedom to experiment or invent with colour schemes but this is frustrating also. No comfort zone of uniform books or Osprey titles, but lots of period inspiration from them!

I’m trying to loosen my paint schemes on existing 15mm and 54mm figures and ones on the painting tray to make them flexible for real or fictional campaigns. Rebrand them with officers and flags and then campaign away, much as James is doing on the Quantrill’s Toy Soldiers blog.

Some of the Bronte books such as Branwell Bronte’s books edited by Victor Neufeldt are £30+ academic reprints each – in a trilogy – ouch! I have one. The others out of stock / print.  Maybe another time.

So I am “making do” with the digest of these stories in the extensive footnotes in cheaper paperback reprints secondhand, including Charlotte Brontes Tales of Angria edited by Heather Glen (Oxford) and the Oxford Companion by Christine Alexander, a useful A to Z of the Brontes lives and works. Helping me puzzle out and fill in my fictional Maps more …

I think if the Brontes had been born a generation or two later, the Bronte sisters and brother would have been part of the H.G.Wells science fiction generation, contemporary with H.G. Wells, Floor Games, Little Wars, matchstick firing guns, Gardens and lead soldiers.

100 plus years later, would the Brontes have been writing fantasy / dungeon / Victorian Science Fiction / Steampunk games and scenarios?

All inspired by Branwell’s original box of toy soldiers … 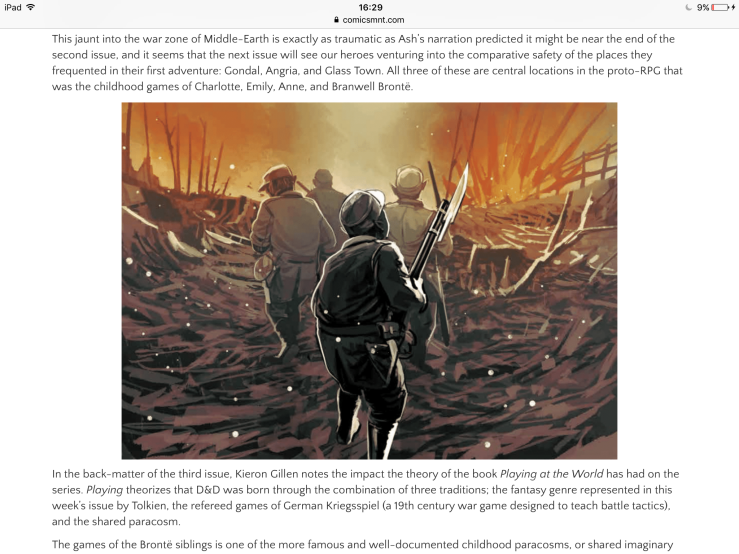