Insertion points for different units of the raiding forces were chosen by dice throw from 5 possible routes (see map below) before the game started.

The desert commando forces and two desert jeep trucks Ragtag and Bobtail enter the area from the old airstrip (insertion point 4). The Yestershire Infantry to appear along the rail bridge in foreground (insertion point 5). 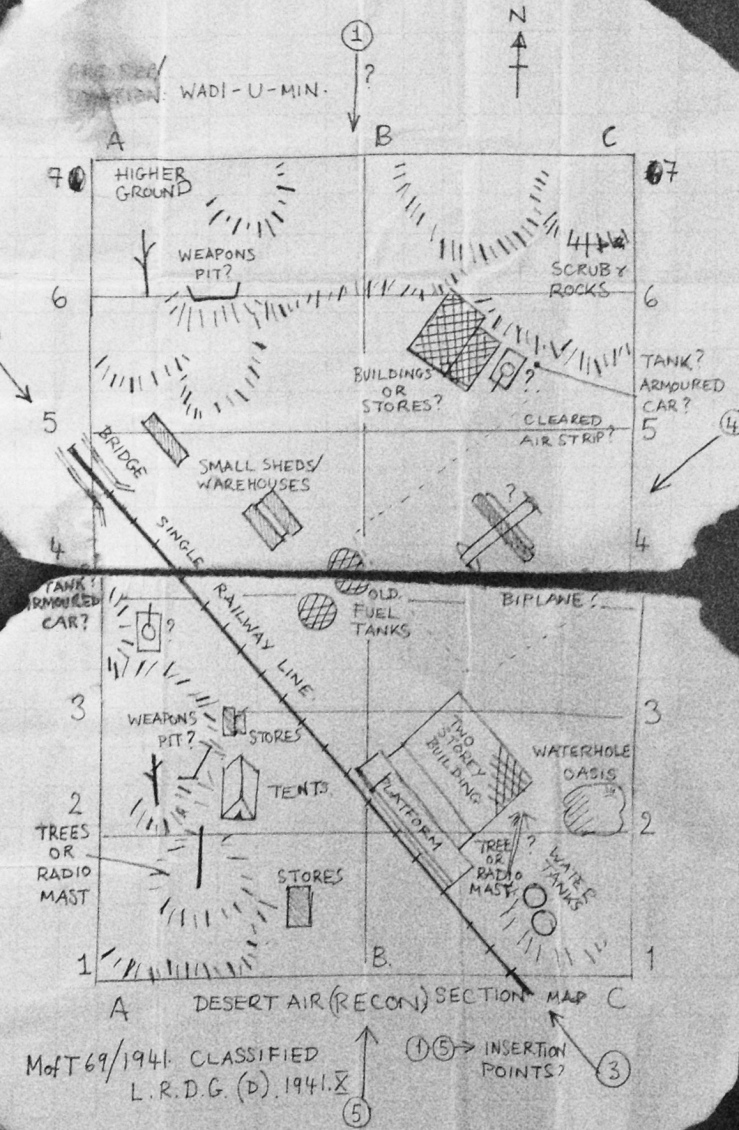 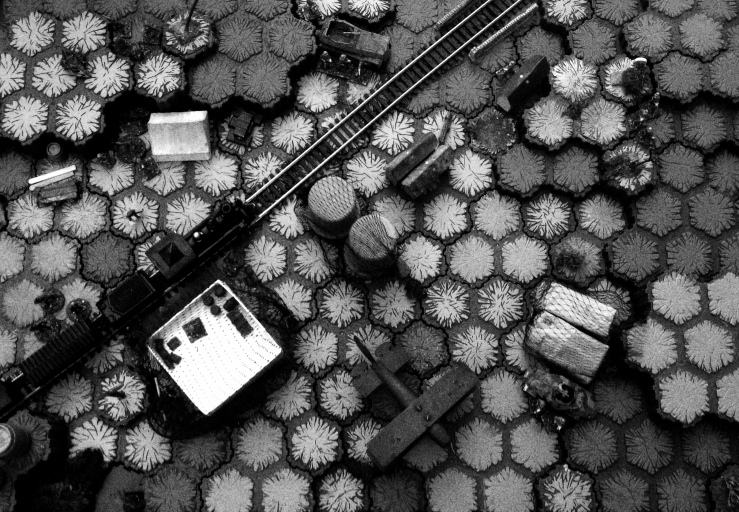 What the Allied raiding forces do not know is how many NAK forces are stationed in the Station Halt building or that on Turn 7 (decided by 2d6) these troops are on standby, ready to be replaced by fresh incoming troops by train. They also do not know that Meyer, an ADC or adjutant to General Von Rimmel is visiting the Special Operations Section (tented area) for a status report.

What the NAK forces do not know is that they are about to be rudely awakened early one morning by a Commando raid. Only a few sentries and gun teams are posted, a few Aircrew busy at work …

Allied elements appear on the board as darkness fades and dawn breaks in the North African desert. 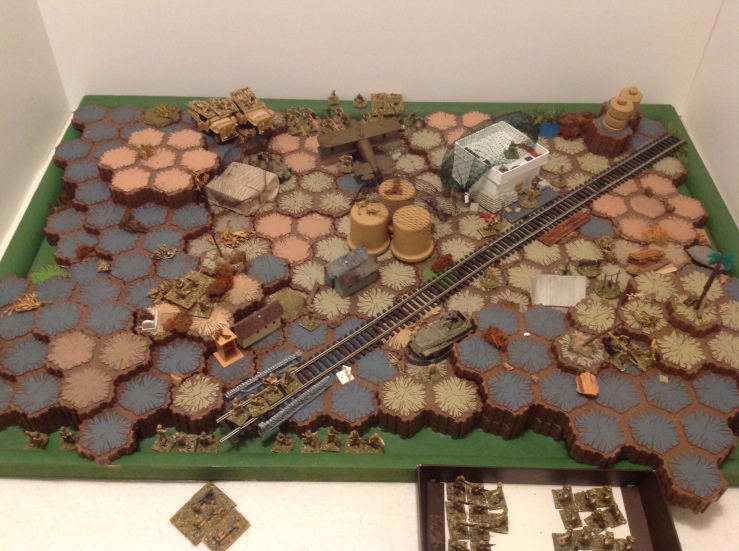 “As the sun rose beyond on the desert hills, Schutzen Wache on sentry duty spotted a flurry of faded khaki rushing across the railway tracks along the bridge … he raised his rifle and fired some warning shots into the air. Achtung! Alarm! Alarm!”

Whilst the Commandos rapidly and silently capture two Aircrew / Groundcrew without alarm being raised, the sentry Sch. Wache by the Railway bridge does raise the alarm on seeing the Yestershire rifles crossing (d6 thrown to decide if alarm raised) with several rapid shots in the air.

Private Hunt lobbed a grenade at the sentry but missed, as did the rifle fire of Mulvaney, Mahoney and Sgt Brittle.

Clumped together by the bridge, Privates Mahoney, Hunt and Sgt Brittle were all quickly caught in the LMG fire of the Halftrack (which is part trackless and under repair). Some of the first unlucky casualties of this desert raid.

The Desert Commandos rush the airfield to silence the air crew and armoured car.

Very quickly the Commando rifle fire and the LMGs on Ragtag and Bobtail, the two desert “jeep trucks” silences the two crew of the Armoured Car.

The PAK gun crew on cemetery ridge managed to knock out Ragtag killing its two crew Ptes. Marrion and Foster. Fortunately the demolition charges and explosives did not explode close to Bobtail, the other Jeep Truck.

First major disaster – Ragtag the Jeep Truck is hit by the Antitank Gun and its crew killed.

The NordAfrika Korps garrison was inside the station halt, awaiting relief by train (2d6 thrown to check: train will arrive with replacement troops on Turn 7). They rapidly deployed to the roof, their fire brings down Commando Private Hemingway who is heading down the flank of the station building.

Meyer, the visiting ADC / Adjutant to General Von Rimmel and air crew sheltered inside the barricaded station halt. A small group of NAK troops led by Haupt. (Captain) Fuchs set out to defend the airstrip.

The PAK gun engaged Bobtail the second Jeep Truck and knocked it out for two moves.

Private Grant of the Yestershires guns down the Half Track crewman, although sinister grey uniformed Klang takes over the LMG on the Half-track.

From this hill, the Antitank gun engages a group of Commandos at maximum range and kills Private Young and Scruby. 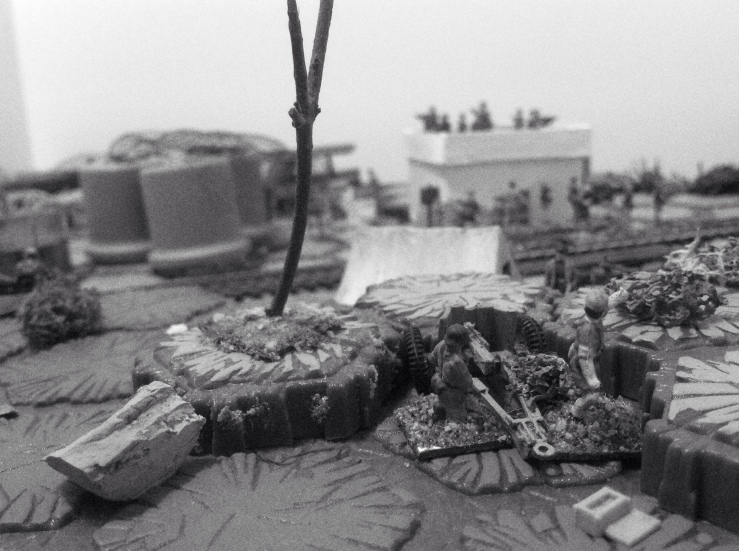 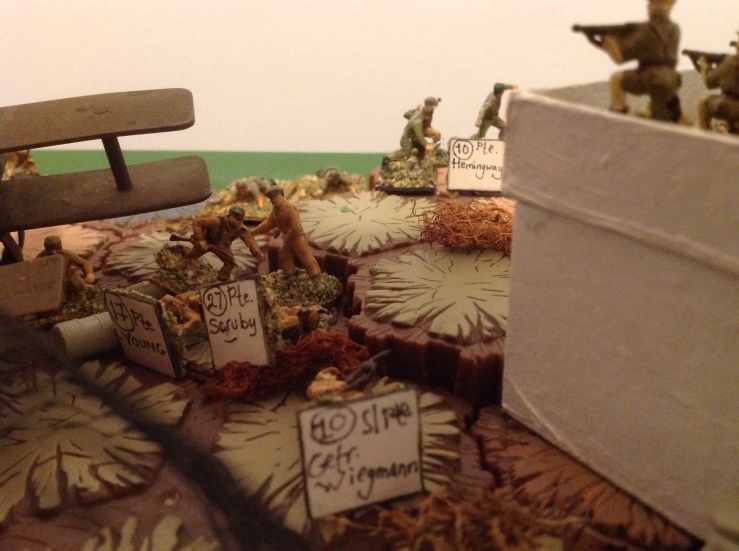 Allied and NAK Casualties from melee and rifle fire from the station building roof.

The PAK gun engages the Yestershire HMG crew and wipes it out, killing the crew (Curry, Stonefeather, Blease).

In return, 2/Lt Hyde shoots with his pistol at Sch. Richter on the roof.

LCpl Mitton is hit by fire from the rooftop NAK troops.

The fight around the oil tanks. Success for the NordAfrika Korps? Maitland may be gone but his time fuse remains! 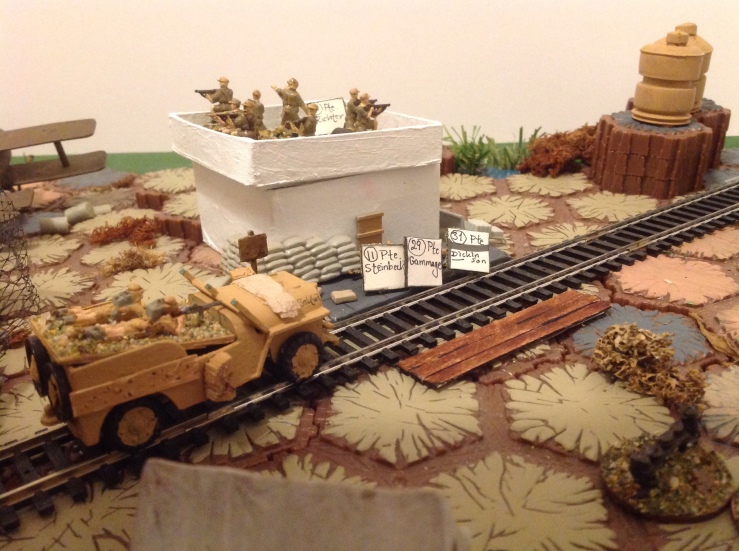 Three Commandos (Ptes. Steinbeck, Gammage, Dickinson) felled by grenade from above as they try to break in to the Station Halt.

Demolition expert Pte Maitland is shot before he can lay any further charges.

In a deadly melee phase Pte Grant, Pte Faulkner and Capt Young and NAK Sch. Junge and Schroeder are killed.

Jeep Truck Bobtail is back in action, heading down the railway track towards the station. Its LMG hit Sch. Vogel on the station roof.

The Yestershire HMG crew brought down the troublesome PAK crew Sch. Beck and Roth at last.

Bobtail the Jeep Truck turns sharply and retreats down the track away from the train and all its reinforcements.

Meanwhile Sch. (Pte) Huber in melee and with rifle fire brings down Commando after Commando including the raid leader “Popsy” before Huber himself is brought down. 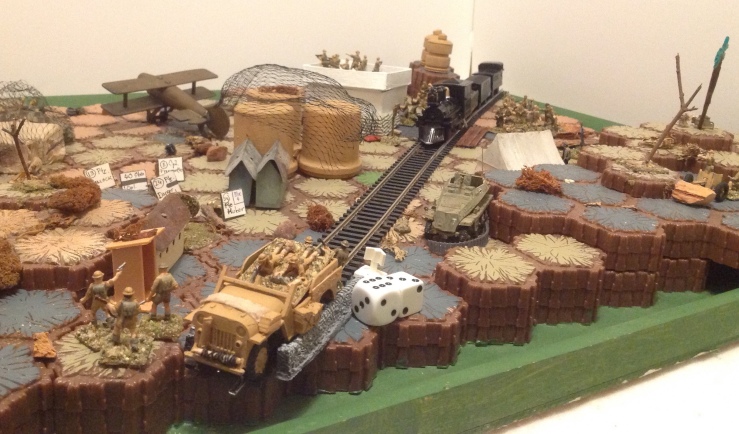 With Raid leader “Popsy” dead and Allied numbers dwindling in the face of fresh NAK reinforcements, it is clearly time to leave. Hopefully soon explosive charges will wreck the area.

Abandoning the heavy HMG, RE Pte Appleby, Corporal Ridley and 2/Lt Bath head to the bridge to hitch a ride out of the area on the Jeep Truck Bobtail, along with Ptes. Wallingford and Mulvaney.

Before they climb on board Bobtail the Jeep Truck, it is hit at long range by the NAK Antitank gun on the hill. Bobtail is destroyed, its gunner and driver Ptes. Gough and Smith are killed. Disaster – but at least their remaining mines and explosives do not explode, injuring the remaining Allied troops.

Elsewhere across the airfield, Commando radioman ‘Sparky’ Sissons calls for the far off retrieval teams to meet him at the pre-arranged desert rendezvous point. He quickly leaves with Ptes. Shepperd and Learoyd. Their two captured enemy Aircrew held for interrogation are tied up and gagged but left behind, alive.

Boom! The first of the oil tanks goes up in flames.

At this point the Allied survivors melt away into the desert on foot. The explosion of the first tank sends the surviving NordAfrika Korps troops diving to the ground to avoid the flames and showers of stones and metal debris as one after another oil tanks explodes, damaging the track and the engine of the train.

The old biplane is toppled over, made further unserviceable. Warehouses and stores are damaged.

Boom! The retreating Allies see more smoke and hear several more explosions as they head quickly off into the desert heat as the sun gets higher in the sky. Time to find their rendezvous points.

Boom! The Yestershires have their packs of supplies, water and ammunition handy. The small commando group are not personally so well supplied until they reach prearranged supply dumps.

They will hopefully regroup and head home to base to be debriefed. However the Commandos failed to bring any prisoners back for interrogation or to discover the activities of the NAK Special Duties Unit. What was going on in the tent for example? What was Meyer, the ADC to General Rimmel, inspecting?

Thanks to our Featherstone Personalised Wargaming approach the names of tiny combatants have been used throughout. 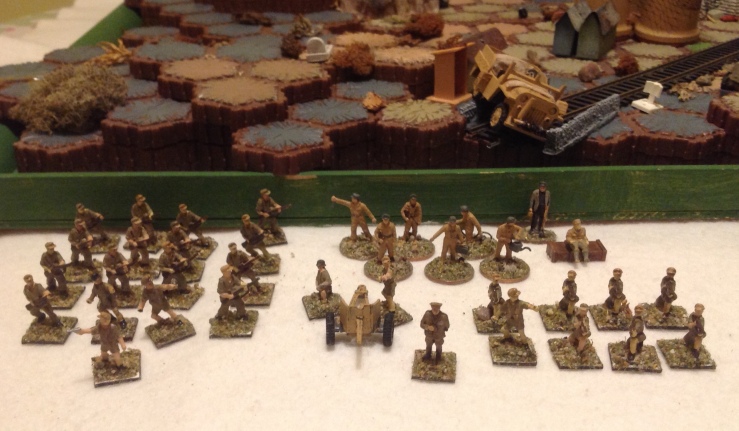 Reflection back on the game and rules

The cluttered terrain amongst the oil tanks and aeroplane made shooting difficult for both sides.

The Commandos and Yestershire Regiment suffered consistently from a series of poor dice rolls throughout on Melee and Firing. No Featherstone Savings Throws in this game. They were given no extra modifiers in Melee or Firing for being Commando troops, opposing tough NordAfrika Korps troops.

Despite the first NAK Armoured Car crew being quickly knocked out, the two anti tank guns on the hill and the half-track LMG quickly did damage to the commando transport and troop numbers. Lots of lucky dice throws. Dealing with these high up entrenched gun positions created many problems for the raiders.

Naming characters does positively change the way you view this game and would be even more effective with a smaller number of troops. Playing both sides with a larger number of characters, it is harder to become attached or show favouritism to any one particular figure.

The element of silent surprise at the beginning needs to be worked on and developed.

In future raids I would include more explosives trained troops, as well as assign rifles and SMGs to those typical ‘useless’ Airfix non-combatant figures without firepower such as the grenade throwers, knife men, observers with only binoculars and gun crew etc.

I used Featherstone based simple WW2 rules from War Games and its Close Wars appendix but with scaled down firing ranges to suit my hexes:

Some rules ideas to tinker and think through after rereading Featherstone’s Wargaming Airborne Operations and Wargaming Commando Operations.

There are some interesting commando raid games and rules on the Grid Based Wargaming website: https://gridbasedwargaming.blogspot.com/2020/01/st-nazaire-raid-deciding-rules.html

Overall a joyful outing for some classic Vintage Airfix from my childhood collection and from Tony Adams’ gift of figures earlier in the year. Figures who never thought they would fight (again).