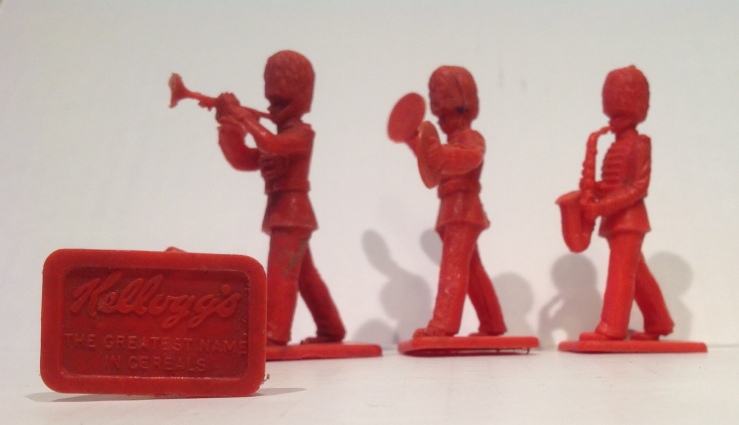 After posting pictures of my non April Fools cereal based gaming figures, I was reminded of Kellogg’s again by Alan Tradgardmastre Gruber’s spirited conversions of Crescent figures.

I’m sure some of my Guardsmen came out of cereal packets.

I checked. Amongst the many toy soldiers in my family collection or that have turned up in job lots are these free guardsmen from Kellogg’s cereals in the 1960s.

I vaguely recalled that our family collection of cereal figures received firing, shooting and bayoneting guardsmen.

Looking through the bases of my tatty collection, it appears that the guardsmen with rifles are Crescent toy soldiers from the late 1950s to 1960s and the Bandsmen are both Crescent and Kellogg’s.

Crescent were not around for sale in the toy shops when I was young with pocket money in the 1970s, whereas Britain’s Herald and Deetail delightfully were.

Bandsmen – Not quite the “cereal killers” I remember!

Crescent appear to have manufactured exact unpainted copies of their bandsmen for Kellogg’s, c. 1958 dated according to the CerealOffers website.

I found these fine bandsmen shown online with original box backs and adverts whilst spending happy hours last week on the cereal ‘premium’ website http://cerealoffers.com, where I found again the cardboard Asterix figures and Weetabix scenes of my childhood.

“FREE IN THIS PACKET at the bottom of the inner bag” – free toy soldiers in your cornflakes – imagine that today!

For example this box back and screenshot of the figures is interesting, as it picks up on the earlier ceremonial craze of the 1953 Coronation when lead soldiers were still around. By 1958 / the early 1960s “Unbreakable” coloured plastic “smart as paint” was taking over for many Toy Soldier manufacturers as hollowcast lead was phased out.

Worth looking at the whole Kelloggs Guardsman page on CerealOffers page for further atmospheric adverts.http://cerealoffers.com/Kelloggs/Cornflakes/1950s/Model_Guards_Bandsmen/model_guards_bandsmen.html

Being late 1950s they remind me of the first offerings of Airfix tiny small scale OO/HO Guards Band and Guards Colour Party. A curious choice in many ways, these first few early Airfix figures but mirroring maybe part of that shift from lead figures into plastic ones in profitable, established or traditional themes of toy soldiers, farms, zoos, railways, cowboys, civilians and then military topics.

“He’ll lead your toy soldiers in and out of battle, on the parade ground, in processions …”

All very well for parades, pomp and processions but maybe the deadliest Kellogg’s “cereal killers” would have to be one of these sets:

or the Knights in Armour?

And the Cowboys and Indians here?

All in all, some very familiar Crescent figures – free. What a delight to get these in your cereals!

Not forgetting Warriors through the Ages: http://cerealoffers.com/Kelloggs/Variations/Puffa_Puffa_Rice/Warriors_Through_The_Ages/warriors_through_the_ages.html

Hugh at Small Scale World has a blog post on these Cereal Guardsmen: