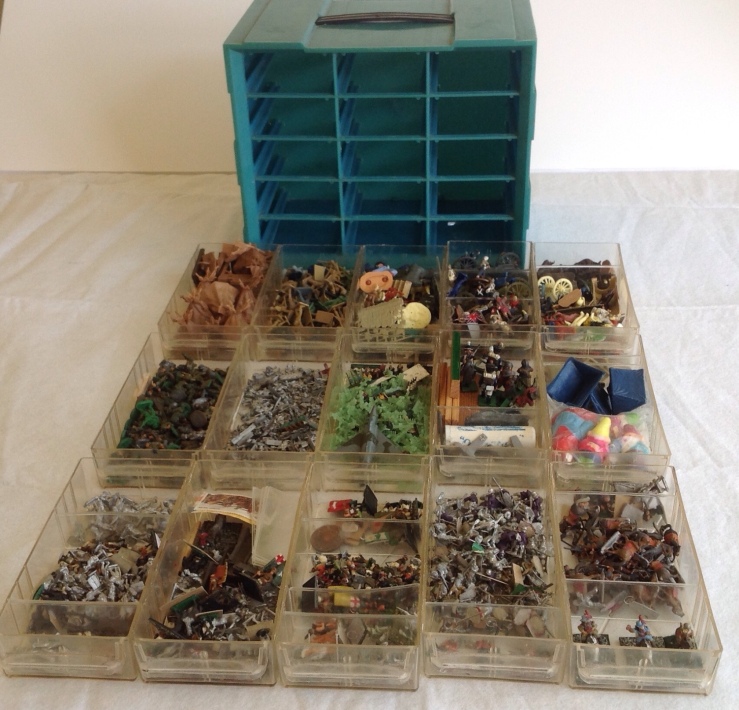 The final four drawers from my Blue Box of drawers are hereby explored, a veritable time capsule of my 1980s games figures containing 15mm Peter Laing and other 15mm figures.

If you missed Part 1 and the background to these posts:

I spent a busy lockdown sunny day sorting through these final four drawers, finally basing Peter Laing and other 15mm figures that I painted mid 1980s and never got around to basing or using in games. Probably a shortage of plastic card pennies at the time.

These white coated musketeers and pikemen need their flag painted, pikes finally fixed and their officer finished. An ECW unit only thirty five years in the making.

There were several other units that I haven’t quite finished since starting them 35 odd years ago including these purple coated musketeers and pikemen. Well worth finishing off.

Fixing or refixing these Peter Laing supplied pin pikes will be a fiddly blast from the past.

A collection or muster of old Peter Laing pikes and useful pins.

Marlburian Peter Laing figures are even more slender and shorter than the later Peter Laing figures – they were Peter’s first figure range c. 1972 and probably the first 15mm figures designed in this new scale. The artillery and wagons are useful for several periods from English Civil War through to Napoleonic and 19th Century.

I featured some of my rebased Marlburians and ECW Peter Laing figures in 2016 here:

I chose Peter Laing figures because they offered me figures that Airfix didn’t do. That’s probably why I didn’t collect his Ancients, Napoleonics, 19th Century, ACW and WW1/WW2 as I already had small Airfix forces of these. Esci plastic Colonials and Zulus also appeared at this time.

I think it might have been the colourful uniforms and especially the ECW flags that won me over after years of plastic khaki grunge.

As well as Peter Laing’s ECW figures and a few Marlburians, I really liked the Scots ECW extension range to do the 1715 / 1745 period.

Amongst some unfinished lowlanders in trews, which I will finish in hunting Rifle Green for another project, I picked up a year or two ago this vibrantly prepainted colourful handful of Lowlanders and Scots, with bashed muskets.

These overlapping ranges – English Civil War with Scots that did for 1715/1745 if you added some Marlburian troops which could share the baggage train helped to double up on figures and save money and paint.

I wonder now why I never went the next step to do the Featherstone ‘Close Wars’ type of French Indian Wars forest skirmishes with my Marlburian tricorne figures and some Laing Indian figures. Probably because I had this covered by Airfix Indians and AWI Washington’s Army tricorne plastic OO/HO figures.

A few odd Peter Laing 15mm Ancients and Pikemen. I have no idea why they aren’t with the rest of their units in Really Useful Boxes. That is the nature of the Blue Box and its drawers, a sanctuary or safe place for odds and ends.

15mm ECW cavalry and personality figures – old Minifigs? – but too chunky and large to match my slender Peter Laing ECW figures. These lances will need repair. Maybe they can join some of my ImagiNations “Cordery’s composite cavalry” type forces. 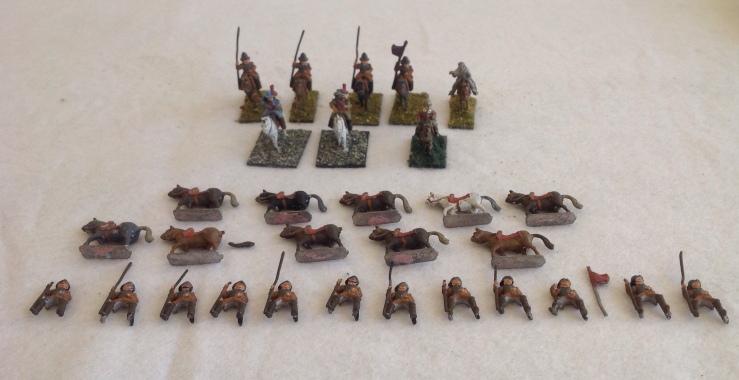 There are a few odd 15mm figures that were probably “S.A.E for list and samples” including these D&D like dwarfish 15mm English Civil War figures from Mikes Models. Having seen these versus the 15mm Peter Laing English Civil Wars samples, I chose the more slender Laings. Each to his own.

The Napoleonic flag bearers may join two ‘scratch’ 15mm Napoleonic / early 19th Century ImagiNations forces from various manufacturers that I have based up, selected from a ‘kilo of scrap’ 15mm figures that I bought from EBay, having spotted some useful Peter Laings amongst them. https://manoftinblog.wordpress.com/2017/01/13/a-few-peter-laing-figures-amongst-the-scrap-lead-mountain/

Now many of these figures are finally based up, they don’t all fit back into the Blue Box of drawers and will graduate to a Really Useful Box, keeping this Blue Box for its odds and ends role.

Final oddments found in these last four drawers of the fifteen in the Blue Box include a single game chit, a severed head and a prestigious military decoration:

Which were your favourite finds out of all three ‘unboxing’ blog posts?