To match a bunch of 15mm pirate and Redcoat preventive men from another random job lot of figures, I have added a coastal defence fort.

This is not the familiar Airfix WW2 one of my childhood but an original Napoleonic one – the Martello Tower.

I remember seeing these curious flowerpot coastal castles on childhood holidays to the south coast. I have a feeling I might have been inside one as well. We visited the Romney Hythe and Dymchurch area of Kent, the curious home of light railways, Dr. Syn, smuggling museums and marshes. All equally fascinating to a small child.

Martello Towers are the ultimate bucket and spade seaside sandcastle with a flag and a cannon on top.

If you are not familiar with them, there are several websites about them. Wikipedia has a wide range of information and a useful photo gallery from round the world on Martello Towers. https://en.m.wikipedia.org/wiki/Martello_tower

There is an entire dedicated website to Martello Towers, including ones that have been undermined by the sea revealing parts of their construction.

There are in their 1990 English Heritage Martello Tower no. 24 booklet online here some wildly imaginative LacePunk / Steampunk original Napoleonic era prints of how the French might invade by raft, balloon and airship etc. – “typical shabby Nazi, sorry, Napoleonic tricks” as the 1805 version of Captain Mainwaring would say.

Several manufacturers make resin or even Paper ones on the unusual Paper Shipwright website (which has free downloads of some things).

Some useful Martello Tower words for instant expertise: The roof gunnery platform floor is called a terreplein. The irony – a French word for a seaside castle cannon platform against Napoleon. Impressed?

So where to start?

What first gave me the idea was a bit of scrap recycling from a recent sweet treat gift, some mini crumble puddings.

Add in the plastic top to some lovely lunchtime Itsu noodles, the only unrecyclable bit but which also comes in handy for flocking trays.

So in Blue Peter style you need in suitable size or scale for your figures, in this case 15mm:

Two plastic containers or flowerpot shapes, one cut down to sit inside the other to give the roof space.

A base or lid upturned to give extra height if needed

A spare cannon such as this one from the Risk boardgame,

Some lolly sticks for the gun pivot

A drawing pin for the pivot

Scalpel or sharp scissors to cut out the roof hole and cut down the inner pot.

Cut a neater hole in the base than I did (wrong sort of jaggy plastic, didn’t want to try the candle / knife method to smoothly melt the edges). This gives you your roof opening.

Place this cut open base over the other pot and work out how much you need to cut off to give you the gunnery space and shelter for the Gun Teams. Pop a figure and the gun inside to get an idea of size.

Cut in stages or strips away at the bottom part of the inner pot until your figures and gun sit right inside. Like Lockdown haircuts, you can’t add it back once you’ve cut it off.

The swivel: The gun is on a raised up platform to give that 360 degree swivel. Measure the lolly stick from middle of the pot top / base. Insert drawing pin as pivot. Put through plastic top. Secure pin bit underneath with a piece of thick card or balsa.

Paint the outside of the tower with an undercoat of white or light grey. Don’t forget to paint the inside (pot base) of the tower roof gunnery platform before you start sticking these together.

Stick your gun onto a short piece(s) of lollystick to step it up step by step on the swivel piece until it can freely move around the rim of the tower.

Dry Run – Once you have tried all the finished bits and bobs together, then glue the cutdown pot onto the noodle lid, and add the top pot.

The stepped cannon is the last fiddly bit to add, the barrel poking above the battlements and freely pivoting. 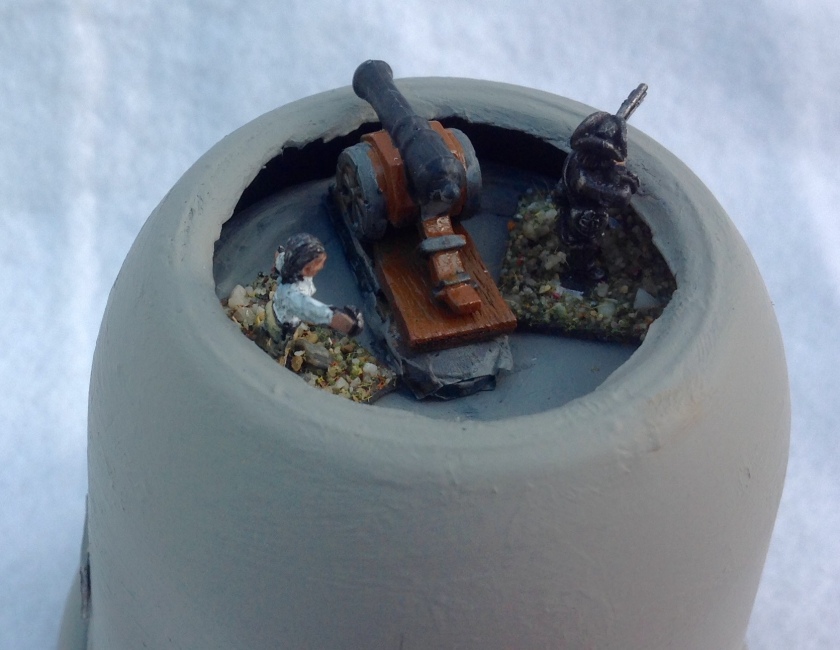 Avoiding cutting out recessed windows and doors into jaggy plastic, I used thin card to make the door and window frames.

These doors and windows were on the landward side to protect them from ship attack. The seaward walls were slightly thicker brick walls to cope with attack from the sea.

An external ladder from the Airfix Commando set was added but could be made from card. The doorway platform and ladder were designed to be easily taken inside or demolished by the tower gun crew.

Cleverly the towers had a rainwater collection from the roof to basement water tank or internal well to survive sieges. Tucked away are musket racks inside, gunnery stores, shot lockers, ration stores. Officers quarters were small but separate from the men’s. It is part castle, part stone naval ship.

Martello Towers were built all around the world so I can feature them in some ImagiNations and Colonial games like the Forgotten Minor States.

What next for gaming scenarios with the Martello tower?

All this is surely a scratch recipe for a coastal / pirate / naval game of Close Little Pirate Wars! Pistols, cutlasses, cannons, blunderbusses, muskets …

This lovely Murray King postcard of Cornish Wreckers vs the Excise or Preventative Men gave me some uniform colour ideas. I have some random tricorne figures to paint up as Customs redcoats.

I mocked up a quick harbour scene with the Martello Tower in place, using a Tamiya stone paving baseplate. 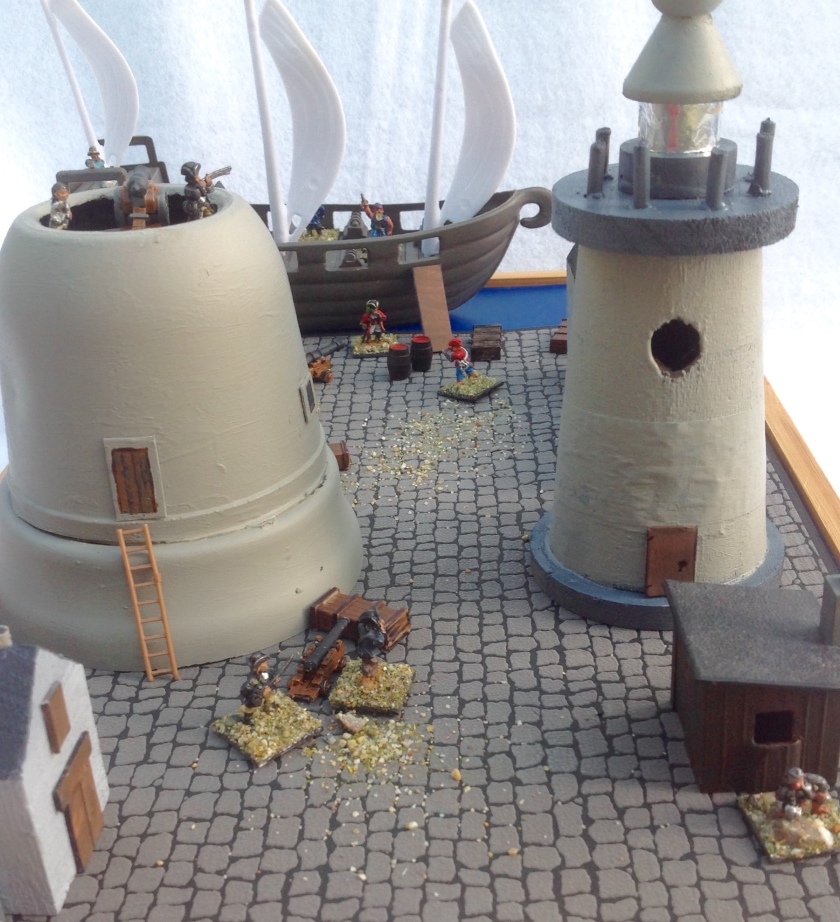 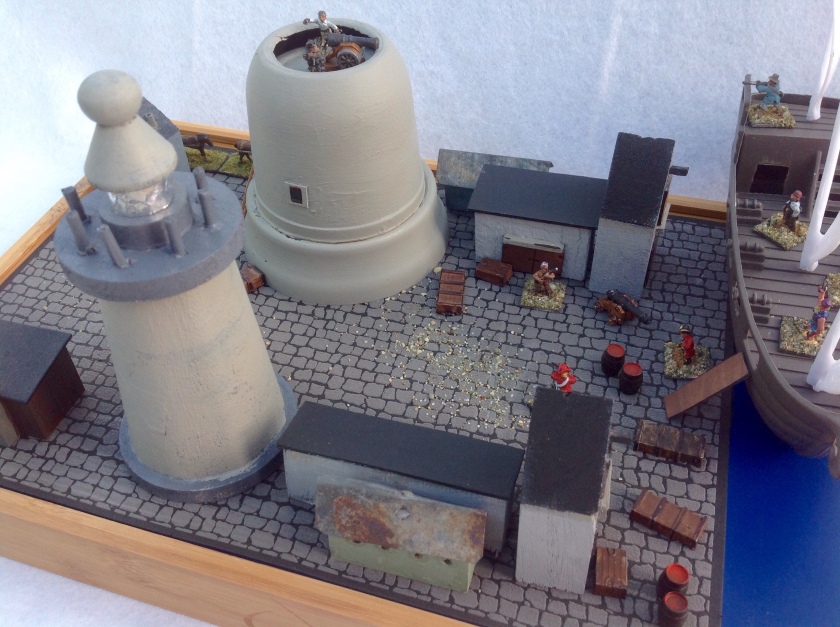 I think you can see the influence of this St Nazaire harbour game in my simple dockyard buildings and warehouses using some crafty Christmas decoration presents: 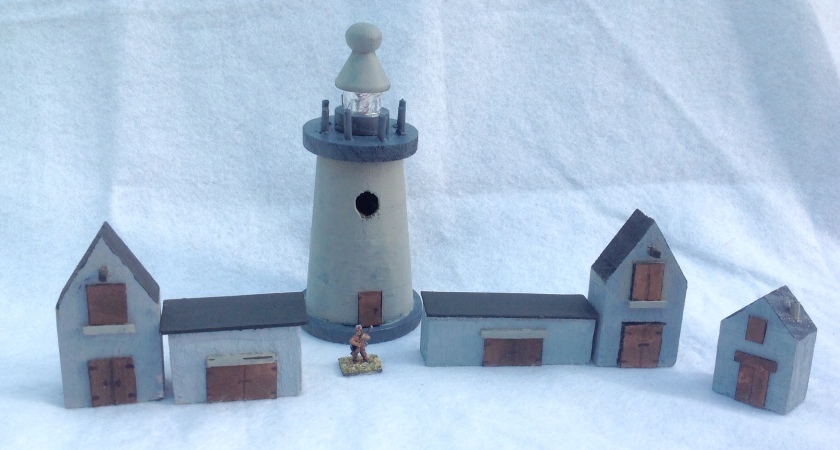 These ‘make your own Christmas decoration houses’ were easy to transform into flexible 15mm warehouses. Other blocks of wood were used to add storehouses.

After 1815, Martello Towers around the world were reoccupied as needed by troops, coastguard and preventive men throughout troubled times in the 19th and 20th century. Some were adapted as signal stations.

Others were reused in WW2 for coastwatch, observer Corps and effectively as pillboxes against German invasion.

So Captain Mainwaring lives on, he can again guard the coast of the Novelty Rock Emporium to the Pier at Warmington on Sea against seaborne and airborne German troops – disguised as nuns? – another “typical shabby Nazi trick”. Mainwaring really ought to have a Martello Tower to defend as well.

10 thoughts on “Making a Martello Tower from Scrap – Fort Crumble”