This Cherilea German Infantry WW2 in dark green plastic with brown helmet, boots and webbing was from the early 1960s and was brittle and crumbling. It had so far lost an arm and part of a base.

I drilled, wire pinned and glued the back foot to the base. I then glued the base fragments to a new piece of mounting board (with magnet strip below to attach to a tuppenny base). This kept the fragment of Cherilea roundel logo on the base, visible for the future. As I made repairs I took a few rough photos on the repair desk as I went – not always best quality in great light but a rough notebook of work done.

What did the missing arm look like? Was the German surrendering? Did he have a rifle? A little web research was needed. 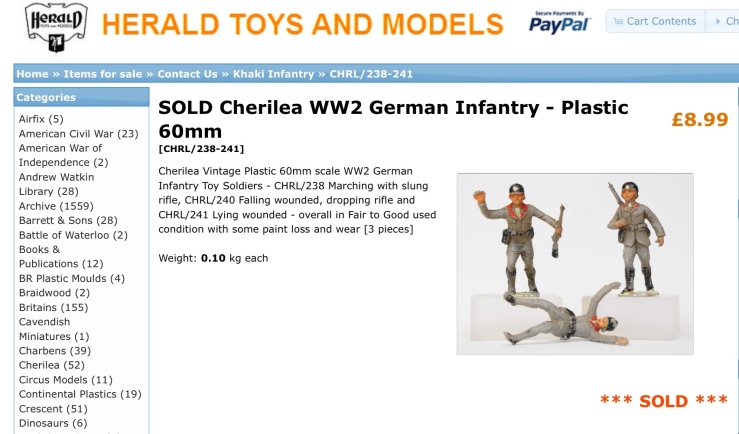 Looking up these original Cherilea figures on Barney Brown’s Herald Toys Website archive pages of sold items, I found these figures but in enemy grey, not my dark green. https://www.heraldtoysandmodels.co.uk/catalog/

These ‘German’ figures were a bit weirdly dressed compared to the more authentically uniformed Airfix and Britain’s Deetail German figures that I had grown up playing with. These 1960s Cherilea plastic issue figures of WW2 Germans had almost 1980s US or NATO “Fritz” helmets.

The green colour? Outside of deserts, German Infantry were made in grey plastic, Americans and British in green or khaki, as every 1960s/70s child knows. I noticed in several books that Britain’s hollowcast and other manufacturers produced their pre-war Grey German Infantry figures as post war green German Infantry, reflecting the Cold War changes in uniform? Were these supposed to be West German Infantry? Allies at last?

At first I thought the missing arm could be in the Hande Hoch! “Hands Up” surrender pose, one of those useless diorama poses along with ‘falling wounded’ beloved of toy soldier manufacturers in the 1950s to 1970s.

The surrender poses seem mostly confined to the enemy / Germans from 1950s and 1960s 60mm plastic down to 1970s OOHO Airfix Africa Korps version 2. The annoying waste of space wounded or dead diorama poses applied to figure sets of all nations.

Subtle propaganda reminder of Allied victory they may be, this was my limited childhood pocket money resources that the manufacturers were wasting on these and other useless diorama poses! I’m sure you could make a special thematic collection of useless enemy surrender poses. Such surrender poses exist from WW1 era with Germans wearing pickelhaube spiked helmets.

This gave me an idea of what the original figure was supposed to be like.

To get the arm sort of right, I gently drilled the missing arm and inserted a long enough piece of fine jeweller’s wire to make the arm and hand. Having built up the bulk of the arm with masking tape, I wrapped the remaining fine wire round a rifle length of thicker wire to make the rifle. 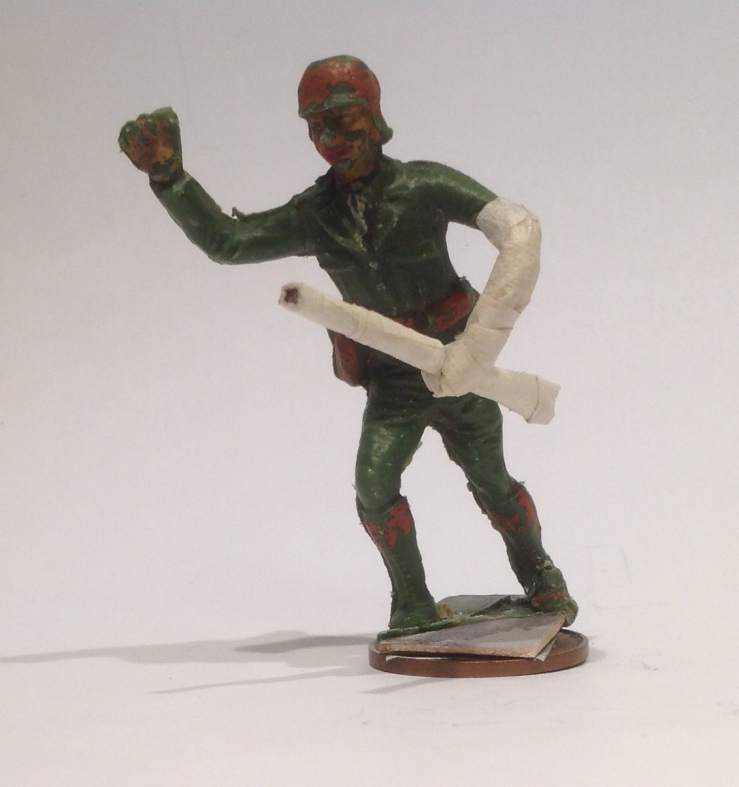 The final stages of the figure was painting and colour matching.

The other Cherilea 60mm German WW2 Infantry was in the bizarre shot falling wounded category. The same drill, pin with wire and glue approach was needed. The rifle was barely attached in two places.

Cherilea 60mm Figure No. 2 in pieces

As these were the only two figures of this type I had in my childhood collection of these odd sized or oversized figures, I noticed a stray oversize Airfix Afrika Korps officer clone figure. He started life as a recent China made plastic parachute toy soldier. I quickly based and painted him up in the same green, flesh and leather brown gloss Acrylic colour to be their officer.

This Hanks early 70mm figure of an Indian* c. 1916 turned up in a job lot, missing an arm. Identified by its base marking and in Norman Joplin’s Great Book of HollowCast Figures, this has to be a ‘plus-sized’ oddity well over a hundred years old.

Hanks Brothers’ hollow-cast figures were an early rival or pirate of William Britain’s figures, only made from 1893 through to the depression (1920s or 1930s?) Former employee of Britain’s, the Hanks brothers mostly made 54mm toy soldiers, with only a handful of 70mm figures.

Knowing this, I was unlikely to find a suitable recast or spare Hanks 70mm arm anywhere.

I made a quick rough arm through bending some old sparkler or garden wire into the rough arm length plus extra wire length for a tomahawk.

New arm tried on for size and fit.

Finally, I had to decide whether to repaint the whole figure or not. At the moment, I thought not.

A few smudges of red, grey green and brown matched the worn paintwork of the original. 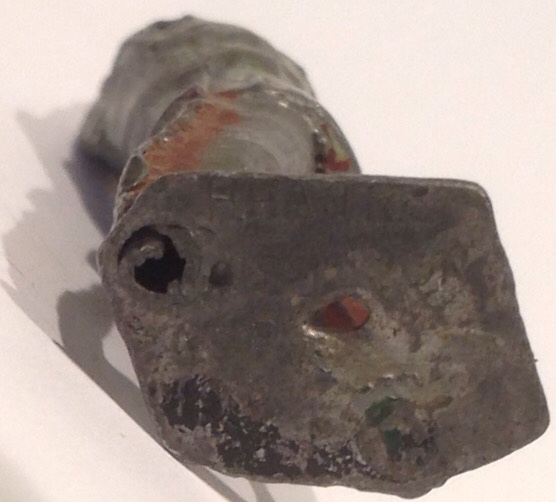 H. Hanks Copyright? in faint writing on the base above the hollowcast metal drain or pour holes. 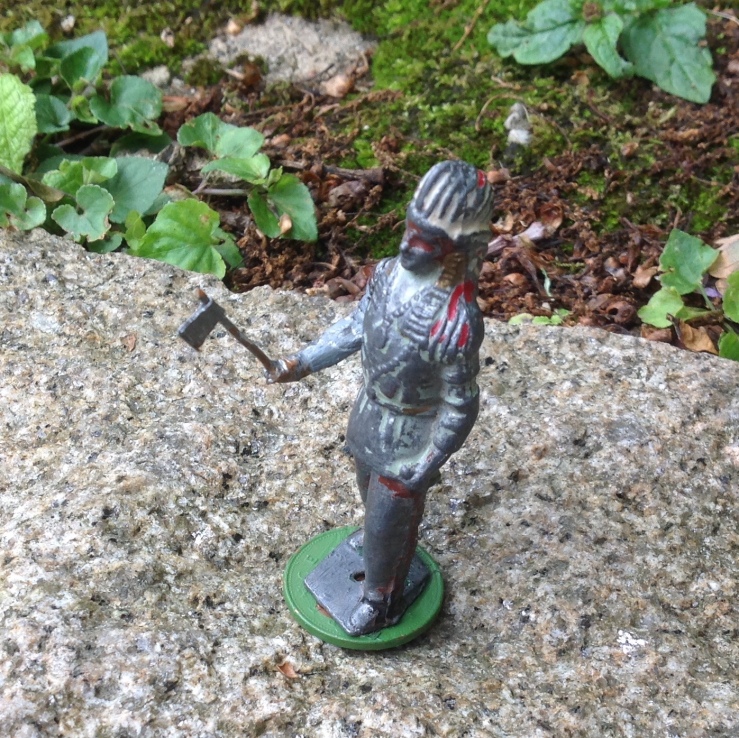 It’s a functional repair, good enough for gaming, with some ‘double sided’ folding masking tape holding it to a tuppenny base, keeping the H. Hanks name visible on the base for the future.

A new arm almost as good as old? Big Chief Tom-ahawk Hanks, ready for action for the first time in decades again alongside 60mm plastic Indians.