I was fortunate and surprised this week to open a battered old Armies in Plastic box crammed full of mixed 54mm plastic figures from Alan ‘Tradgardmastre’ Gruber, he of the Duchy of Tradgardland blog, received through the highly efficient Tradgardland overseas mails and postal service.

Inside, I found three colourful broken plastic 1960s cowboys amongst the part-painted and converted original box contents of Rogers’ Rangers (now on the painting table) and some Timpo Confederate and Union troops.

These were all figures surplus to Alan’s present requirements and kindly sent to me as suitable for my Featherstone Close Wars forest skirmish games amongst my Bold Frontiers trees.

I thought best to tackle the crumbling plastic figures first. To be made playable again, they needed some gentle but solid functional repairs.

The armless figure on the right was detached from its Cherilea base and his legs were broken in several places, as was the shot and staggering one on the left.

With a fine pin drill, I drilled small holes into broken limbs ready for a fine wire insert and tiny dob of superglue. This secures the join, although the 1960s plastic was so fragile in parts that some sections broke whilst being gently drilled. I secured such fragile joins with fine strips of masking tape and sealed with superglue.

Some figures were missing limbs and I had nothing suitable in my bits box, so built up limbs and missing weapons from fine wire, masking tape and glue.

Note: I cannot use Milliput / green stuff type epoxy resin easily at home due to a household allergy.

In the case of the Cherilea gun slinger who was missing lower legs and a base, I used a strip of wire in each leg to secure him to a stiff card base. His revolver or pistol had a broken tip, so a new six shooter was built up with a wire scrub and tiny strips of masking tape.

The shot staggering Cowboy had broken legs, no feet or base. Instead of repairing him as shot and staggering, which is not that useful for skirmish games, I altered one already broken leg to come forward and balanced this now diving figure with a new forearm and wire rifle as balance.

Without a base, I inserted a twist of wire that could be attached with masking tape onto a twopence piece for stability and built up the missing foot with tape.

The new hand and wire rifle join was a bit clunky and needs cleaning up a bit but this figure was already fragile and needed stoutness if he were to fight again on the Tabletop. Fashioning this wire support into a long old fashioned squirrel shooter seemed to work well enough.

He too required a pistol, so again a wire armature was built up into a pistol being fired as Zeke dives to the ground. 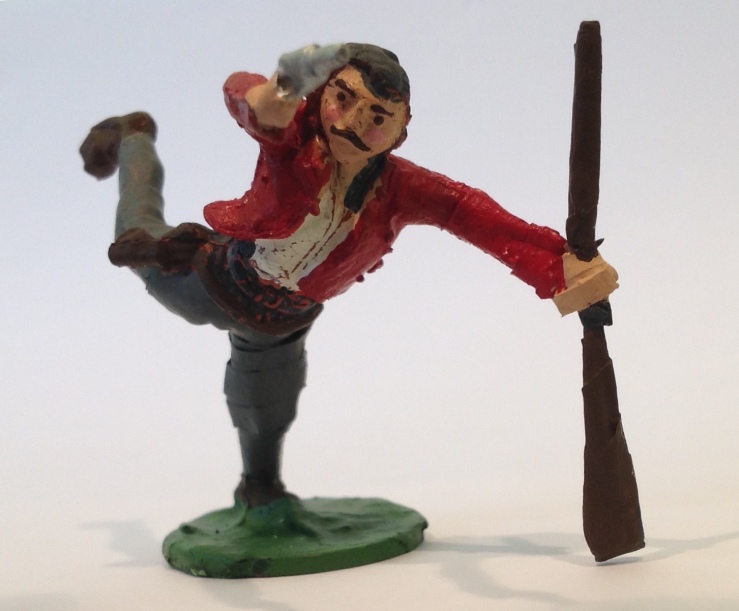 This figure had an arm and a hand missing along with the broken base and legs. I repaired one upraised hand without a pistol as both his holsters are already full. A thin wire stub, built up with thin strips of masking tape and shaped into a wave.

The other arm was more of a challenge. What was this Cherilea cowboy originally doing? I checked Herald Toys Archive sales photos and could not easily see this figure. 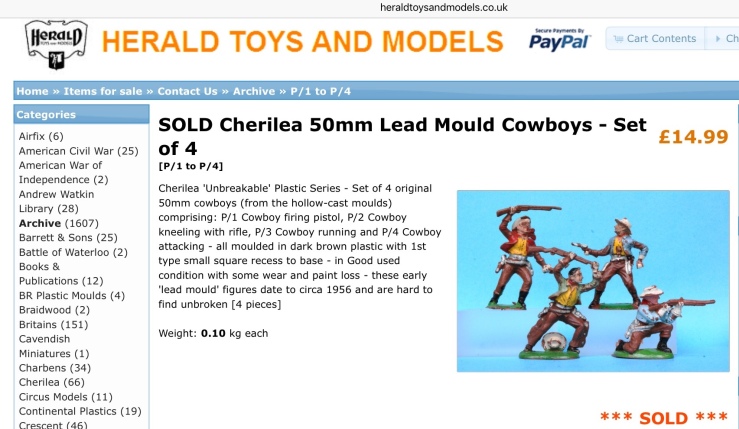 Searching for my Cherilea cowboy – I found the gunslinger pose

What to do with the handless and armless figure? He kept toppling over on his Cherilea base.

I thought it best to stabilise him with a stout piece of garden or sparkler wire, maybe as a standard bearer?

Standard or flag bearer didn’t seem very cowboy. I wanted to keep close to the original bright cowboy colours, although the pale green hat and trousers were a little too bright for me.

Abe still has two pistols in his holster when his handy cannon isn’t around.

Finally, having put in a new wire armature for his left arm, I had left enough wire for a hand to grip a ramrod or sponge for a cannon.

The paintwork on the figures was generally quite scuffed up, so I decided to keep some of the original brightly coloured paintwork and then try to colour match any additional paint with what I had in Revell Matt Aquacolour or craft Acrylics.

In their ‘paint DNA’, they still have some of their factory finish touches such as a shiny silver belt bristling with bullets or a dapper red neck cloth. Hopefully the original piece work factory painter wouldn’t be too offended at covering up the more playworn scuffed sections but keeping some of her work.

I aimed for the traditional toy soldier style face with pink cheek dots and each Gruber boy has grown a natty little moustache!

Next time I do a cowboy shoot out, the other cowboys better watch out for those Fabulous Flying Gruber boys!

In the time it took to stabilise and rebuilt these three fragile 1950s/60s cowboys I could probably have done most of the painting on the Rogers Rangers, but somehow it’s what my hands felt like doing first.

From the surprise postal box, along with the ACW figures to paint and two great Timpo cowboys to paint (one a bandit with money box), there is also a mystery unmarked slender plastic cowboy to identify and a damaged Kellogg’s Indian brave with broken rifle fire to repair.

Thanks again to the Tradgradmastre himself!

10 thoughts on “The Fabulous Flying Gruber Boys are Back in Town!”