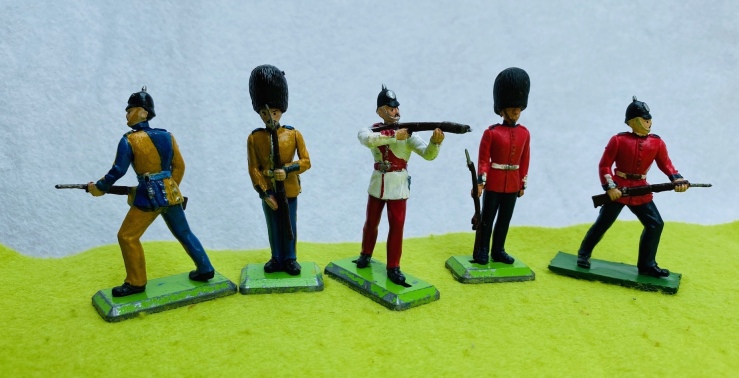 Thanks to a gift of broken and surplus figures from Alan ‘Tradgardland‘ Gruber, I had five damaged or oddly painted Britain’s Deetail Guardsmen to play with.

Some of them already had some bright and colourful but playworn repainted uniforms. I have sensitively repainted some of the more scuffed paintwork to keep these colourful ImagiNations and Ruritanian uniforms.

This is how the figures arrived from Alan Gruber. Many are already repaired as you can see at https://manoftinblog.wordpress.com/2020/08/02/garage-gleanings-plastic-figure-rapid-repairs/

Such wild paint or uniform schemes (OBEs or Other Beggars’ Efforts) deserve to be preserved and enhanced. The blue and yellow ones have a colourful Scandinavian or a Swiss Guard inspired feel.

Up close, the two red coats along side each other goes to show how easily Britain’s Deetail could have made more traditional Line Infantry with spiked Home Service helmets rather than more modern Guards.

The rifle needed to be modified or repaired with ammunition clips removed to make it more old fashioned. The metal base and feet lugs were missing so feet were drilled, wire pins inserted and fixed through and underneath a card base.

These will be robust enough figures for Little Wars style 54mm games.

The Line Infantry style conversion was done simply by repairing the rifle and removing the original head. The new spiked infantry helmeted head was a spare one in the bits box that I had cast from the Prince August 54mm Traditional Toy Soldier Homecasting set.

A hand pin vice drill was used to drill a hole in neck and head and joined by short piece of wire and superglue.

As more such broken Britain’s Deetail figures turn up, I now have several ImagiNations type uniform schemes to add to.