I really enjoyed painting these 54mm Armies in Plastic Woodland Indians, plentiful straps and tassels and all.

They were part of a kind gift of a box of surplus mixed plastic figures from Alan Tradgardland Gruber for my Close Little Wars forest skirmishes.

I introduced them to the garden forests and mountains today, after a gloss spray varnish and final shiny paint bits.

These Woodland Indians of the little known Gull Tribe (see their prized head dress feathers) have little adornment and decoration, unlike other Indian Tribes in North Gondal and North Generica.

They are not as richly decorated as many of the Woodland Indians of the French Indian War and “The Revolutionary War”.

Looking through the uniform plates in various AWI books, Pinterest, box art and figures from different figure ranges (everything from John Jenkins and modern Wm. Britain’s to the shiny gloss Tradition of London range), I settled on a generic plainer shiny gloss look for my under-adorned Woodland Indian ImgaiNations tribe.

Interesting to look at the flintlock and powder horn equipment, tomahawk in its sling, knife held on the upper chest. Much of this equipment is found on the 54mm plastic AIP Gruber’s / Rogers Rangers figures AWI Light Infantry and Rangers that I painted last week.

I struggled a little to find the toy soldier look I wanted but used an old hollowcast painting trick of using bronze or copper skin tones.

So with these gloss toy soldier style Indians in mind I used Revell Aquacolor Acrylic Gloss Leather Brown for the Woodland Indian skin tone. All the other colours used were Matt like the musket in Matt Leather Brown and desert Afrikabraun for the Buckskin leggings and equipment. They were all going to get gloss spray varnished anyway.

There was one interesting pose with a fearsome looking wooden root club. Interestingly the character is carrying a powder horn so has laid down a flintlock somewhere.

Having rewatched the 1992 Daniel Day Lewis Last of the Mohicans film for the Indian costumes, the slow reload of a flintlock musket is obviously a problem for troops engaging charging Natives in ‘Close Wars, type forest skirmishes and melees.

My Ladybird book version of Last of the Mohicans illustrated by Frank Humphris also came in handy for painting ideas. https://manoftinblog.wordpress.com/2020/05/10/classic-close-wars-and-comic-book-soldiers-back-to-the-forest/

Plain Indians rather than Plains Indians?

I could have spent a long time painting different Indian beadwork and breechclout patterns, legging ties etc and facial paints but I didn’t really want to. I tried one club figure with Citadel Agrax Earthshade Wash (brown) but I didn’t really think it would work with gloss varnish toy soldier style.

These were not the only Indians in the Back Yarden Forests.

How would they work in my Bold Frontiers pine forests?

The Gull Tribe go clubbing or the Woodland Indian version of “Here We Go Round the Mulberry Bush” .. 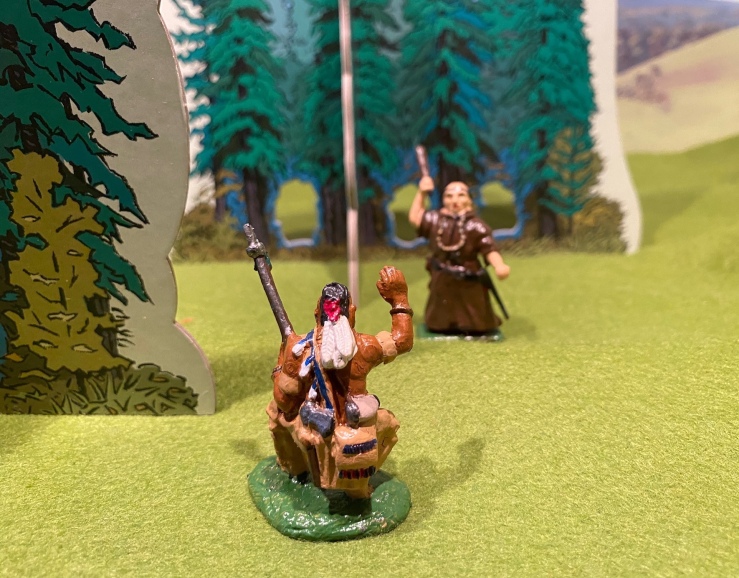 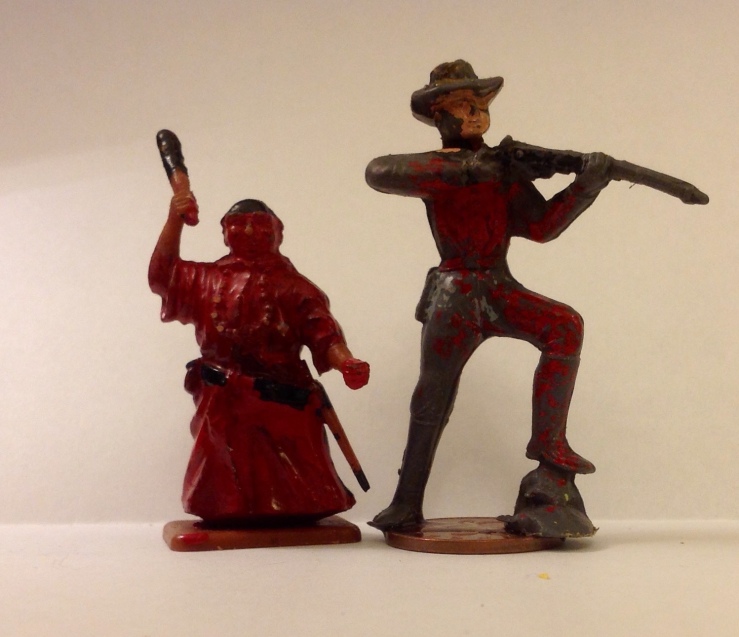 The Crescent / Kellogg’s Cornflakes 1960s plastic Friar Tuck is from the Robin Hood plastic range. We had him at home bizarrely painted bright gloss red ever since I was a child. Now over fifty years on, he finally gets a new gloss toy soldier paint job.

Next time we are in Sherwood Forest, this old Friar Tuck can take part!