My entry for the March 2021 Neglected and Forgotten painting challenge by Ann Wycoff but a bit late for March 4th, International Marching Day #March4th 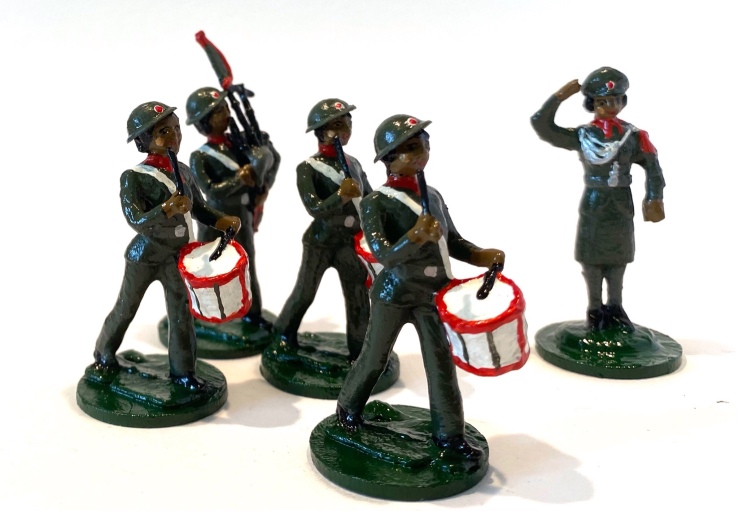 This interesting rusty old female figure (below) was amongst an unexpected gift of some spare battered metal band figures from Alan (Duchy of Tradgardland) Gruber. Thanks, Alan.

It gave me an idea, after watching the Morecambe and Wise comedy film The Magnificent Two, 1967. This is set in the fictional 1960s South American ImagiNation of Parazuellia (think Mexico with a dash of Castro’s Cuba).

I have written more about the film’s fictional uniforms here: https://poundstoreplasticwarriors.wordpress.com/2021/03/05/fembruary-bmc-plastic-army-women-as-the-revolutionary-womans-army-of-parazuellia/

So the Neglected and Forgotten figures?

The female figure was marked by its maker ‘G B’ on the base, wearing what looked like 1980s British Army female uniform, possibly a band figure based on the double arm stubs.

Here are the other battered band figures along with some spare and useful heads from Alan Gruber, which were of no immediate use to his small scale infantry skirmish games. A real mixed bag …

A useful selection of heads including two useful Gurkha ones and a mixture of band figures. Many are still queueing along on the painting table.

There were several royal marine type drummers and buglers but also some headless drummers and two with pillbox hats with a feminine look.

What emerged was a female Parazuellian Womens’ Revolutionary Army pipe and drum band, sporting their battle bowler British type Mark II helmets at a jaunty angle, as in the film screenshot below:

As you can see, the helmet roundels are a red star on a white circle with green surrounding line.

Green, white and red are of course the colours not only of the Parazuellian Revolutionary Army in the film but also Mexico in real life. The Revolutionary red is picked up in the scarves, the green in the khaki or olive drab costumes.

Here is that rusty female figure remade as a Parazuellian general:

This could be a General Carla type figure, leading the Women’s Revolutionary Army.

Three side drummers and a piper, all with the national colours of Revolutionary red, white and green

I tried the figures without helmets but they lacked the charm of the ‘battle bowler’.

I used two suitable spare Gurkha heads from the head pile for the two headless drummers. After filing down these pillbox hats in order to fit the helmets, I added some bushy female hair with tissue paper and PVA.

In the same way a piper’s cape was added with tissue paper and PVA, to cover the join of these slightly outsize (man’s?) bagpiper arms.

The officer figure’s arm stubs (originally for playing a musical instrument?) were removed and after drilling through, wire and masking tape arms were added.

As I used dark earth skin tones on the new BMC Plastic Army Women to match or suggest the South American ImagiNation of Parazuellia, I used the same skin tones and shiny toy soldier face style including copper cheek dots. These work better on darker skin than the usual pink cheek dots.

A final coat of gloss acrylic spray varnish toned the mixture of matt and gloss acrylic together in a suitable shiny toy soldier style.

Music was absorbed into their layers of paint and varnish throughout their creation. Accompanying the painting was some jaunty untraditional pipe and drum music on YouTube, Indian pipe and drum bands – at one point I thought these figures had the look of Indian female troops.

A more South American / Mexican pipe and drum sound can be found with the San Patricios or St Patrick’s Battalion pipe and drums (Mexico City), apparently remembering the Scottish and Irish troops who defected from the USA to fight for Mexico in the US -Mexican War of 1847.

Earworm warning! They can be seen and heard here on a trip to Ireland:
https://m.youtube.com/watch?v=EpTzNdVkTqI

And St Patrick’s Day in Mexico with more pipers
https://m.youtube.com/watch?v=foFyzdkr0os

So a unique set of band figures, made from Forgotten and Neglected figures and inspired by a parade (sadly without drums or pipes) in the closing minutes of The Magnificent Two film. Viva Torres!