How did your childhood toy soldier collection survive, if at all?

How did you preserve your collection of childhood figures or how did they survive? By luck? By accident?

One reason that I can still play with some of my childhood family Airfix figures is this battered old flight case or engineer’s aluminium suitcase.

As far as I can remember the case was passed on to me by my late Dad. Having left home for college and work, the play things of my childhood were being packed up, sorted and some things reluctantly passed on.

The core of my Airfix OOHO and 1:32 figures survived in this suitcase, an Airfix toy soldier Ark.

It has lots of height so this was packed to the brim lid with bagged figures. This stout travel case has meant that this collection has survived several house moves since first leaving home.

Similarly the odd old 1970s battered biscuit tin has preserved a medley of such bagged childhood soldiers. Reopened, they have that familiar ‘plastic death’ chemical smell of ageing figures.

I remember sitting at ‘home’ before the family final move from my childhood home in a sort of Noah’s Ark mode, sorting out who was to survive, who was to be set aside and who take their chances.

I chose one of each Airfix pose unpainted and some interesting painted ones from each Airfix set.

After that, any gaps were filled with more of my favourite veteran figures – all my 1:32 Airfix Italians, larger numbers of ImagiNations Japanese, my few Airfix Space Warriors and Airfix medieval Knights all survived, crammed in.

Some of the more useless mouths (boxed Airfix Modern Infantry, boxed 1980s Britain’s Super Deetail SAS / Marine / Paratroopers) that had no play history or emotional connection were set aside to sell on early eBay type sites.

I’m not sure what happened to most of the Matchbox 1:32 boxes of figures – probably mostly sold – but my few Atlantic OOHO and 1:32 figures survived.

Some of our 1960s and early 70s Airfix OOHO family figures were already brittle and beginning to crumble by then, so they were set aside during sorting and quickly sold, especially the scarce Waterloo ones. This was at a time when Airfix 1:32 and many of the OOHO figures had vanished again from the shops.

This core collection would survive, even when some of the surplus figures were sold.

This case was to put it fancifully my Seed Bank, my Lifeboat, my Ark or Gene Pool from which to rebuild my collection in future. A Touchstone or Portal …

In early Lockdown, I have previously shown my 1980s blue box of varied and random spare figures. https://manoftinblog.wordpress.com/2020/04/13/unboxing-the-blue-box-of-1980s-gaming-figures-time-capsule-parts-1-to-3/

My small group of based 15mm Peter Laing ECW and medieval figures survived in a ‘carry case’ curious birthday present from the family, a converted 1970s/80s LP case with wooden trays, copied from an early 1980s Military Modelling or Miniature Wargames magazine. The wooden trays and figures have survived, the plastic and cardboard LP case has sadly not.

Having preserved a core of my collection in such a way, I am often fascinated by the odd mixed lots of other people’s plastic or hollowcast figures in an old tin that pop up on EBay. I have had such rusty old tins of mixed Airfix passed on to me by friends, workmates or fellow bloggers. 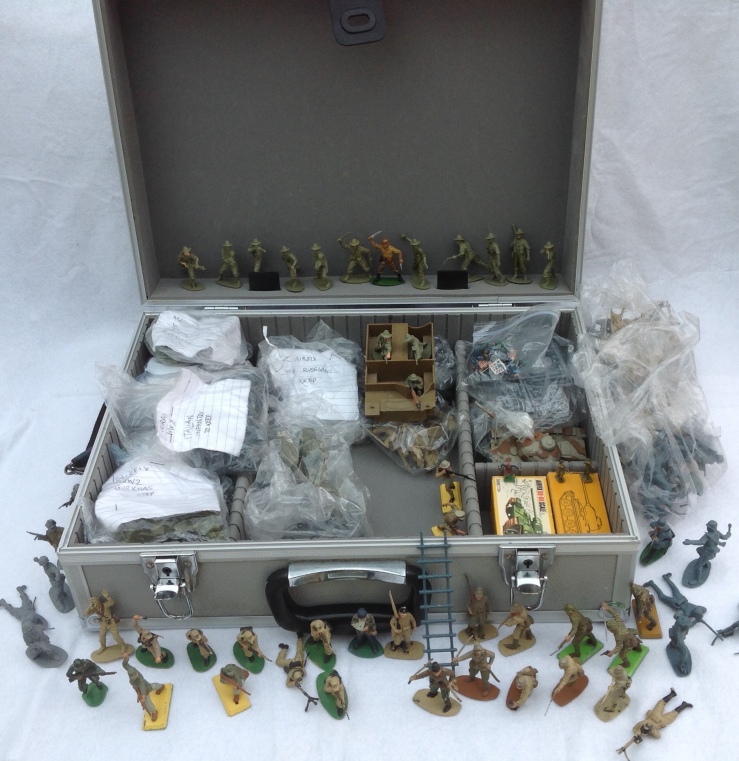 What I like about this metal box is that it has preserved early family ImagiNations sparse paintwork on figures with random selection of available matt and gloss Humbrol or Airfix paints.

Japanese figures with black hats and boots with red epaulettes?

It has also preserved samples of my own childhood and teenage efforts at Britain’s Deetail style or shiny toy soldier style painting on drab WW2 figures, minus the glossy varnish.

Another cardboard box in a loft held boxes of bits of 1970s and 1990s Airfix Playsets, tanks and figures crammed in – one to show another time.

Thankfully the communal family box of motley 1960s and 70s plastics, Herald and Britain’s knights, cowboys, indians, ceremonials and Guardsmen also survived in a box, along with a battered wooden Fort, having done play service for a time in the extended family.

Old plastic bags might not be the most recommended means of storage for plastic figures but it kept them all sorted until Really Useful Boxes came along and rebasing began.

Two by Two? Numbering the Airfix.

Having kept these figures safe, I am now number code labelling the bases of each of my surviving OO HO and 1:32 figures or rebasing them and labelling them before storing them in Really Useful Boxes.

One crammed metal case of bagged figures turns into a surprisingly large number of Really Useful Boxes and trays, not to be stored in the loft or garage to protect these ageing plastics from the extremes of heat. Some of them are now 50 to 60+ years old. Some of them are older than me!

Once done, I will know what I have got, what still sits on the sprue in my red box and blue box Airfix hoard and which are my original childhood figures. I am using a permanent marker Staedtler fineliner pen, the sort once used for marking DVDs CDRewriteables and CD-Roms. Remember them?

Have case, will travel again …

This metal case almost saw service again last March 2020, emptied out for the occasion, as it was how I planned to carry up by train to Woking a selection of my 54mm snowballing and Scouting Wide game figures and terrain for the Little Wars Revisited 54mm Games Day. The emerging Covid situation had other ideas on this occasion but maybe someday soon …

12 thoughts on “Two by Two into the Metal Airfix Ark: The Case of the Metal Box”