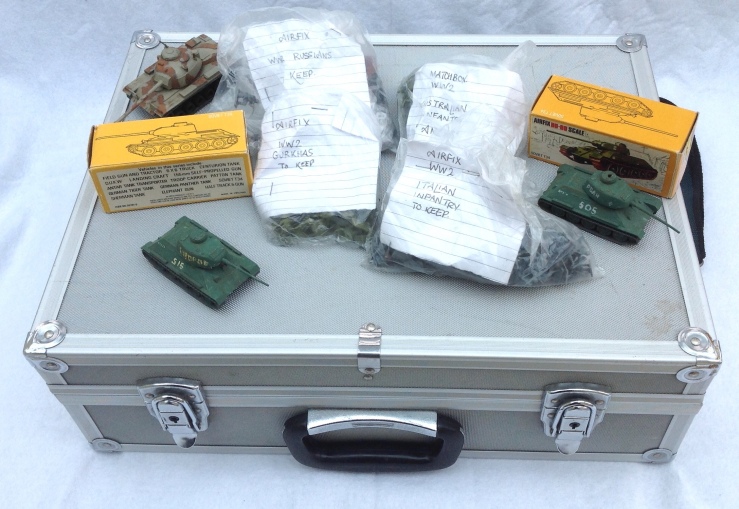 This weekend gone I have been “Flocking and Basing” version 1 Airfix figures from our 1960s family collection that I first painted back in the early to mid 1980s. Only a mere gap of 35 years or more to finish them off and get them back into gaming condition again!

Part of the joy of rediscovering what vintage Airfix was stored in my Flight Case was deciding to finish off painting and basing familiar figures from my childhood such as Version 1 Airfix troops.

Part of this week’s F and B – “Flocking and Basing” involved small painted groups of:

These slight of stature Version 1 figures were sculpted from 1959-74 (according to Carbonel) by John Niblett. These stylish but small, and to some crude, 1960s figures were replaced by the Version 2 Airfix in the 1970s, sculpted by Niblett or Ron Cameron. These version 2 figures are the few WW1 and WW2 figures still available at Airfix.com https://uk.airfix.com/shop/figures

By the time I was buying Airfix figures with pocket money in the mid 70s, the older version 1 figures in our family collection had been replaced in the shops by Version 2.

As a result these older but by then unobtainable figures always held a bit of a fascination for me. They were my special elite troops and I preferred the older figures.

Today many of them are fragile and the original Airfix version 1 moulds are reported lost in the Airfix / Heller period. I think they have a certain charm that their replacement Version 2 figures often do not. I would happily buy the Version 1 figures recast in metal if they were available.

Here they are, after fifty years or more, Flocked And Based at last – honoured with modern Warbases 1 penny sized MDF bases and Flocking onto PVA glue and green / brown acrylic paint mixture. 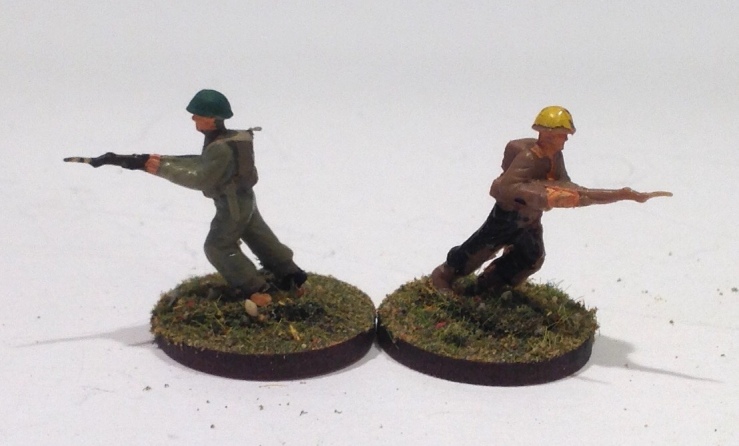 When I found Featherstone’s 1962 War Games for the first time, even though this was by then the 1973 seventh edition in our local library, the original photos by Ken Baker were still in use. I recognised the WW2 figures used as some of these curious and scarce version 1 Airfix figures we had in our collection at home.

I didn’t really understand at the time when and why they changed as I was then very young but I realised you couldn’t buy them in the shops anymore. They were all just our family Airfix figures to me. 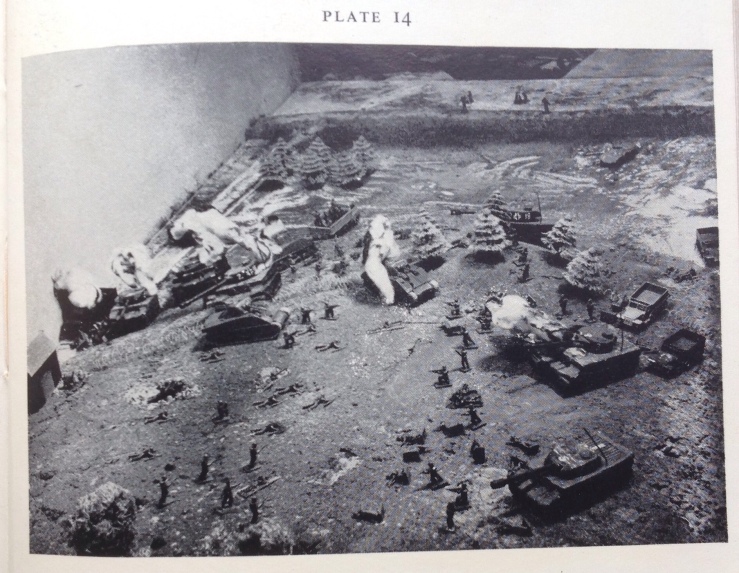 These are the Version 1 type figures seen in Donald Featherstone’s WW2 sand-table game in War Games (1962), when these figures were still quite new and ‘revolutionary’ in their cheapness, availability and conversion potential.

I was curious to read about his use of the recently introduced Airfix kit Sherman tanks (1961) but making do with home made German Tiger looking tanks. The Sherman, Churchill and Panther tank kits from Airfix were available in 1961. The Tiger tank kits would not appear until 1964, the lorries and guns even later.

Worth noting though that by 1961/2, lots of useful OO HO railway buildings, the familiar houses and figures had been produced. The former Airfix railway range is still available from Dapol.

I have two copies or editions of War Games.

One is the well-thumbed and battered ex-library copy Seventh impression of 1973 that I would have borrowed as a child from my local Branch Library. I bought it along with Blandford colour uniform books when they oddly started selling off their older book stock in the late 1980s.

The other is more recently acquired, an affordable (scuffed up and well-battered) first impression or edition from 1962, missing its dust jacket.

The 1973 edition has a 1970 update or addition to Featherstone’s 1962 preface by one single, understated paragraph in a slightly finer, lighter font or typeface: 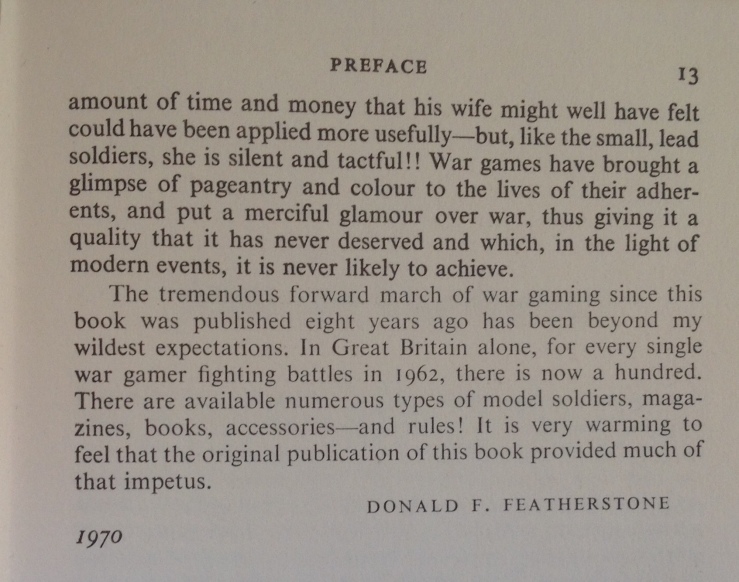 There are some interesting differences between the first 1962 and the 1973 version, not least the growing availability of Airfix figures that were set to revolutionise gaming.

It will be interesting in a future blog post to look at the other small changes to War Games 1962 and 1970/73 in this chapter on Model Soldiers such as the changing fortunes and suppliers of 54mm, 30mm and Flats. 15mm are not mentioned – Peter Laing’s 15 mm figures were still a year or two ahead in 1972 when Featherstone updated his preface in 1970.

Interesting to read that the Eighth Army and Afrika Korps were due to be released at time of writing in 1962. In the brief chapter on wargaming in his Tackle Model Soldiers This Way, he mentions Airfix German and British infantry and British 8th Army and German Afrika Korps. 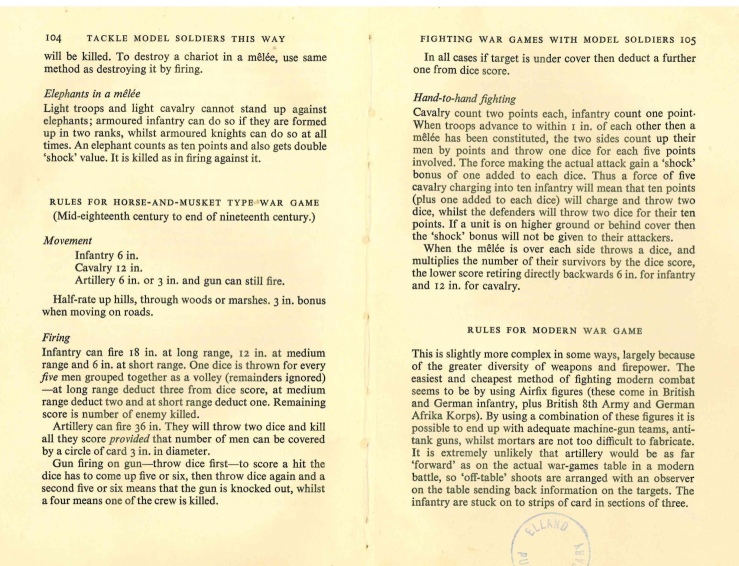 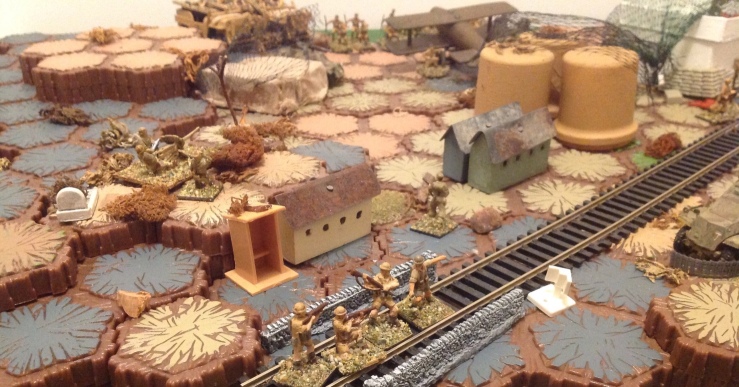 Sadly by my second 1984 edition copy of his 1970 Battles with Model Soldiers, Airfix’s past historical range was listed in detail but it’s irregular availability and that of Atlantic was already sadly lamented.