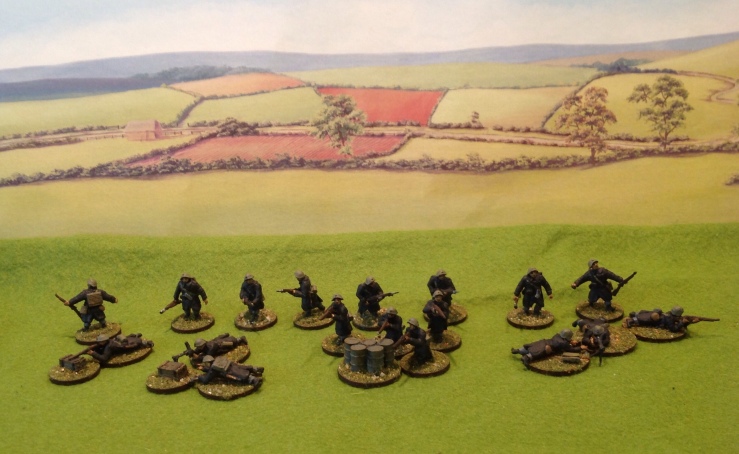 Over the last weekend or two I have been painting a strange mixture of metal 20mm figures in my collection, as varied as 1940s Boy Scouts and Girl Guides from Sergeants Mess, some more colourful 1910-20 Mexican Infantry from Jacklex and these Early War Miniatures 1940 Danish Infantry, along with their Dutch equivalent.

One of the best films or programmes that I have seen in the last couple of years that isn’t weird sci-fi (Star Wars / Stranger Things / X-Files) is 9.April, the Danish film about the first few hours of Blitzkrieg as German forces cross the border of Denmark on 9 April 1940.

This tense drama focuses on the fate of a small handful of conflicting characters (including some usual war film stereotypes) in a platoon of bicycle mounted troops desperately to hold off the motorised columns of the German Army until reinforcements arrive.

The film has that ‘against the odds’ feel of a western with an outnumbered and outgunned retreating outpost of troops with little chance of the cavalry arriving. The cinematography and its eerie soundtrack captures well the chaos and confusion of the short lived resistance.

I don’t intend gaming the historical scenarios from Denmark or the Netherlands in 1940.

Instead I will be recreating those insteresting small scale infantry skirmishes in the forests, heaths and border villages of a small Scandinavian ImagiNations setting called Svenmarck. The kind of small country like Leichtenstein that you go through to reach somewhere else. Further north in Nordweg, it’s a bit more snowy forests with beautiful Fjords. It all exists somewhere on or in my ImagiNations map, probably near Tradgardland from Alan Gruber’s blog Duchy of Tradgardland.

No doubt an ImagiNations equivalent or renaming of Nazi Germany will be required, such as Großreich or GrosReich. All ethical issues about gaming the modern period swept aside, then …

It was from Alan Gruber and also from Bob Cordery of Wargaming Miscellany that I first heard of this film. Alan has converted some 54mm figures with the help of Danish helmets from the late Les White. Alan’s conversions here show the mix of traditional old black, grey and newer khaki greatcoats in 1940 that Danish troops wore, many of the updated newer khaki uniforms still in store and unissued:

Preben Kannik, Military Uniforms of the World in Colour (Blandford)

There is a useful painting guide for Great Escape Games 28mm WW2 Danish troops range and well painted examples of their figures – download the PDF painting guide at https://www.greatescapegames.co.uk/danish-infantry 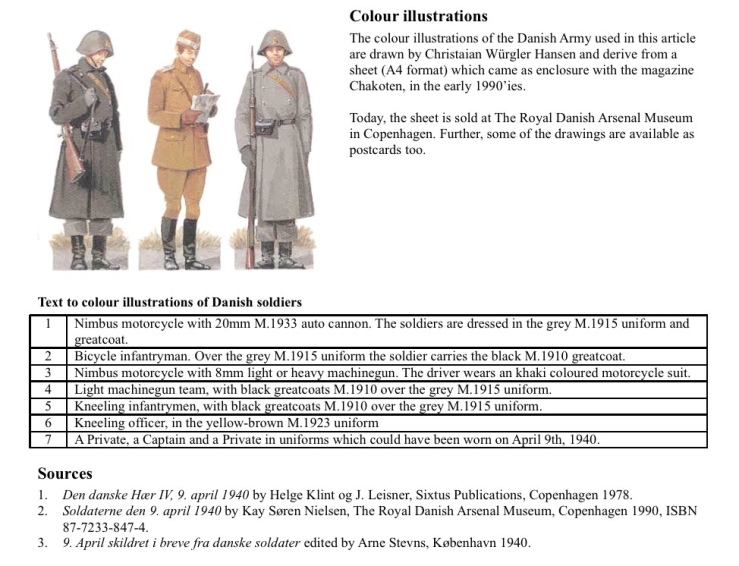 This mentioned the useful research into the history and uniform of the Danish troops in WW2, thankfully published in English by Per Finsted, well illustrated with photos and almost paper soldier like illustrations from an old chakoten.de magazine. https://www.chakoten.dk/The%20Danish%20Army%20on%20April%209th,%201940_complete.pdf

Painting took longer than expected on these figures as I undercoated using a bulk craft acrylic Mars Black that dries shiny rather than matt, leading it to look in some awkward areas like unpainted shiny metal even after I thought I had first finished painting. This showed up in nooks and crannies in photos, after I had already once overcoated the black greatcoats with Revell Aquacolor Acrylic Teerschwarz / Matt Tar Black. A second overcoat of tar black and targeted infill was required.

Unlike the bicycle troops of the 9.April film, there are forstærkninger or reinforcements on the way. More EWM troops from the Danish, Dutch, Norwegian (and Mexican!) range have been ordered from Paul Thompson at EWM for the Christmas cupboard including Tankette Tuesday material and bicycle troops!

Like Annie at Bad Squiddo’s little extras on postal orders, there’s sometimes the odd complimentary surprise item from EWM as a thank you for ordering, such as resin items (from the EWM scenics range?) like the oil barrels and boxes seen in the photographs. Peter Laing used to do this with his 15mm ranges, such as a new sample figure from a new period, in his rapid post returns.

One of my blog readers left me a comment (thanks!) that others may also be interested in re. a free Memoir 44 scenario and hexmap for Denmark 1940 on Kaptain Kobold’s site Hordes of the Things site: