Search around, there are now a fair number of female war gamers blogging (usually more fantasy than historical).

Cards on the table: I am not a club war gamer or club board gamer, never have been and probably never will be. I have always been essentially an occasional solo gamer, but mostly a repairer, converter, painter, collector and general hack-abouter of toy soldiers.

However the ‘social history’ of gaming and war gaming is an interesting one to me as it spread out from a military training tool in the nineteenth century onwards via H.G. Wells’ Little Wars, avoiding a destructive swish of skirts on the nursery floor to a more diverse civilian audience in the 1960s and 1970s boom.

I was intrigued whilst casually researching ‘war games’ on the British Newspaper Archive to come across this curious snippet from The West Briton November 18, 1971 (interestingly around the Armistice / Remembrance period):

“A meeting of wargaming societies from Truro School and Truro Girls Hugh School was held last week at Truro School to discuss the possibility of forming a Wargaming Society which would be open to members of the public of Truro.

About 20 attended the meeting, which was presided over by Mr. Derek Burrell, headmaster of Truro School.”

What makes this noteworthy fifty years later is the words “and Truro Girls High School“.

Both schools are still in existence, both long established (nineteenth century) independent, fee-paying or private schools in Cornwall.

The time of the event is not surprising: 1971 was midway through the ‘first Wargames boom period’ from Featherstone’s War Games 1962 onwards with Airfix riding high: cue vintage wargaming sort of nostalgia.

A month or so later a further interview turns up in the West Briton, 20 December 1971: almost no mention of any girl gamers or female gamers.

I can find no further trace of this Truro Wargames Society involving girls or female gamers.

As club members move on, it may not have lasted very long. Clubs schism over rules, scale and periods played.

A Fantasy and Wargames Society was announced in the same area in the 1983, according to the article, one particularly seeking female members to play Dungeons and Dragons. 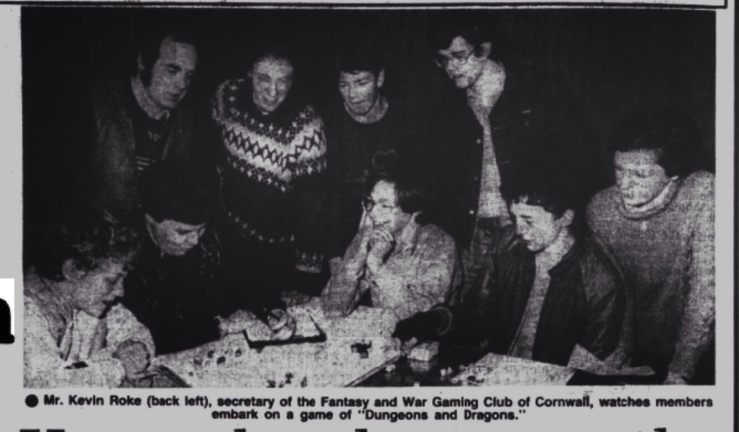 Kevin Roke, organiser of a Fantasy and Wargames Society of Cornwall, (21 March 1983 West Briton) sought more members including women gamers. Keen to “attract some women, secretary Kevin Roke believes, the games being played have appeal not only for men.”

This type of press article is always fascinating, as bemused local journalists try to get their head round a quirky niche hobby and make it sound interesting to outsiders:

An Armageddon Club of gamers also met in the Truro area in the 1980s, maybe not the most sensitive of naming in the Nuclear 80s when the phrase The War Game in the British Newspaper Archive ironically throws up multiple 1980s listings of the local CND groups showing ‘The War Game’ film in village halls.

Another West Briton newspaper snippet about a new Wargames West society was announced at a local boys club in Truro in 1993 suggesting the other 1971 Society or 1980s ones were no more?

As mentioned, the Cornwall Wargames Association and other SW games societies still exist, with a few outposts of Games Workshop stores down West and a declining number of local model shops.

but sadly I somehow doubt this …

Here is a bit of background research from early 2021 into the women around the Wells household when Little Wars was written.