I bought a cheap and strange little job lot on eBay for £5 of these indeterminate sized figures alongside some curious miniature guardsmen, probably from a Dolls House supplier.

I couldn’t judge size too well but I was curious to see if either would be an interesting match for my Peter Laing 15mm figures.

They are most curious and a little stiff and crude. I’m not sure what they are designed to be. They have limited bright colours, a little pigtail at the back and mostly swords. 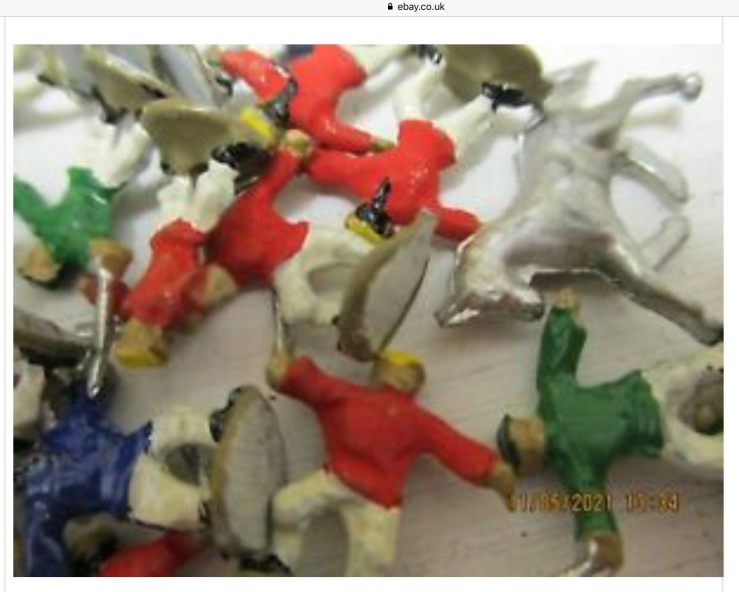 Are they Chinese or Boxer Rebellion type warriors?

Are they home casts?

In terms of size or scale, you can see an unpainted 15mm Peter Laing WW2 German infantryman for comparison.

Whatever they are – they should prove useful sailors or pirates or native troops in ImagiNations games, fiercely waving their swords and a few their strange spears.

If asked “If anyone recognises them as rough copies of commercial figures or as home casts, I would be interested to know?”

One of my ‘anonymous’ readers suggested an identity as Cellmate Miniatures Boxer Rebellion 15-20mm figures – Thanks!

However Tod P. Zechiel himself contacted me today by email from the USAto say that they are not his figures – so the mystery continues.

Tod is now retired and so has time to be back in small production of Cellmate Miniatures Boxer Rebellion figures, selling painted and unpainted castings on eBay. His Tuan Boxer Rebellion rules are also still available as a free download.

So the “Mystery of the Chinese Pirates” – Where are the Hardy Boys and Nancy Drew when you need them?

Whoever they are made by, I like them and I will probably finish their Warbases MDF 1p bases in a similar Earth Brown colour.

You can find out more about Tod P Zechiel’s Cellmate Miniatures on TMP here:

“”While trying not to sound apologetic,” Tod P Zechiel explains, “allow me to inform you of the nature of the miniatures. I am an amateur sculpturer, and the figures are gravity cast as opposed to centrifically cast. The figures are therefore of moderate quality. They tend to be thick and simple, with less detail than other manufacturer’s figures. They tend to have a more pronounced parting line or seam, and larger sprues. You need, as a minimum, a sharp exacto knife to remove the excess metal. A tapered, flat, needle file is even better. To reduce cost, the figures contain lead.” (TMP Info source above)

I can see where the suggested identification of these figures came from .

They were also accompanied by a spirited little metal horse or pony, along with the tiny red guardsmen which I will feature in another post.