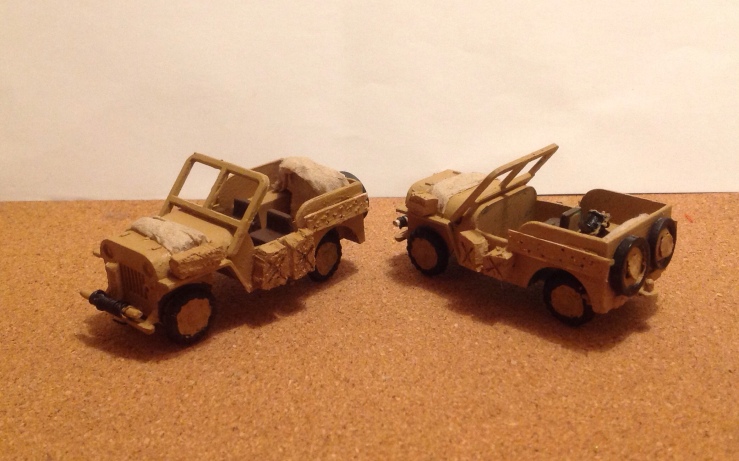 These two Pound Store jeeps have been converted into Jeep ‘Trucks’ for my desert raiding Force. Extra stowage, fuel tanks, winches and spare (button) tyres came from what was to hand in the scraps box, in keeping with their pound store origins.

The old tiny version 1 Airfix as crew do look a little undersized – probably less so with version 2 Airfix which are slightly larger – but if you think of them as desert trucks like the old LRDG Chevrolets, it kind of works.

Monday Update: Responding to comments (below), trimming the windscreen does work to rescale it. It was not easily possible to remove the whole windscreen thing.

They started life in the pound store, a Christmas gift from a charity shop, the usual mismatch mixture of scales. 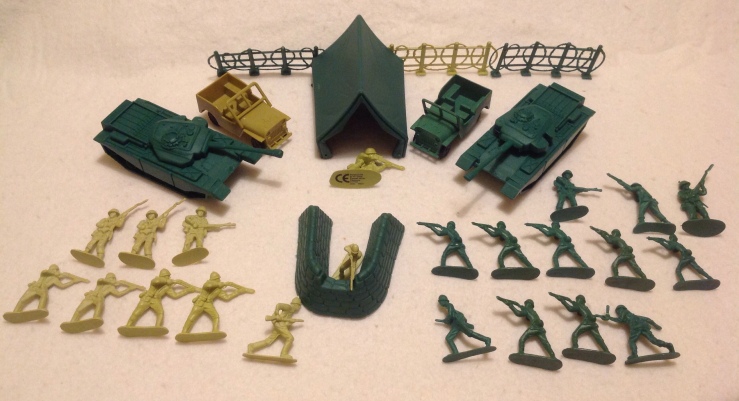 This shows how the jeeps started off. The Airfix Centurion China copy tanks would be in scale for the vintage OO HO Airfix figures.

I wanted to mock up fast a desert storage facility at a railway yard / airfield. Something for Airfix Commandos to blow up. These party popper storage tanks (first conversion attempts) are a bit wonky, as cutting off the necks and inserting this down into the flimsy body did not work as cleanly as I wanted.

The mysterious tarpaulin covered or camouflaged shapes are offcut blocks of wood, wrapped in some light brown serviette tissues I found in a cafe and glued with PVA wood glue.

A few additional figures that might prove useful, so I have painted and rebased some useful figures.

Desert Arabs from the early Airfix set, painted about 40 years ago and rebased.

A handy antitank gun from the Airfix ready made solid plastic vehicle range, the gun that accompanied the halftrack. A little surprise or an extra bit of protection for the facilities at Wadi Yu Min.

These all add some potential for these desert raid scenarios.

1941: Somewhere in the desert, North Africa

One of our plucky Reconnaissance pilots has noticed some enemy activity around one of the old railway halts on a tired old desert branch line that served a pre-war oil prospecting expedition and abandoned desert air strip.

Some building work and fresh build up of stores appear to be in progress.

Using the photos, a sketch map is quickly being prepared by the Intelligence Officers for some of the misfits in our LRDG (D) Long Range Desert Group (Demolition section) to scout it out and if necessary, “light it up” and disrupt the railway.

Civilians or service personnel may be present. Local people should not be attributable for blame or harmed due to LRDG (D) actions. Enemy personnel should be taken prisoner where possible for interrogation.

Intelligence reports suggest that some armoured vehicles may be present and there is the possibility of concealed weapons pits.

My recent post about my Vintage Airfix Version 1 Afrika Korps received a nostalgic welcome from many readers who started their wargaming hobby (career?) with these slight plastic 20mm figures.

The box listings suggest the kneeling officer should also crew the German anti tank gun as the Gun Commander. 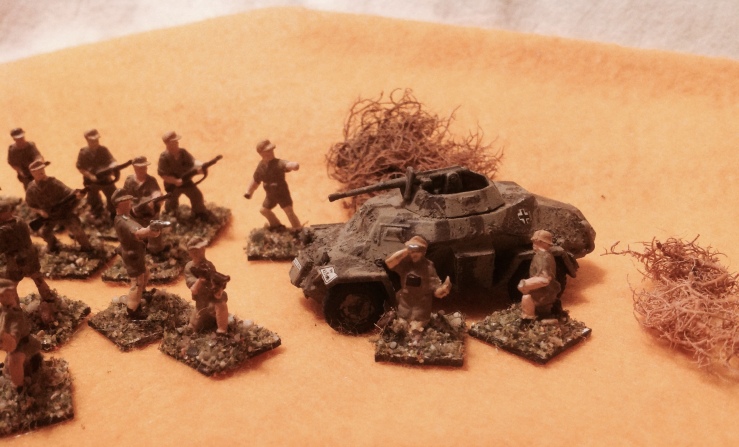 There were also some interesting reader comments about the strange inclusion of the “weird anti-tank gun” which was correctly identified by Ian Dury as a taper bored German anti-tank weapon called the 2.8cm schwer Panzer Busche 41 with a link to https://en.m.wikipedia.org/wiki/2.8_cm_sPzB_41

The sPzB 41 was used by some motorized divisions and by some Jäger (light infantry), Gebirgsjäger (mountain) and Fallschirmjäger (paratrooper) units. Some guns were supplied to anti-tank and sapper units …

The last gun was built in 1943; the main reason for the discontinuance was the lack of tungsten for projectiles (Wikipedia) 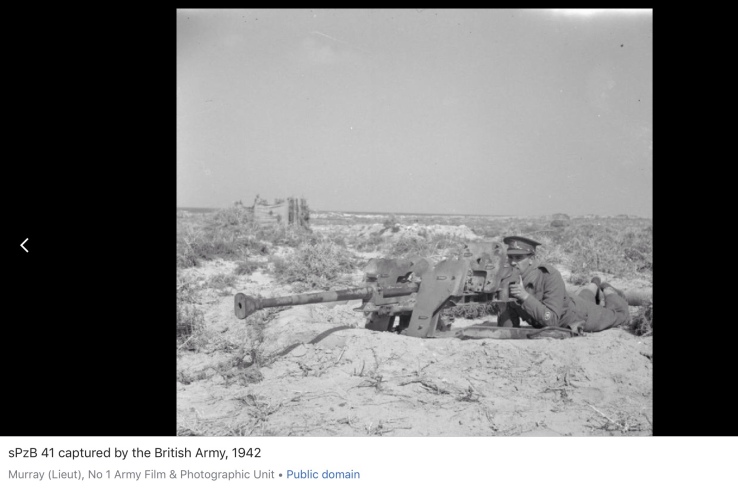 The illustrations show a fairly clear depiction of this early antitank gun which featured in both the first version German Infantry and the Afrika Korps figures.

The sPzB41 Gun shown on the Airfix box art. 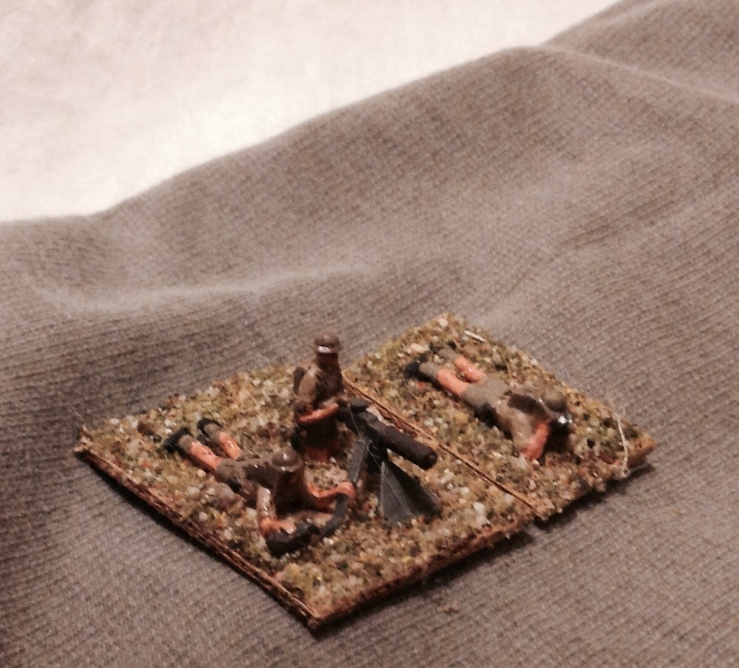 Over the last few days I have been repairing, repainting and basing some 1962 vintage Airfix Afrika Korps that were in the package of 1960s Airfix that Tony Adams kindly sent me earlier this year.

Such 50+ year old (almost 60 year old) plastic figures are getting rather fragile now but I thought it better to paint them up and use them for gaming with care whilst still intact.

Some of Tony’s originals are seen here in their 1960s paintwork by Tony.

As is usual with Airfix, some of the paint had flaked. I have tried to keep most of Tony’s original paintwork where I can, mostly repainting hats and rifles.

I tried a little bit of Citadel Agramax Earth wash or shade, but this didn’t do much for them, having such muted detail as early Airfix generally had. I could have painted in straps and equipment, but this was not only fiddly but mostly this was dust and khaki colour on khaki.

I thought the mix of old and new paint / uniform makes them look like veteran troops.

I also wanted to keep them slightly non-specific, as the ones in the Bergmutze soft caps had the look of a generic private army such as James Bond villains often had, especially the way Tony had painted them with dark or silver caps. I wanted to be able to use them in ImagiNations as desert forces or desert raiders. This is why in the first batch I have included no figures with the distinctive German helmets.

In Jean Christophe Carbonel’s book Airfix’s Little Soldiers HO/OO 1959-2009, this set is listed as being introduced in 1962, the same year that Donald Featherstone’s War Games was published.

Mention is made in 1963 of these desert figures arriving in the wargaming chapter of Donald Featherstone’s Tackle Model Soldiers This Way here https://manoftinblog.wordpress.com/2016/10/26/early-1963-featherstone-rules-update/

I have tried to keep simple paintwork as shown on the early Airfix boxes.

Eventually for opposition I will paint and base some of the version 1 Airfix Eighth Army figures that Tony Adams had in the parcel he sent me and some of my childhood / family original figures.

The 1973/4 update sculpts (version 2) of these desert troops are still available over 45 years later (2019) from Airfix stockists or online.