Brick ruin walls were provided with air drying Das terracotta clay.  This took a week or two to dry!

I wanted to create buildings that could serve a number of uses in a desert scenario or European Countryside on tabletop or garden games.

I wasn’t sure how best to paint these with Acrylics, so went for a ‘Blend’, inspired by two old stalwart childhood favourites, the Airfix Desert Outpost and the ruined house European strongpoint.

After a non-descript base paint colour of sandy Afrikabraun  and brown Acrylic to suggest a sand or mud floor, I used a mixture of white and offwhite Acrylic for the whitewashed walls, followed by a dry brush of brown to weather the walls to a more ruinous state. Several coats of white / offwhite were required.

Lolly sticks, cocktail sticks and wooden coffee stirrers provided the ruined window frames. Pushing a couple of ragged holes through the clay walls suggests that the building has been damaged by shell fire or the walls loopholed by troops.

I still have the smaller clay building to paint, which has been based on  another oddly shaped wooden internal section of the old radio. 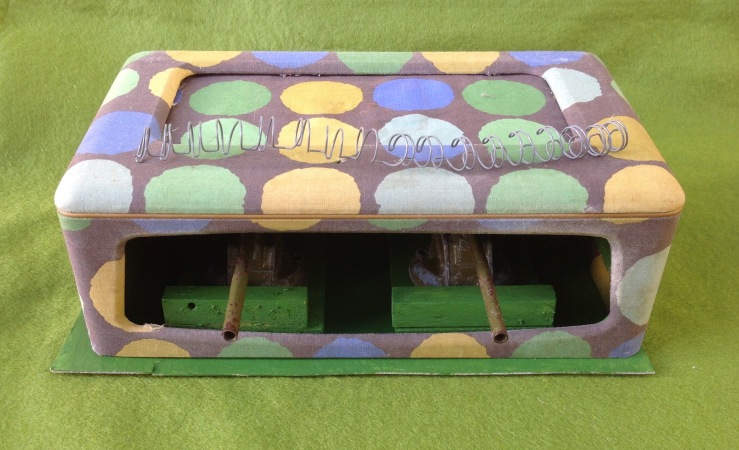 Looking at the other part of the old digital radio, once I had removed the electrics / electronics, the shape suggested some kind of camouflaged bunker.

I was inspired by some of the simple wooden  Hugar style buildings made in the 1930s for Britain’s. Paul Brookes has written a recent Illustrated History of Hugar, available via Amazon.

The metal front speaker grille that would form the bunker roof would be fine on a sci fi bunker. It didn’t look right on a 1930s/40s one, so was replaced by cardboard covered in some of the fabric pattern removed from the radio back before the back was used as the  larger terracotta house base.

Other internal bits of wood from the radio suggested two gun platforms.

I had no plyboard left and had already used the radio base for the larger house ruin, so I substituted stiff cardboard for a base. I tend to use whatever I have to hand, just to get on with the job whilst in the mood.

Amongst job lots of Broken Britain’s figures had been a couple of damaged old Britain’s AA guns without their trailer bases. I had been saving three of these guns for wooden gunboats but two seem to serve well enough here as requisitioned or improvised coastal guns.

A scratch team of repaired Broken Britain’s and other hollowcast lead Khaki gunners  and  Infantry give the right feel. 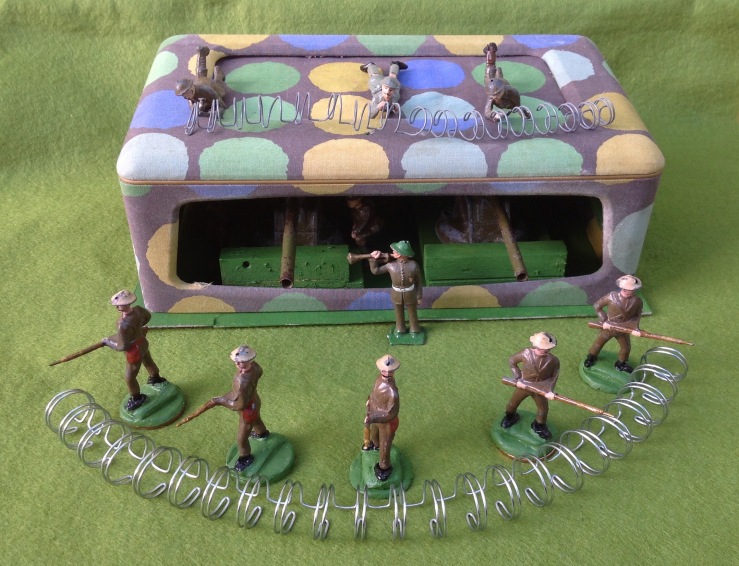 These steel helmeted Khaki infantry mounted on tuppenny bases are Britain’s East Kent Regiment on Guard, all broken figures gifted to me by John Forman rather than being scrapped, all of which needed base and rifle repairs.

I’m not sure who the textile designer was for the textiles on this limited edition (but dead) Roberts digital radio c. 2004/5, but I think the strong blotch camouflage colours are reminiscent of experimental wartime camouflage schemes.

For a bit of barbed wire, the metal spines of old notebooks come in handy.

On a scrap hound basis, I also have the old radio aerial  for mounting model aircraft at different heights, once a suitable wooden base turns up. Waste not …

Huzzah! I have finally finished in just over two weeks visited all the Counties of the State of Georgia USA on the fabulous Forgotten Georgia website: http://forgottengeorgia2.blogspot.co.uk

Thankfully this was online rather than on foot. (Maybe I should have sought sponsorship for charity for this pointless minor achievement?)

I’m not sure how many thousands of photographs that I have looked at of buildings, bridges, ruins and towns, barns, lots and lots of barns, but I worked through the Forgotten Georgia website County by County on the A to Z listings. Strangely there was no Hazzard County.

Just when you think you’ve finished, new photos are added each day, which thankfully  you can check on the home page.

After looking at all these decaying or restored buildings in Georgia, I am quite tempted to order this winter some of the old Airfix OO railway building range of plastic kits, now manufactured by Dapol.

There were some innovative conversions to typical American Civil War / Wild West buildings using the basic Service Station, Signal Box and Booking Hall kits suggested by Terry Wise in the Airfix Magazines in the early 1970s (see the links to the Vintage Wargaming website)

These buildings would be a fine setting for my surviving OO/HO Airfix American Civil War troops. Flip open the pages of Donald Featherstone’s 1962 Wargames to the section of rules for Horse and Musket battles and then you’re away …