***** Three days to go and we smashed it! Well past £25K! Thanks to all my fellow gamers and blog readers who contributed!

As a gamer with a love of toy soldiers and ImagiNations gaming, I have a lot of time for the Brontes and their intricate fictional Regency and early Victorian worlds of Gondal, Glasstown, Gaaldine and Angria.

If you don’t know them, check out the excellent recent books based on these tiny Bronte manuscripts – Celia Rees’ Glass Town Wars and the graphic novel Glass Town by Isabel Greenberg.

You might also know them through the 1960s children’s fiction book The Return of The Twelves (or Twelve and the Genie) by Pauline Clarke, based on the Bronte children’s original wooden toy soldiers. 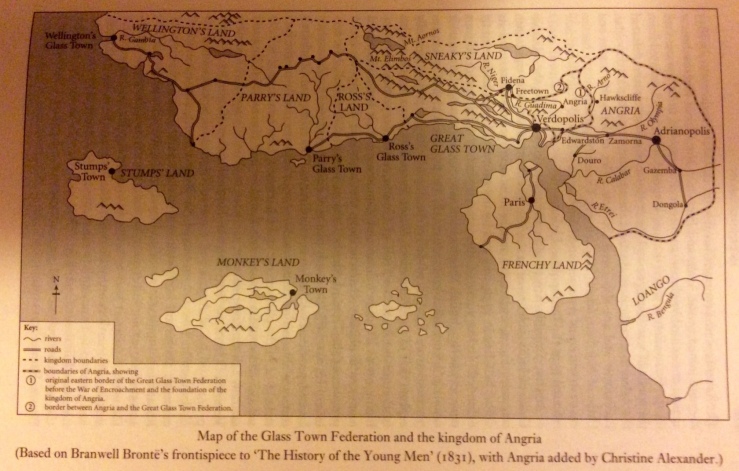 Were the Bronte children some of the first wargamers, ImagiNations gamers and Historical Fantasy RPG players? 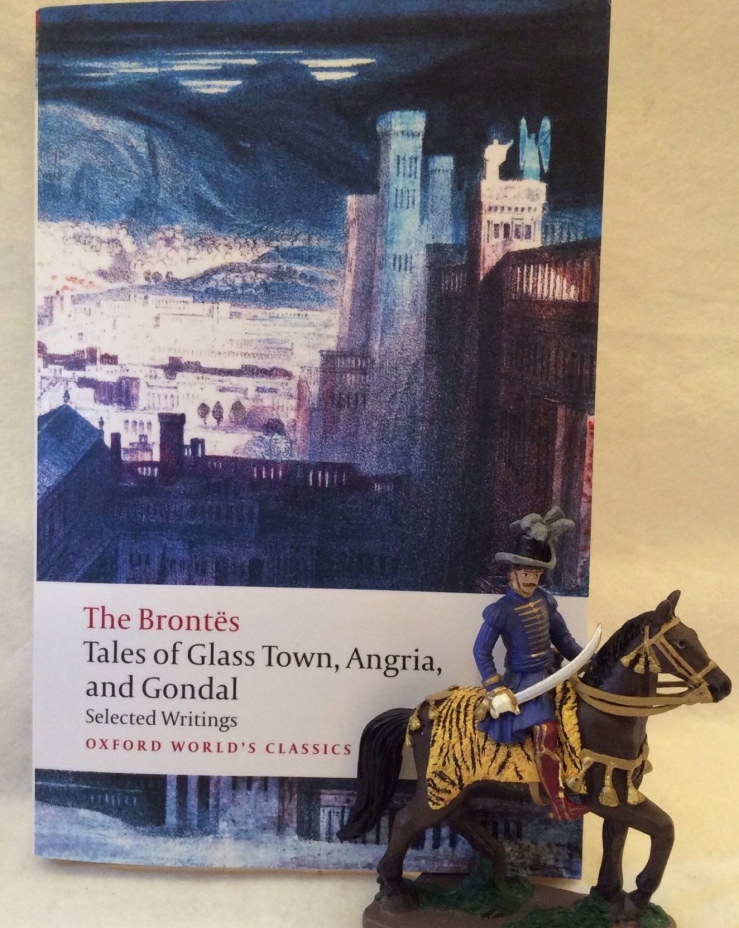 I have been playing Bronte inspired ImagiNations games for a number of years now – check out my page for them on my blog here:

That is why I am supporting the campaign by UK libraries and The Bronte Parsonage Museum in Haworth Yorkshire to keep some of these precious manuscripts of the Law Collection in the Honresfield Library in this country and at their birthplace, rather than disappear into private collections after auction.

You can easily donate here https://justgiving.com/campaign/honresfield-library

A small amount has been anonymously diverted from my Man of TIN hobby ‘war chest’ and ImagiNations defence budget towards saving these precious manuscripts.

Go on – dig deep. Surely worth a tenner or more of anyone’s hobby budget?

This is part of our fantasy gaming, wargaming, toy soldier and RPG origins as well as literary heritage to preserve for all, not a privileged few.

One day I look forward to travelling Up North to go and see the Bronte tiny books and manuscripts at the Bronte Parsonage Museum.

We only have five days left to raise the £25K needed.

One of the problems in using the surviving Bronte fragments of these tiny handwritten books is that they are very disjointed, only some sections have survived and it takes a long while to sort out who is who, with characters with multiple names. Not promising for someone like me who prefers a simple uncomplicated narrative … but Celia Rees pulls this off cleverly in her fast paced historical fantasy adventure story.

This book was a chance find looking up the ‘Brontes’ and also ‘Wargames’ search terms on my local library catalogue. My interest in this book was that I have been slowly piecing together bits of these stories as ImagiNations gaming scenarios: https://manoftinblog.wordpress.com/gaming-the-bronte-family-imaginations-of-glasstown-angria-gondal-and-gaaldine/

Celia Rees has written a young adult novel that, using multiple layers of narrative, wraps the broken and fragmented Bronte ImagiNations narrative in with a modern outer story of young techno wizardry and skullduggery.

Tom, a modern teenage boy in a coma,  is watched over in hospital by a quiet girl called Lucy. He is projected by a crooked teenage bitcoin tycoon ‘techno wizard’ Milo Mindbender back from a modern teenage world of hospitals, YouTube, hashtags and social media into a painfully real ‘virtual world’ of a Napoleonic battle zone to meet one of the feisty Bronte female warrior characters, Lady AGA or Augusta.

There is a suggestion that Lucy has been reading Wuthering Heights to Tom whilst he is in his coma.

Readers of Sharpe novels would enjoy this opening Napoleonic skirmishing section. There are later on some wild rough Scots, more 45 Jacobite than Napoleonic, from Sneachiesland who turn into Rogue’s Revolutionary Guard, intent on sacking the capital.

“But what if you could actually be inside the game?” argues the villain Mindbender.

How? A secret untested prototype little virtual reality gizmo or gadget called the Echeneis slipped into Tom’s ear is involved, developed for gaming by Mindbender. Unfortunately this is an experimental VR (virtual reality) so intense where you can feel pain, be wounded and potentially die … Game Over for the hashtag #boyinacoma?

The Bronte ImagiNations were inspired by the gift to brother young Branwell Bronte of the Twelves, a dozen wooden Napoleonic soldiers.

Some of the Bronte male characters are borrowed like Percy ‘Rogue’ Duke of Northangerland and his sometime allies or rivals, Lord Charles Wellesley and Douro, both versions of Wellington, along with many minor Bronte characters, are also featured in the peculiar Colonial Tropical Africa / Yorkshire of their Glasstown and Angria ImagiNations.

Celia Rees picks up the dystopian, Steampunk elements of the Bronte world and it mixes in well as part of the  science fiction or fantasy genre. There are ‘Fairish’  lands and Underground ‘Deeps’ which bring an edge of Tolkien, pursuit by violent desert storm-like Jinn Spirit Winds and a clunky bit of shamanism. Probably a bit of Yorkshire folklore in here too.

No plot spoilers here but expect the unexpected …

There are small skirmishes with raiding parties with a Reiving medieval feel but made up of Napoleonic troops, laying waste to Augusta’s Northern lands on Percy Rogue’s behalf (he of the Byronic black horse, black banners and black locks). These troops are ambushed by the flint tipped arrows of Robin Goodfellow and the Fairish peoples of the Summer Lord. Flint against Flintlock. Interesting gaming scenarios …

The Capital Glass Town or Verdopolis is riven with revolution, political unrest, Luddite riots and demonstrations, bloodily put down in the manner of the Peterloo Massacre and Chartist Unrest of the 1830s (not far from the events of Charlotte Bronte’s lesser known novel Shirley). A guillotine and echoes of the French Revolution appear.

The multiple layers of modern life, video games and suggestions that we are inside the Bronte dreams of ImagiNations fictions are occasionally alluded to by characters as a kind of dream logic or jarring. The neighbouring countries so different from each other? “the different lands take after their founders“.

One character questions: “I sometimes think that none of it is well, real. Glasstown and all of its people, myself included – we’re mere ideas in someone else’s brain. Part of some other creature’s game…”

There is a fair amount of Regency Ball type behaviour in the Royal Court. Not quite Pride and Prejudice but keep a look out for zombies … well, this adds some Gothic elements.

Later on the Tron or Jumanji film elements of falling into and having to play your way out of a video game are developed and we also enter into the mind, imagination or company of a character who may or may not be Emily Bronte.  Attack helicopters also make a surprise gaming appearance!

The genesis of this book is discussed by Celia here, with inspiration from an attractive Napoleonic rifleman ceramic statuette

Other similar modern fiction takes on the Bronte Imaginations

An enjoyable and surprising book, much less cluttered and clunky than a lot of the Gondal fan fictions on the internet, which cleverly exploits the gaps and confusions of missing sections of the Bronte’s famous little books.

Jen Burdoo the gamer librarian from the USA introduced me to The Return of the Twelves, an award winning and enjoyable but now forgotten 1963 children’s book by British author Pauline Clarke about the original Twelves, the Bronte toy soldiers that had survived through time, kept alive through the power of the Bronte children’s imagination but lost and forgotten.

Last year also saw the publication of Catherynne M. Valente’s hardback doorstep of a book The Great Glass Town Game which I got stuck on halfway through – another attempt needed to read this Alice and Nonsense style inspired Bronte children fantasy http://www.catherynnemvalente.com. It has mixed reviews, often partly on account of its length https://www.goodreads.com/book/show/26810460-the-glass-town-game

One to return to …