An attractive paint scheme (if poor face painting) for a Charbens G I American infantryman figure of hollow-cast lead.

This figure in my collection is one half of a stretcher party, Charbens figure set No. 210.

They are notedly similar in style and paintscheme to Timpo lead hollow-cast GI figures of the 1950s.

Some of the other Charbens GI figures in my collection appear to have been simply repainted (by their original owners?)

Made of hollow-cast lead, they have an animation to them that you could see followed through into plastic figures like Airfix, Timpo, Crescent and Lone Star / Harvey. The lack of bases to the kneeling figure or minimal bases on the Grenade Thrower are ways of saving expensive metal and similar in this way  to the American ‘pod foot’ dime store figures.

Reference numbers are to the Charbens figure list in Norman Joplin’s The Great Book of Hollow-Cast Figures (New Cavendish, 1993/99) which shows this range on page 77 / plate 143.

All these figures are postwar hollowcast lead figures produced by Charbens (London, 1920-66) from 1945 to 1960s when lead figures were phased out in favour of plastic.

The Charbens name came from brothers Charles and Benjamin Reid who set up their own hollowcast business in the early 1920s, one of them having previously worked for William Britain. 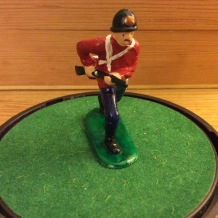 As well as the odd redcoat repaint of dull khaki figures, some figure manufacturers did the opposite and painted their ceremonial or redcoat figures khaki. 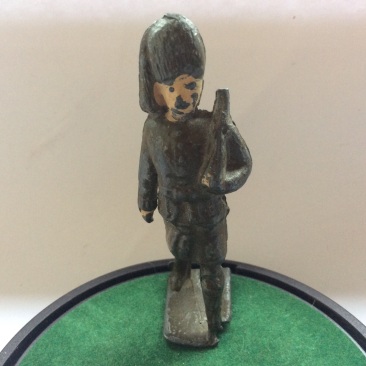 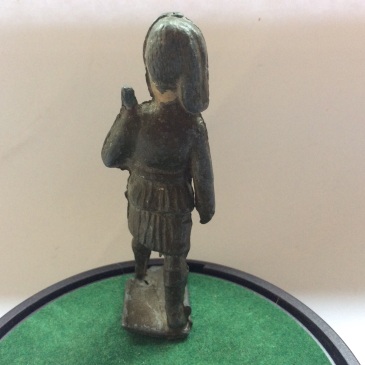 This interesting khaki Scotsman figure joined my collection as a Father’s Day gift. It has a damaged base but was with several Johillco khaki figures.

Several of these khaki redcoat figures are featured in the interesting “Unknown or Unidentified Manufacturers” section of Norman Joplin’s beautiful Great Book of Hollowcast Figures.

Maybe this was wartime expediency, converting a parade or ceremonial range into utility khaki for topical or patriotic appeal?

Maybe this was a childish or parent overpaint?

Interestingly Norman Joplin notes of toy soldier manufacturers that: “Khaki was sometimes repainted with red or blue when Khaki uniforms fell from favour” (page 95, The Great Book of Hollowcast).

Khaki came into use during Victorian Colonial Wars; the redcoats last were regularly worn by British troops in 1885 at the Battle of Gennis in the Sudan Campaign.

Insert your own reference to Corporal Jones in Dad’s Army here in his old red coat, fixed bayonets and “they do not like it up ’em!” Several companies now make redcoat and khaki figures of Corporal Jones.

The factual basis of Corporal Jones’ character in his redcoat and khaki days is set out here:  https://en.m.wikipedia.org/wiki/Lance_Corporal_Jones

A fascinating illustrated article on the development and decline of the Redcoat uniform in Britain and its ceremonial survival worldwide can be found here:

Another good example of hobby learning: how technology of cloth, dye and weapon along with politics, geography, climate and (social) history are all to be found in the now deemed slightly odd but still pleasurable hobby of painting toy soldiers!

The two Boer wars were probably the turning point in tactics and uniforms, developing a trend for clothing matching the battlefield and climate that had unifficailly been going on in India and across Empire since the early Nineteenth century.

It was the end of black powder and smoky battlefields, an age of more individual fighting, snipers and improved rifles, not to mention binoculars, balloons and aeroplanes; all these made bright colourful uniforms too conspicuous. The French poilu soldiers in their red and blue, almost Napoleonic French flag uniforms learned this the hard way in the first years of World War One. The age of drab camouflage colours and in the toy world  “green army men” had arrived.

Repainting the drab green toy soldiers in bright colours has been my mild reverse protest against the age of drabness ever since:

Other people’s repaint efforts now in my collection: https://manoftinblog.wordpress.com/2016/06/16/obe-repaint-figures-1/

Happy hobby learning, painting, collecting and gaming to you all!