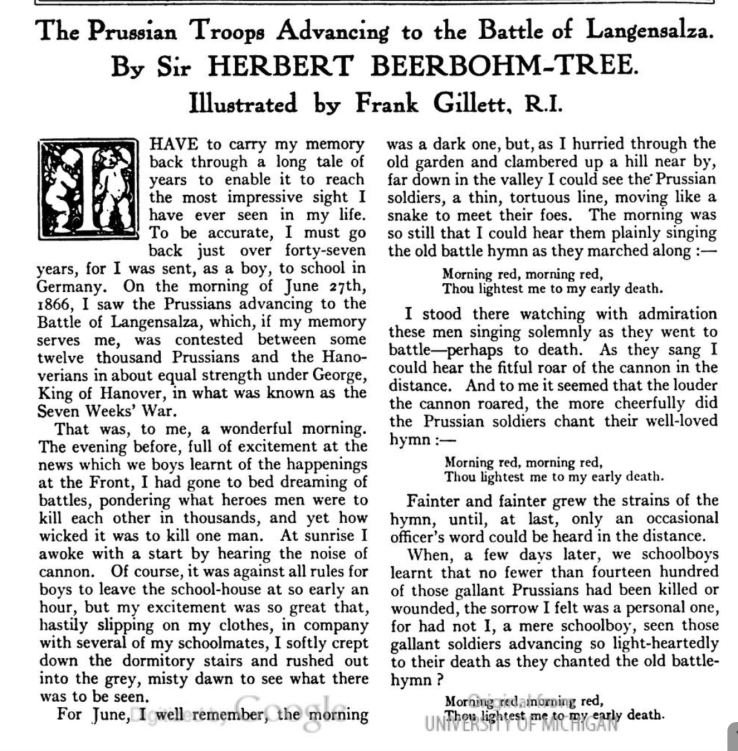 A curious little eyewitness snippet about the Austro-Prussian War 1866 from the Strand Magazine 1913.

The Battle that Herbert saw forming as a fourteen year old boy was part of the Austrian-Prussian War or Seven Weeks War of 1866.

The Battle of Langensalza was fought on 27 June 1866 near Bad Langensalza in what is now modern Germany, between the Kingdom of Hanover (Hanoverians) and the Prussians. The Hanoverians won the battle but were then surrounded by a larger and reinforced Prussian army, and, unable to link up with their Bavarian allies to the south, they surrendered. This marked the demise of the Hanoverian Army and the annexation of Hanover into the burgeoning kingdom of Prussia as it systematically unified Germany into the modern nation state. …

Another long lasting result of the Battle of Langensalza is the use of the “Red Cross” by medical personnel. Created by the First Geneva Convention in 1864, the Red Cross began an international humanitarian aid group. This organization, which would later greatly expand in size, was originally very small. Involving just thirty trained volunteer nurses from Gotha, the first actual combat mission of the Red Cross occurred on the Prussian side at Langensalza. (Wikipedia source)

I hope Herbert Beerbohm Tree’s account is of interest to this who are interested in the Austro-Prussian War.