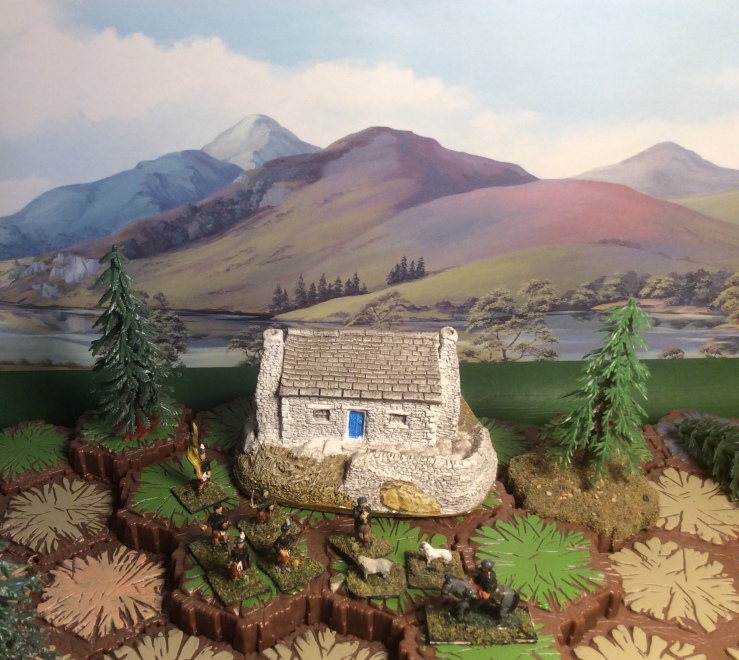 After a cool early morning stroll through my nearest local village I walked past a fundraising car boot sale. I was tempted to start a small Sylvanian Army by equipping small furry clothed creatures with shields, swords and spears (Redwall style) but kindly left them all to be discovered with delight by a  local child.

Instead I bought a Scottish Croft for a Pound.

Thankfully I don’t now have to upsticks and move Northwards to embrace the Good Life of Self Sufficiency anytime soon, only to find both the off-grid smallholding novelty and the delusion wear out quickly. Then write a book about it.

Or maybe not – because it is a very very tiny Croft House and a very small piece of land. It also comes with a tiny flock of sheep built in!

Instead I moved in some suitably tiny tenants into this little resin Lilliput Lane building – some of my vintage 15mm Peter Laing 1715 or 45 Rising figures. I’m not too sure if they are happy about the sheep or the related Highland Clearances that will follow in the next century.

Those precious few Peter Laing sheep have a lot to answer for! Posted when I thought only had one surviving 15mm sheep: https://manoftinblog.wordpress.com/2016/06/29/peter-laing-sheep/

Crofting, Clearances, Sheep or People?
The Highland Clearances (or  the “eviction of the Gaels”) were the forced evictions of many tenants in the Scottish Highlands and Islands, mostly in the period 1750 to 1860.

“After the initial swift and bloodthirsty retribution for the Jacobite rebellions, laws were instigated to prevent any further groundswell of support for the previous monarchs. In 1747 ‘The Act of Proscription’ was passed. Clan tartan had become popular during the Jacobite years and this was outlawed under this new act, as were bagpipes and the teaching of Gaelic. The Act was a direct attack on the Highland culture and way of life, and attempted to eradicate it from a modern and Hanoverian-loyal Scotland.”

The article continues:  “It was not only Highland culture that disappeared over this period but also the Highlanders themselves, for the most prosaic of reasons: money. It was deduced by those landowners on whose lands the clans lived and worked, that sheep were exponentially more financially productive than people. The wool trade had begun to boom and there was literally more value in sheep than people. So, what followed was an organized and intentional removal of the population from the area. In 1747, another Act was passed, the ‘Heritable Jurisdictions Act’, which stated that anyone who did not submit to English rule automatically forfeited their land: bend the knee or surrender your birthright …”

The hundred or so years between 1750 and 1860 saw the bulk of the Highland Clearances, forced eviction from farms or a move into alternative Crofting tenancies. For many, it led to eventual forced emigration to avoid famine and failed industries like kelp farming. It is still an emotive area of many people’s family histories scattered around the world. https://en.m.wikipedia.org/wiki/Highland_Clearances

So a Scottish Croft for only an English Pound has a lot of complex and partisan economic, social, colonial and military history lurking behind it.

With such big spending, I could have posted this blog post on Pound Store Plastic Warriors.

Two other wargames blogs on a 1:72 Jacobite theme

For more of my Lilliput Lane buildings of this sadly vanished uk manufacturer: https://manoftinblog.wordpress.com/2017/06/11/lilliput-lane-buildings-for-15mm-figures/

Now back to researching those early Scouting handbooks and Wide Games scenarios. Scottish Scouts were allowed to wear kilts.