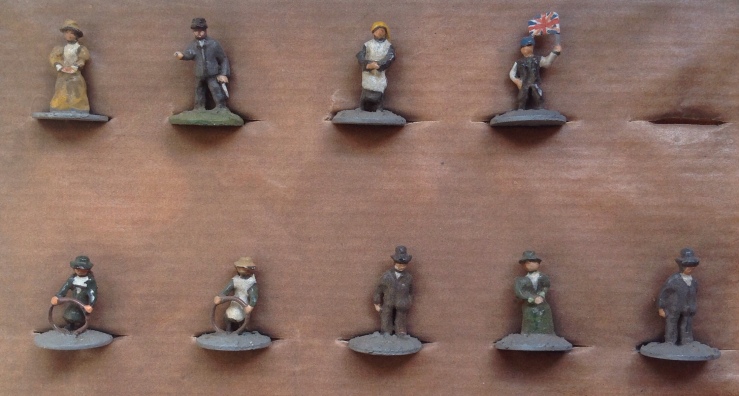 I was alerted to the online sale of this small box of John Mitchell Military Miniatures, thanks to Stephen Prentice. Stephen had seen my previous entries on John Mitchell box sets and buildings.

Some of the figures IDs are obvious – I had heard of the Victorian girl with hoop F7051 and Victorian boy with flag F7052 so I was confident that these probably were Peter Laing figures as best I could tell from the small online sales pictures.

The missing figure of the eight is possibly a duplicate of the girl, standing man or boy with flag? As one of my family pointed out, in keeping with today’s pulp fiction / Victorian Science Fiction VSF gaming, this might also be an ultra-rare, uncatalogued Peter Laing 15mm figure of The Invisible Man.

Hopefully my fellow Peter Laing collectors will assist me in identifying the other figures, which are presumably:

F7050 Civilian female standing – presumably the female figure with the hat or bonnet?

This still leaves unidentified the standing woman or older girl without hat and the man with hat and gesticulating arm on the odd-one-out green base.

Female figures are pretty rare in the Peter Laing range of figures. As part of FEMbruary looking at female figures in my collection, there  is

F8006 a Cantiniere in the Franco-Prussian range,

F9013 a peasant woman in the late Samurai series

F6009 a European woman (Memsahib)  in the Indian Mutiny range.

Any  of these might be in this box masquerading as Victorian Civilians.

Handling the box itself was interesting, it felt like the same flimsy card on which his card buildings were printed. The box is in fact a single sheet of A4 printed card cleverly folded. Unfortunately they were printed with a spelling mistake or printers typo of “Minatures” instead of “Miniatures”. 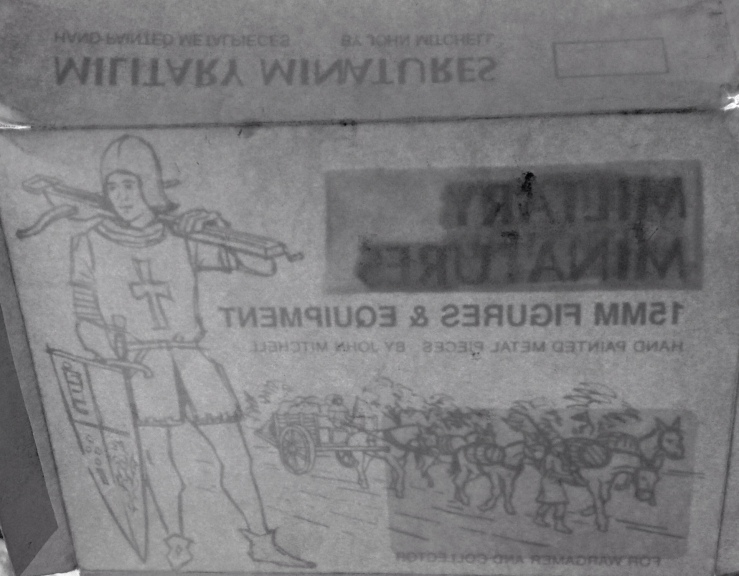 Fascinating to have one of these Mitchell sets and best of all, some delightful Peter Laing figures I thought that I would never own.

I asked in these previous John Mitchell / Peter Laing related blogposts if any reader had bought one of these painted sets. Alec Green bought these delightful Indians from an online auction site.

These well painted Peter Laing figures shown in the box appear to be:

The hand drawn box lid is similar in style to the ECW starter rules and advert by John Mitchell posted previously – see blog links above.

John Mitchell recently passed away in June 2016, aged 83 in Malvern.

John Trevor MITCHELL of Ledbury, formerly of Hook Bank Park and Malvern, passed away on June 19th, aged 83 years. Beloved husband of Janet and much loved dad of Sally. Will be sadly missed by all Family and Friends. The Funeral Service [was] held on Wednesday June 29th, 2016 at Hereford Crematorium. (Published in the Malvern Gazette on 24 June 2016)

Thanks to Alec Green for sharing the photos.

Posted by Man of TIN.

As mentioned in my previous tribute to the late John Mitchell,

here are two of my surviving unmade John Mitchell buildings photographed so that fellow Peter Laing enthusiasts can build again and attack or defend their own John Mitchell tribute town.

What finer tribute can there be for a wargames designer’s products than for them to live on and give pleasure long after him?

My original John Mitchell card buildings from the 1980s have not survived.

Luckily two of my spare original sheets have survived. I scanned and printed these onto card to preserve the originals.

40 years after they were designed in 1976 by John Mitchell, these buildings are back being made on my cutting board. They were first designed not long after Peter Laing launched his first 15mm figures in 1972.

I remember making this farmhouse before c. 1983 and had few difficulties.

The farmhouse chimney sits a little oddly, so needs an additional flap added along on its left side before you cut it out.

Additionally a larger fold-over flap at the top of the single house wall with door is needed to get a level roof; just align the new flap with the height of the other wall with a door.

John Mitchell made suggestions for adapting the basic card model as “base for experimentation e.g. Painting walls in poster colour, texturing walls and roofs in plastic filler and adding beams and window frames in balsa wood.”

John mentioned his intention to work across “all periods of history” towards “Castles, and other large constructions” not just these slightly humbler 15mm dwellings.

Launching his buildings not long after Peter Laing launched his first 15mm figures in 1972, the only other building I came across mentioned (but sadly never bought) was the JM5 desert type dwelling mentioned in this Peter Laing advert in the early to mid 80s, a snip at 40p.

Not sure what the Barrack Room range was.

So if JM1 was the Elizabethan house, JM2 the Farmhouse / Barn and JM5 the Desert building, does anyone know or can show what JM3, JM4 and JM6 onwards were?

Enjoy building your John Mitchell tribute houses and may you have many happy hours with these as a pivotal battlefield feature to defend or attack in John Mitchell’s memory.

As a tribute to the late John Mitchell, one of figure designer Peter Laing’s colleagues in early 15mm wargames products, who died in June 2016, I am posting my battered copy of what I believe are John’s typed English Civil War 15mm starter rules (with my childhood pencil additions).

As far as I can remember, these rules were bought from Peter Laing c. 1982/3 and are focussed around the figures and artillery (A501 Culverin, A502 Saker) in Peter’s English Civil War ranges.

As far as I know, the rules have probably not been sold for many years since Peter Laing and John Mitchell retired. They are posted here in tribute.

The advert here does not mention ECW specifically …

… but in this advert from Military Modelling October 1983 it gives more details:

Send no SAEs for details, as sadly John Mitchell has passed away but how many wargames enthusiasts started with one of these sets?

Hmm, If you could whizz back to 1983 in my Man of TIN Tiny Tin Time Machine, which starter army or armies would you choose?

Did you get figures for both sides, so both Roundhead and Cavalier?

I presume many of the starter set figures came from the Peter Laing range. The historic periods covered in the adverts match Peter Laing’s extensive 15mm catalogue well, including his trademark Marlburian figures, the unusual Crimean and Franco-Prussian War ranges and the smaller, almost half to a third of the cost for the WW2 starter set as Peter Laing only made a small WW2 infantry range which we have featured on another blogpost. The costs varied quite a lot in price!

If anyone was lucky enough to be bought or to buy one of these 15mm Starter Armies, I  would love to hear more about them in detail. Did they spark a lifelong gaming interest? Did it lead to a wider collection of Peter Laing figures? I hope that you liked them, although Peter Laing figures have both admirers and their detractors on many gaming and figure forums.

These rules were an interesting specific set for the ECW to supplement the simple rules for other periods available in early Donald Featherstone books. They served me well for my first few teenage years of English Civil War gaming.

The supportive business relationship between John Mitchell and Peter  Laing is hinted at often throughout Peter Laing’s catalogue:

Hopefully John Mitchell’s hand painted 15mm starter armies were the introduction to the scale and our hobby for many of today’s gamers.

John Mitchell, remembered wherever and whenever his hand-painted starter sets  of tiny 15mm metal soldiers fight for his card buildings, by  happy gamers across the world enjoy “a most satisfactory infantry action game.”

I only bought these four sample 15mm World War Two figures from Peter Laing back in the 1980s and now wish I had bought more.

Peter’s range was very limited, British and German infantry and some American infantry which I never bought.

These Peter Laing metal 15mm figures had to compete for my limited pocket money with the burgeoning and cheaper 20mm plastic figure scene (Matchbox, Esci, Atlantic, erratic Airfix) in the 1980s. I wish now that I had chosen differently, although my love of cheap plastic figures still extends to Vintage Airfix, Britain’s Deetail (not so cheap), Atlantic Wild West figures and pirated / pound store plastic warriors.

Luckily I am now collecting and painting my way towards Peter Laing WW2 infantry tiny skirmish games “at platoon level … To give a most satisfactory infantry action game” as Peter Laing describes it in his catalogue.

I have been lucky enough to spot some distinctive Peter Laing WW1 and WW2 figures in job lots of other 15mm figures recently.

As far as WW2 rules go, I have always opted for bits from Donald Featherstone / Lionel Tarr’s simplest WW2 rules in Featherstone’s 1962 book War Games. I look forward to a “mash up” with his Featherstone’s Close Wars Rules appendix to War Games. https://manoftinblog.wordpress.com/2016/06/09/close-little-wars-featherstones-simplest-rules/

The bulk of the WW1 Peter Laing Germans in my collection are wearing Steel Helmets and carrying rifles, so will easily suit. A couple of Peter Laing WW1 maxim guns F746 and loader gunners  F747 will pass muster for German Machine Gunners with Steel Helmets.

These rules for natives versus troops will require a little  alteration to incorporate machine guns, light mortars, small field guns and motor cycles! No natives but plenty of awkward terrain and no vehicles. Still an infantry slog!

The various WW1, native  and late Colonial figures I have would also make an interesting African campaign:

” Few collectors seem interested in World War 1 , although there is much of value to be found in the battles of 1914 and 1915, before the war bogged down in a mass of trench warfare – a fascinating little campaign can be made of the German East Africa fighting in which natives can be used.” Donald Featherstone, War Games (1962) , p. 20.

These figures came with a small online job-lot  of what may be Peter Pig 15mm WW2 figures, some of which are similar in style and scale to Peter Laing figures. There are a number of peaked cap officers, some French resistance ladies and some paratroops with bikes to add some variety. It may be possible to mix a few of these in as needed with the Peter Laing figures. Peter Laing purists, look away now!

I even have a few surviving unmade card sheets of John Mitchell’s card buildings to make up to match Peter Laing’s catalogue suggestion that “these items can be used in conjunction with John Mitchell’s building sheets … to give a most satisfactory infantry action game.”

A lovely couple of posts on the  Tims Tanks blog about meeting with Peter Laing and showing some of his WW1 / WW 2 range.  I too found Peter Laing was always very helpful, encouraging and efficient dealing with young gamers with small pocket money orders by post. Often Peter included a free sample figure or two from his new ranges to offset breakages and postage costs – and no doubt to tempt more purchases.  Smart marketing!

Note some  interesting post blog comments (June 2016) that the elusive Peter Laing moulds may have turned up in the collections of the late John Mitchell with many Peter Laing figure fans interested in re-establishing these ranges. Me too!

But which ones would you produce or buy first?