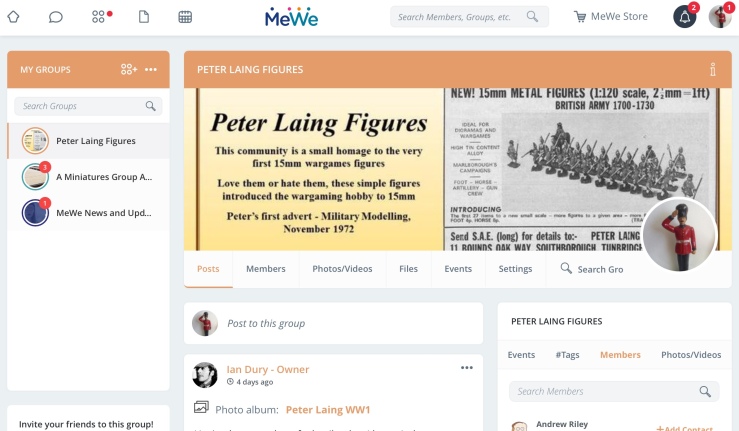 Welcome to the new Peter Laing community on Me We, home to many Google+ refugees https://mewe.com/join/peterlaingfigures

Thanks to Ian Dury.

There will no doubt be more gaming and figure related MeWe groups https://mewe.com/join/aminiaturesgroupaboutwargamesandtoysoldiers

In gaming, if you’re not sure what to do, it’s generally wise to make a rule  and roll a dice.

Equally some wise advice I remember from someone’s ‘black dog’  post – if you’re not sure what to do next, undercoat stuff.

I’m busy undercoating Peter Laing 15mms today. I was reminded that I had not painted or posted about Peter Laing figures for a while by the imminent closing of the Peter Laing Community pages on Google Plus and many people’s migration to the social media platform Me We. You can find like-minded Laing enthusiasts  on the Peter Laing section set up by Ian Dury: https://mewe.com/join/peterlaingfigures 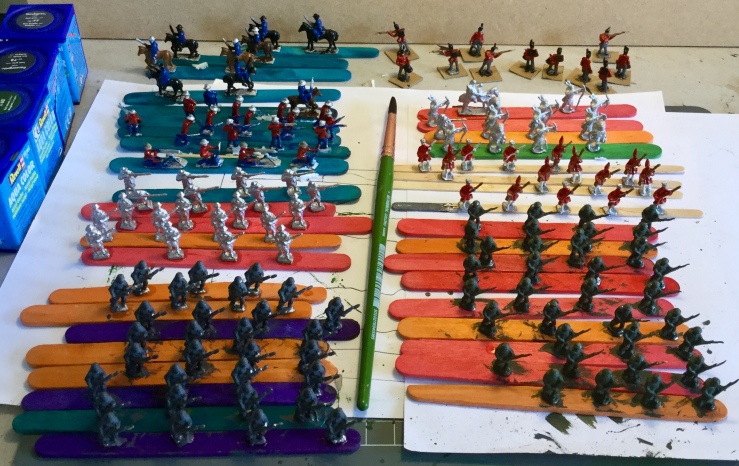 Eagle eyed readers can spot about 30 WW2 German infantry that I intend to have use as paratroops, along with about the same number of WW2 British Infantry riflemen to double up as Home Guards.

I feel some 1940 /41 ‘Sealion’ type Skirmish rifle platoon  scenarios coming up in future, joining my small number of Laing WW1 and WW2 figures that are so far painted and based. https://manoftinblog.wordpress.com/2016/10/02/peter-laing-15mm-ww2-skirmish/

A cluster of backwoodsmen and settlers in buckskins will double up as Confederates and Boers, useful from French Indian Wars through the war of Independence,  Civil War and beyond. Versatile figures! Likewise there are a small number of very useful Native Americans with bows and arrows.

A few more redcoats in slouch hats as Mounties for Skirmish and Imaginations Games. Some Union or Seventh Cavalry or more Mounties  on horseback to join my few finished ones https://manoftinblog.wordpress.com/2018/11/30/mountie-ambush-game-15mm/

A few strips of redcoats in tricorne hats and grenadiers, along with a mixed handful of British Napoleonic era Infantry.

A mixed bag, some of whom have been waiting patiently on the painting table for a long time.

Getting my eye back in to painting 15mm after a long period on 40 to 54mm seems  a bit strange.

If you’re not sure what to do next, undercoat stuff. Wise words indeed …