I cannot remember how I first came across this 2016 CD of recordings of Napoleonic music played by the Bate Military Ensemble on original period instruments from the Bate Collection at the University of Oxford.

I thought it might make an interesting quirky present for a relative with an interest in Napoleonic history. Tracks unheard, I bought this a few weeks ago for the very reasonable price of £10.50 plus postage from the University of Oxford online shop:

This is the back of CD blurb and liner notes track listing: 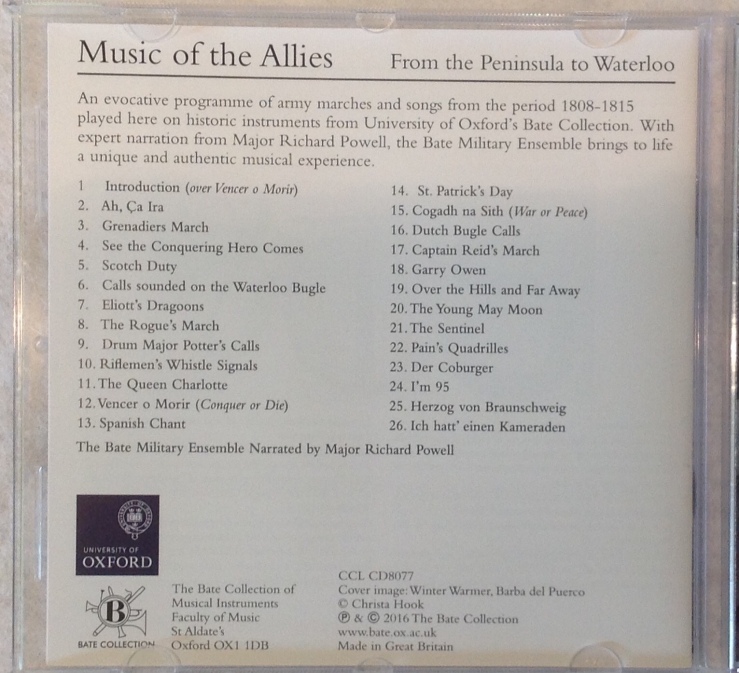 As I bought this tracks unheard, before I send this CD off as a present, I had second thoughts and opened the shrinkwrap to listen to a few tracks to check this CD out in case it was not suitable.

I was impressed enough by what I heard. There is a short spoken introduction to each track or bugle call by Major Richard Powell. There are also extensive liner notes by Colin Dean with fascinating details of the songs and instruments.

As well as French and British marches and songs, the Allies part of the title covers other marches and songs from nationalities who fought against Napoleon including the Dutch and Prussians. It finishes with the well-known tune “Ich hatt’ einen kameraden”.

Major Richard Powell explains the different trumpet, bugle or fife calls used by cavalry or infantry. The fife or whistle infantry and rifleman calls sound like a form of Morse Code that would have to be carefully learnt by both musician and rank and file. Just as you may target Enemy officers, picking off their musicians, signallers or radiomen could cause similar chaos in the Enemy ranks. These often very young musicians were the “comms” of their day, giving officers the ability to pass on ‘coded’ orders in the heat of battle. The audio version of a signal flag, to rally around?

The film about Arnhem and Operation Market Garden, A Bridge Too Far, amply illustrates that well over a century later, without comms such as radios that work, you might be better off with a bugler or whistler!

There is lots of interesting material here – from the difference between sound quality and audibility over distance of brass or copper instruments, a bugle played at Waterloo by 15 year old Trumpeter Edwards, who joined up aged 9 years old to trivia nuggets such as where the phrase “being drummed out” comes from and what this sounded like.

For those gamers who enjoy having suitable films playing during games in the clubhouse or background, they might like this album.

For those like me who have a playlist of suitable period music to use whilst painting those era of troops, this is also a very good album.

Attractively packaged with the Christa Hook picture, informative liner notes, spoken introduction and good clear sound quality – if you are interested in vintage instruments, military music, signals and comms or the Napoleonic and Peninsula War period, this is an affordable and interesting addition to your music collection.

You can file it on the music shelf, right next to 1970 film soundtrack of Waterloo and the Sharpe’s Rifles soundtrack CD.

I hope my intended gift is suitably well received! 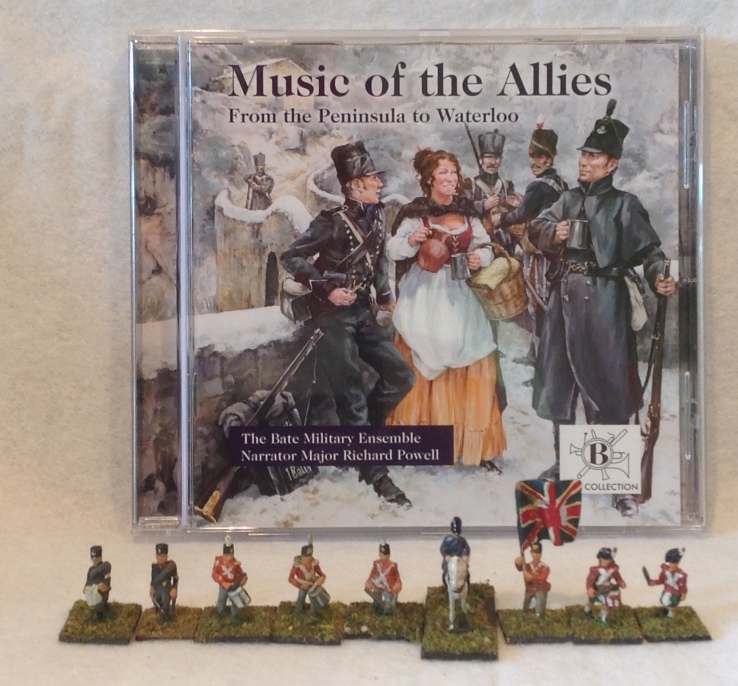