I am pleased to have a signed Featherstone volume of Complete Wargaming, this one dedicated to Dick Tennant, obviously released as the result of downsizing a lifetime collection.

This is one of two signed Featherstone books I have acquired over the last few years.

Featherstone’s Complete Wargaming came from a second hand seller for only £15 even though it was pencilled in next to the price ‘signed’.

I had no idea who Dick Tennant was.

Aha! Thanks to David Crenshaw at the Miniature Minions website in the USA, who has acquired some of the Tennant Napoleonics collection of figures, I now know who Richard Tennant is.

R.J. Tennant is one of the surviving original Donald Featherstone wargames conference circle from Southampton from the early 1960s.

On the back of a David and Charles catalogue flyer for the book, someone has noted some proofreading errors and some photo reversal mistakes. Written by Richard Tennant?

Alongside the Featherstone signature are some pencilled notes that I take to be Richard Tennant’s corrections. The pencil handwriting appears different from Featherstone’s signature and dedication. It exactly matches the handwriting in Miniature Minions’ blogpost about Tennant’s figures and research notebook.

Reading the MiniatureMinions blog post, there is much mention of the Peninsular War and even a mention of this windmill made by George Erik. 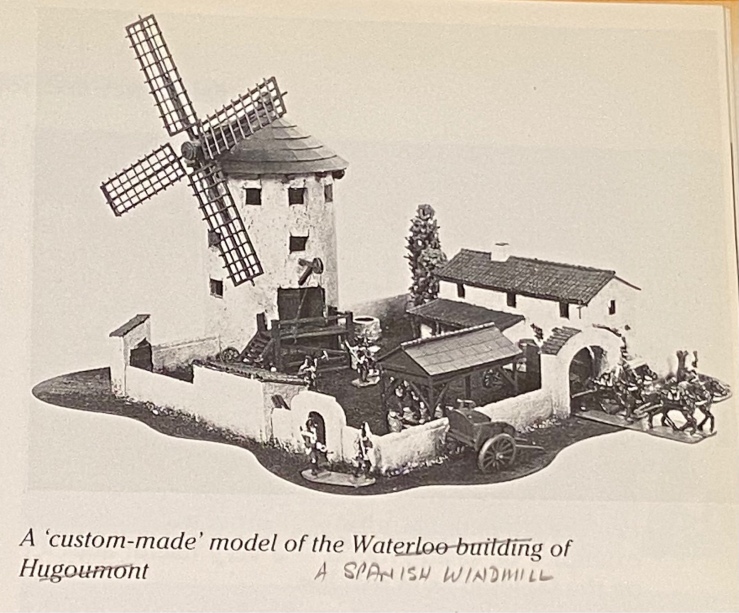 See the fly leaf pencil note about the “model illustrated on page 197 custom made by G.Erik photographed with own figures” – written by Richard Tennant

The Peninsular War appears to be a particular interest of both Tennant and Featherstone; I recall reading some of Donald Featherstone’s later articles about the battlefields in modelling or gaming magazines in the 1980s.

Featherstone’s Complete Wargaming has been reissued in a revised and corrected paperback version by John Curry of the History of Wargaming Project, working to correct some of these original printing and photographic errors.

As well as Richard Tennant, I have come across another of Featherstone’s early circle, one who is still blogging:

Rod’s Wargaming is by another still blogging member of this early wargames conference / community, Rod MacArthur has on his website some great pictures of 1960s Airfix conversions that sometimes involved Featherstone’s mould making help:

A little bit of Featherstone wargaming history, all still going strong and in use – I’m sure both Don and Dick would be pleased!

Reading again Robert Louis Stevenson’s toy soldier poem The Land of Counterpane on the Duchy of Tradgardland blog made me look again at some blog posts I had written about RLS’ toy soldier poems from A Child’s Garden of Verses.

I came across a link to these “old leaded soldiers” belonging to Robert Louis Stevenson at the RLS museum in California (currently closed due to Coronavirus):

Sounds a museum well worth a visit if you live nearby.

I wondered if there were pictures of these soldiers on their RLS Museum website or on the web of RLS’ “old leaded Soldiers”, RLS being a pioneer of early wargaming with his stepson Lloyd Osbourne, their battle or game reports written up stylishly in their “Yallobelly Times”.

I found this picture from the museum of these 19th Century (European? German manufactured?) tin flat toy soldiers with which RLS might have played these pioneer games.

Famous as the author of Treasure Island, Kidnapped, and The Strange Case of Dr. Jekyll and Mr. Hyde, Robert Louis Stevenson was also an early war gamer.

His role as ” grandfather” or “great uncle” in the history of wargaming (depending where you place H G Wells) was acknowledged by “father of the modern wargame” Donald Featherstone in his book War Games (1962), a book that began the hobby careers of so many of us.

Stevenson at Play, a magazine article describes a complex strategic wargame that the author and his 12 year old stepson, Samuel Lloyd Osbourne, played in the early 1880s which you can read reprinted here:

Stevenson’s complex game does not seem to have had the attention that H G Wells‘ Little Wars has had, even though despite the popgun driven firing system, there are many surprisingly modern features: four man units, concealed movement, ammunition logistics … well worth rereading.