Lots about the therapeutic and social side of gaming here, as well as the fascination of our gaming hobby in another part of the world. 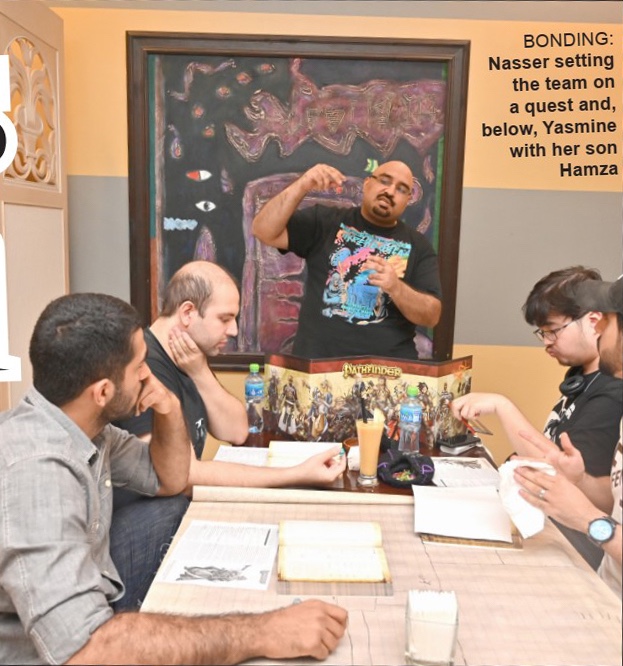 The kingdom’s popular gaming group, TableTop House Bahrain, aims to spark nostalgia, build social bonding as well as provide an escape from every day “adulting” by staging bi-monthly mini-conventions for young and old to enjoy.

The group, which is made up of various board gaming and role playing aficionados including Nasser Al Alawi, Mohamed Al Shirawi, Abdulla Sultan and Khaled AlDossary, have been hosting events since 2018 to share their childhood joys as well as to help develop the surface-playing scene across the island.

“Tabletop is any game played on a surface or table such as Monopoly or even Wargaming,” said Nasser, a 39-year-old real estate agent from Gufool who has been playing Dungeons & Dragons (D&D) since 1999. “Dungeons & Dragons is a tabletop role playing game where you play as an imaginary character using a character sheet that has stats and dice to determine failure or success.

“There are no boundaries to this game and it is a great way to fuel someone’s imagination.

“Tabletop role playing has been in Bahrain for 30 years thanks to the likes of Hamad Al Najar who, from what I remember, was the oldest dungeon master (DM). He started it up in the 90s and now we are passing on the torch to teach the next generation. We host these events to give the hobby exposure, offer people the experience and joy of playing these games, to show them that there is more than video games and how it can be a social gathering where people meet face-to-face and have a great time.”

The group, which is now led by Abdulla, 23, a banker from Juffair, recently held an event at Darseen Café, at Bahrain National Museum, featuring one-shot games. According to Nasser, one-shot is a game that takes from an hour to two hours where players are introduced to a scenario. “Basically, you have to play through that scenario until it’s resolved, whether it may be goblins attacking a village or rescuing a fair maiden; the usual fantasy trips that are available,” explained Nasser. “Some people played D&D, I ran the Pathfinder game and other people featured other systems. There was even a Star Wars tabletop role playing game and another person ran Starfinder.”

Around 100 aspiring and dedicated gamers attended the event including the kingdom’s first female DM Kirsten Hofstad.

The 32-year-old teacher who lives in Mahooz has been playing D&D since she was 12. She said: “It’s a great way to meet people and make friends. I first started being a DM when I lived in Thailand and wanted to find a role playing group. I decided to try my hand at it since finding a DM to run the game is the hardest thing to do. I discovered that I really enjoy being a DM more so than playing the game. I have been a DM for eight years now.”

Yasmine Bouroubi, 31, a teacher from Janabiya, sat in on Kirsten’s game as her children Hamza, five, and Zaynab, eight, and her husband Reda Ibn-Tahaikt cheered on. She said: “I like this game because it’s sociable, there is team work and you will meet people. I definitely think my children should get into this because they aren’t sitting in front of a TV and it’s all about face-to-face interactions.”

Other parents tend to suggest joining Wargaming, run by Radio Bahrain DJ Khaled, for its therapeutic and strategic aspects.

“Wargaming is a hobby that started by H G Wells,” said Khaled, 34, who lives in Hamala and started playing the game in 2015 before developing a group on Instagram @wargaming_bahrain. “It was an idea he had with a friend of his who was ill at the time. He wanted to find a way for them to both have fun. He took toy soldier figures from his nephew and developed a game using dice in combination with soldiers and measuring tape to move and simulate combat, which they were very big fans of because they were both historians who loved to read battels.”

“This hobby features two factors. Some people love to play the side of the game that’s throwing the dice and simulating battles. Then there are people who like to paint miniatures.”

There are recurring events such as paint nights. “We teach painting workshops and we get different ages playing this game too,” added Khaled. “Many parents want their children to do something tactile with their hands and then they will get to take the miniature soldier or figure that they painted home.”

People can follow @tabletophousebh to find out more about upcoming events as well as the weekly games run at The Raven’s Nest Café. Co-owner Mirna Almaz, 32, who lives in Seef, said: “We encourage people to leave their screens and technology behind and focus on using their minds to strategise, imagine and role play for the sake of entertainment. We all know the brain is a muscle and board games are considered exercise for one’s mind. These hobbies are also used to fight depression and anxiety; not to mention, strengthening social interaction and bonding.” [End of article]

Fascinating that boardgaming, RPGS, tabletop gaming and wargames of all sorts are played all over the world with much the same social and therapeutic benefits. And if you’re ever passing through Bahrain in need of a game …