When I was a youngster, my Dad would bring back Military Modelling, the occasional Airfix Magazine and then Miniature Wargames each month when it first came out in the 1980s. No doubt he read and enjoyed them on the train home for the history articles. I still have many of them in part or whole. Thanks Dad!

So I was interested to read the wargames magazines reviews and comments on various blogs including Bob Cordery on Wargaming Miscellany as the magazines have changed audiences and editors over the last few years.

I wrote a little about this back in 2016, having not read many gaming magazines for years: https://manoftinblog.wordpress.com/2016/07/30/miniature-wargames-magazine-milestone-issues-1-and-400/

Many of the recent comments on the changing nature of some magazines seemed to fall into a generational trench or historical vs fantasy gaming camps, the recent editorial and ownership changes to Miniature Wargames magazine having polarised opinion.

Some confess to fall no back in love with print magazines like Big Lee:

For a fringe or niche hobby, it is a surprise to me that there are still in 2019 three colour wargames magazines on the newsagent stands alongside two toy soldier collector magazines and all the tabletop and fantasy gaming magazines.

I usually flick through these magazines when I go into town to see if they are ‘worth buying’.

Irritatingly, some are shrink wrapped issues with free gaming show catalogues or free sprues of the latest plastic figures (i.e. clever product placement) so that you cannot see inside some of the magazines.

This freebie is calculatedly and temptingly an effective entry level drug to a new period, scale or games system, clever but something new that I simply do not need with a head and a paint table already full of ideas.

There is also a QR code on the front cover to scan to see the contents page, if you have that sort of phone (which I don’t). It loses Wargames Illustrated Magazine and Miniature Wargames one potential reader every month.

Like many of those who comment on the review posts, which is obviously just one slice of opinion, I am regularly put off buying several of these magazines over the last twenty years by the increasingly advertorial scenarios for certain games systems and figure ranges.

If you don’t play those systems, this style of magazine article seems almost meaningless.

I do like a look at the adverts and new figure ranges, although quite often they are featured long before on the websites of other bloggers, excitedly distracted by the next new shiny thing.

One interesting feature in the most recent Wargames Soldiers and Strategy WSS magazine www.wzssmagazine.com is the thematic approach to the core articles of each issue. A few months ago I bought the French Indian Wars issue as this is when my favourite Featherstone Close Wars small wooded Skirmish (natives vs soldiers) rules are set. This month I bought the mostly WW2 1944 issue – theme: the Fight for Overloon and Venray.

I recognise a few of the opinion column writers from past magazines, blogs and podcasts such as Henry Hyde, former editor of Miniature Wargames and Battle Games and Guy Bowers the Editor.

I enjoy the Guy Bowers‘ figure reviews showing a sample of what figures in what scales are currently available to play for each issue’s main theme period.

Obviously not every manufacturer and every scale could be featured in such an article.

I noticed one surprise omission on the figures page for WW2 1944 Northern Europe scenarios, which covers the current fashionable scales from 6mm through 10mm and 15mm to the ubiquitous 28mm. (No 54mm?) One set of cheap and affordable figures were missing – there were no Airfix.

There were four other 20mm manufacturers mentioned, mostly metal – Adler, Frontline, Valiant plastics and Wartime Miniatures (Australia). Foundry 20mm are mentioned rather than shown. Some of these figures are £1.20 each!

But no Airfix. Why the omission? It could be because they are currently and irritatingly out of stock on Airfix.com and only available in shops or online suppliers if you can find them.

On the same basis, I’m sure the old Airfix 54mm figures are not shown in the review as their 54mm British Infantry (Combat Support Group) are hard to find in the shops and few now game in this scale. 54mm British Infantry are now fairly hard to find cheaply, but as for 54mm gamers, they are available to find online in one place at the Little Wars Revisited 54mm gaming forum. 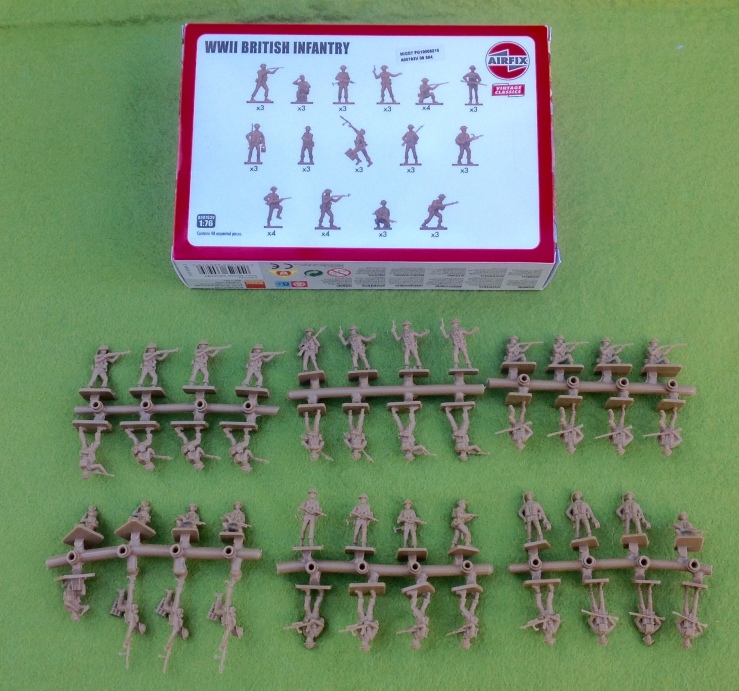 But No Airfix? This was maybe something I only noticed because a few days earlier on a trip into a real toyshop searching for family presents, I had picked up the latest ‘new’ Airfix figures in thirty odd years. Obviously latest and new meant 2011 – I hadn’t noticed that the 1973 ones had been replaced.

This type of cheap plastic figure is where many a gamer of my generation or older cut their teeth. The metals and plastics shown in Guy Bowers’ magazine review were or still are beyond pocket money range and easy access to many youngsters, even today through online sales. I was able to look at these Airfix figures and others closely in the shop. I paid hard cash for these figures. I bought a box of the new WW2 figures partly as I am a ‘Completist’ who owns Airfix figures from all the sets ever issued but mostly to show my support for real toyshops.

Airfix is still just about available in many of the larger hobby shops, craft and toy stores as well as these WW2 British Infantry (currently out of stock) at Airfix.com

£6 for a box of 48 figures seems reasonable, at roughly 12p each figure. As Bob Cordery mentioned, this is pretty much the cost of a magazine these days. They also come with an available Airfix relaunched ‘vintage classics’ range of WW2 vehicles, admittedly ones you have to make yourself.

The only 20mm alternative in plastic shown are the Valiant figures at £13 for 68 Miniatures. This is comparable value per figure, just a big outlay for maybe too many figures for a simple Skirmish game.

Airfix have issued several British Infantry sets over the years. Which do I like most?

Not these old ones – not the 1973 ones that were newly around when I was little, http://www.plasticsoldierreview.com/Review.aspx?id=25

These 1973 ones replaced the charming but odd 1960s Infantry Combat Group http://www.plasticsoldierreview.com/Review.aspx?id=53.

Didn’t really like the odd poses of these spindly 1973 ones much.

Not the 1982 Esci reissues under the Airfix name when Airfix lost the moulds for the 1973 Airfix British infantry http://www.plasticsoldierreview.com/Review.aspx?id=84

Here below is a better off the sprue photograph of the new 2011 Airfix British Infantry.

The review on Plastic Soldier Review is not flattering about the skinny legs, what should be shapeless but here skin-tight battle dress and poorly moulded weapons but they seem no more distorted than the average metal figures.

To me, they look a useful enough set loaded down with lots of haversacks, equipment and few useless weird diorama poses.

They are a good looking, animated set of figures which almost don’t look like Airfix. Shame that they don’t make them as copies in 54mm but there are the old Britains Paratroops, Britains Deetail and Steve Weston’s WW2 versions if you can find them.

They would be a good match for the Airfix WW2 German Infantry in either scale if you can track them down (also out of stock on Airfix.com).

At some point I will get a chance to paint these new figures. Painting table is a bit cluttered at the moment.

9 thoughts on “On Wargames magazines and ‘new’ Airfix figures”