This April of Lockdown and Furlough has been one of finishing what figures and projects that you have to hand, encouraged by Ann’s Immaterium Challenge to “Paint all the Crap You Own”. Ann’s challenge completes on May 3rd 2020.

What have I managed to paint or complete in this time from stuff that I owned before April 1st 2020?

First, I had a good look through my old gaming bits and bobs Blue Box from the 80s. I found lots of figures to finish over the next few weeks or months of Lockdown.

See what I rediscovered at: https://manoftinblog.wordpress.com/2020/04/11/unboxing-my-blue-box-of-1980s-gaming-figures-time-capsule-part-three

From this Blue Box, I have added some old ‘new’ units for skirmishes including a unit of Peter Laing 15mm English Civil War Pikemen to complete a ‘White Company’ with a flag, an officer and the pike half of the unit for the first time.

I started painting this unit in the mid 1980s. They are now finally based and equipped with pikes.

Finally based about 35 years after being painted …

The Blue Box was one source of unfinished figures. Another source of figures was a box where I stored random figures from job lots bought over the years, whilst searching for Peter Laing figures.

Some of these job lots were figures that were sold as painted scrap which I have turned into units from some ImagiNations ‘Forgotten Minor States‘ in Europe of the 18th and 19th century.

One of my favourite small FMS units, some of the Volunteer Militia of Thyer Brigadia

Stray figures can be allotted to these units as they appear, allotted by colour and head gear. You can see these scratch 15mm national units here:

I made up a border watchtower and some barricades:

Amongst the remaining 15mm Napoleonic scrap figures were a handful of painted and unpainted scrap American Civil War type figures from various makers in mixed uniforms. I based and painted these in grey as Confederates, generic rebels or Revolutionary forces. They have improvised themselves a dramatic Revolutionary flag.

Broken figures made a scratch rebel gun crew, using a cannon from the Napoleonic Risk board game.

Another ‘unaligned nation’ that can provide a threat or an enemy for any of these FMS Forgotten Minor States forces are a small number of 15mm painted colourful pirates of mixed makers found amongst job lots of 15mm figures.

Some guerrilla or sailor looking types in white shirts with muskets or rifles are generically useful.

Hopefully who ever painted these pirates, game worn as they now are, would be pleased to know that they are based and back in use. 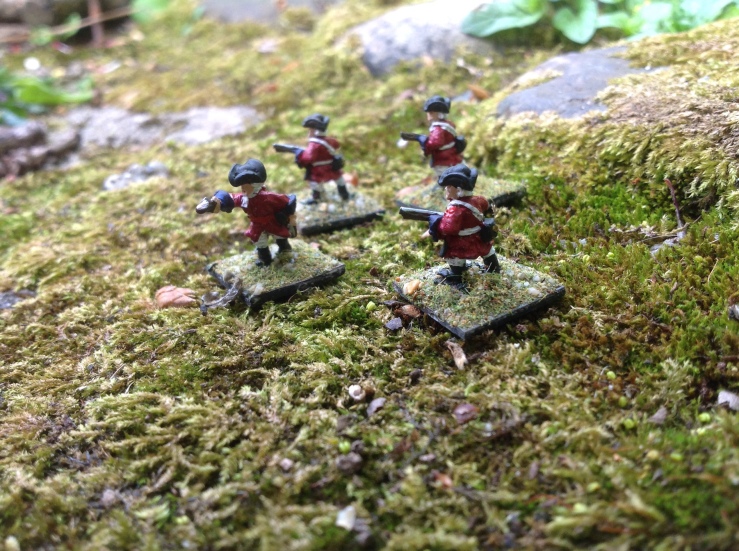 Amongst the pirates were lots of unpainted Tricorne figures with short muskets or carbines that could make a scratch unit of Redcoats or Preventive or Excise Men, the Riding Men or Dragoons. Not sure who made these 15mm figures.

These could double up for Close Wars type French Indian Wars skirmishes against natives in the forests of America.

No messing around with painting turnbacks, cuff or tricorne lace at 15mm scale. These are practical Redcoats roughing it in the forest wilds or along the cliffs and coast searching for Natives or Wreckers.

These have just come off the painting table, leaving some Jacklex ACW 20mm command figures from Christmas waiting their turn at the moment. 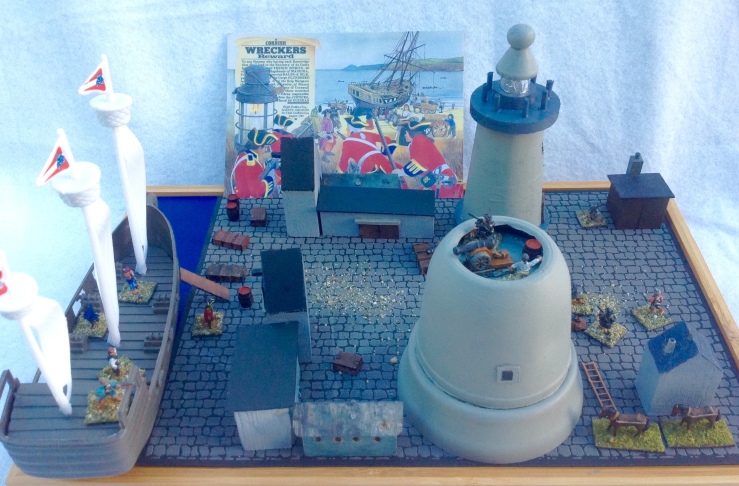 This portable Port, pirates and Redcoats was partly inspired by finding a Murray King postcard of Cornish Wreckers bought on a seaside trip a year or two ago. Redcoats! Smugglers! Wreckers!

Pirates and Preventive Men of the Customs and Excise need a port and this gave me a chance to use some wooden block scraps and wooden buildings from Christmas adapted into warehouses.

Ports need protection and sailors need proper lighthouses to avoid the false lights of the wreckers, so a craft shop lighthouse was added in wartime grey.

Coastal protection requires a Martello Tower for which the scraps and recycling box provided the materials. See how I made this in more detail at

Add to this in April I put Man of TIN onto Twitter @ManoftinMark and joined new Facebook groups about ImagiNations, Homecasting and Prince August castings.

Busy old Lockdown month – lots of stuff in storage finally painted and based.