The gift from Tony Adams in 2019 of a small box of unwanted old Airfix OOHO figures keeps on giving.

This time I repaired and based a handful of some old battered Infantry Combat Group figures which Tony had painted grey but with colourful yellow and blue hats.

They reminded me of some of the oddly coloured helmets in our family collection of OOHO sized Airfix, often also yellow or blue helmets. I have no idea why. It obviously meant something at some time.

I thought Tony’s few figures could stay grey and keep their colourful original painted helmets, becoming vintage Airfix figures which are flocked and based in a modern way using Warbases MDF penny bases.

Oddly some books and websites say that the Airfix Infantry Combat Group came out in 1959 (others say 1960) so we’re issued possibly a year earlier than their opponents the German Infantry (version 1).

It wasn’t uncommon in early Airfix figures for Enemy or opponent troops to emerge a year or two later. Foreign Legion had to wait a few years for the Arabs, US Marines had to wait a year for the Japanese etc.

Many comment on the Infantry Combat Group’s modern rifles and helmets as being 1950s issue, certainly the National Service uniform of my late father.

So even if the WW2 German Infantry appeared alongside them in 1960, these Infantry Combat Group could still be painted as generic 1960s Enemy Cold War Troops (Russians, Tintinesque ImagiNations, etc) 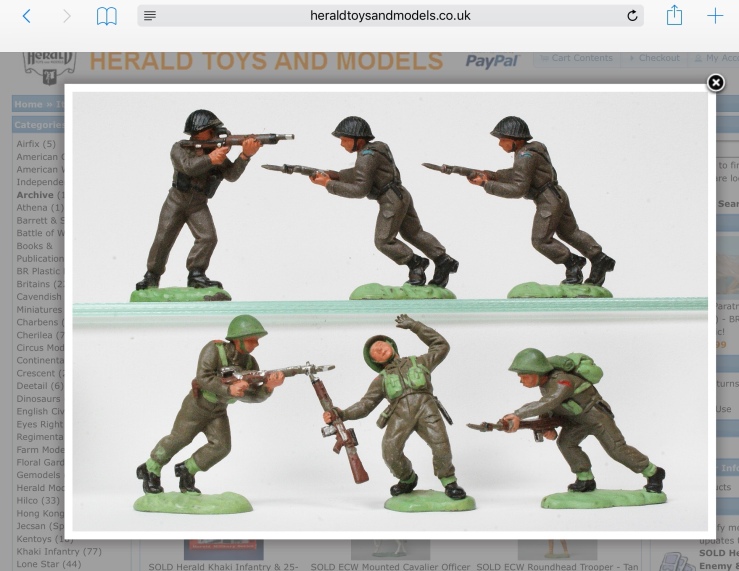 Rather than paint them green and add Tony’s battered figures to what is left of my few dozen Infantry Combat Group, I wondered whether they could stay grey and represent “the enemy” for training purposes.

This was a clever trick that Britain’s Herald did with their Fifties plastic khaki infantry – just paint them grey with black webbing as the Enemy.

These photos are from the excellent Barney Brown Herald Toys website and web shop.

I had a number of the Herald Khaki troops as a child and have since acquired a few more in dribs and joblot drabs but I have never seen the Enemy Troops grey variant in the flesh (or plastic).

Different coloured dyed uniforms were part American troop training and exercises in the 1950s, used as the enemy “Aggressor Troops”, speaking Esperanto – see the latter part of the blog below:

Tony Adams also passed on as well as battered unwanted Version 1 Airfix, some Revell German Horse Drawn Artillery (he has a longstanding interest in logistics and horse-drawn troops, shown in his Miniature Wood Screw Army website) and some Esci British Napoleonic Artillery. These will join my various ImagiNations once painted up. Thanks Tony!

Back into action, I look forward to bringing them back into gaming use again after fifty or more years.